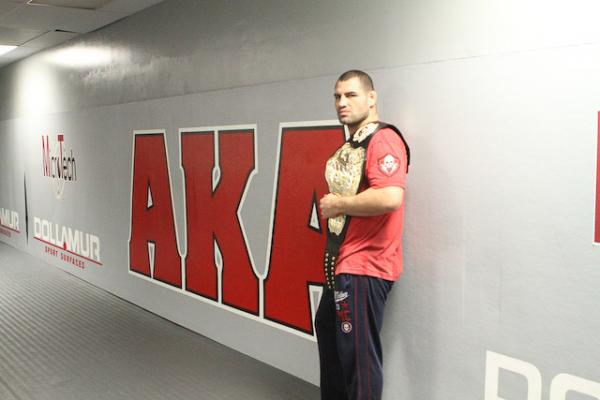 Velasquez removed any doubt as to who is the best heavyweight in the world by administering a brutal beating to Junior dos Santos at UFC 166. The final bout of the trilogy was never really in doubt, as the American Kickboxing Academy representative dominated in the clinch and rarely allowed his opponent any space to unleash his formidable boxing. While Velasquez was expected to next defend his title against Fabricio Werdum, that matchup will have to wait, as shoulder surgery could keep the champion on the shelf until late 2014.

No one can question the heart of “Cigano,” but the former heavyweight titleholder is likely to remain exactly that as long as Cain Velasquez sits atop the division. The Brazilian was unable to deal with the constant pressure of the American Kickboxing Academy standout at UFC 166, eventually losing via technical knockout in the fifth round. Despite back-to-back lopsided defeats to Velasquez, dos Santos remains a clear No. 2 in the weight class.

Werdum proved he is deserving of serious title consideration at UFC on Fuel TV 10, as he became just the second man to ever submit Antonio Rodrigo Nogueira, forcing “Minotauro” to tap to an armbar in the second round of their June 8 headliner. Unfortunately for Werdum, shoulder surgery could potentially sideline Velasquez for most of next year. He has said he is willing to wait, but it remains unclear if the Brazilian will receive another opponent in the interim.

A significantly lighter Cormier kept his unblemished record intact at UFC 166, cruising to a clear-cut unanimous verdict over Roy Nelson in the co-main event. Cormier departs the UFC’s heavyweight division with a 2-0 record. His 205-pound debut will take place against former champion Rashad Evans at UFC 170 in February.

Normally a tie is likened to kissing one’s sister, but try telling that to “Bigfoot.” In one of the UFC’s most memorable heavyweight slugfests, the massive Brazilian traded blows with Mark Hunt for a full 25 minutes. When the dust had settled, the two bloodied big men had battled their way to one of the most satisfying draws in history -- so satisfying that an immediate rematch is not necessarily a guarantee.

After more than 4,000 days away from the Octagon, Barnett reminded everyone why he is one of the world’s best heavyweights at UFC 164. The expected grappling duel with Frank Mir never transpired, as “The Warmaster” controlled the abbreviated heavyweight clash in the clinch, finishing his opponent with a vicious knee and punches on the mat. The former heavyweight ruler next meets Travis Browne at UFC 168.

Mir’s highly anticipated showdown with Josh Barnett was over before it could really get going. Barnett battered Mir in the clinch, landing punches, elbows and knees before one final, thudding knee strike swiftly dropped the Jackson’s Mixed Martial Arts representative. Barnett sealed the victory with follow-up punches, giving Mir three straight defeats for the first time in his career. It could very well be do or die for the jiu-jitsu ace in his next bout, as he clashes with Alistair Overeem on Feb. 1.

Nogueira continued his recent trend of alternating wins and losses, as he followed an October 2012 triumph over Dave Herman with a submission defeat to Fabricio Werdum at UFC on Fuel TV 10. Do not expect the 37-year-old “Minotauro” to hang it up anytime soon, however. Although he may no longer be a title contender, Nogueira is arguably Brazil’s most beloved fighter and should continue to catch marquee fights in the UFC.

Despite a flashy record and more than his share of dominant victories, Browne entered his co-headlining bout with Alistair Overeem at UFC Fight Night 26 as a relatively unknown commodity. Some serious resilience followed by a highlight-reel front kick did plenty to change that perception, however, as Browne’s first-round stoppage of the “Demolition Man” has made the 6-foot-7 Hawaiian a significant player in the heavyweight division. Browne will look to continue his ascent on Dec. 28, when he locks horns with Josh Barnett in Las Vegas.

Onetime title contender Gonzaga has surged back to relevance with three resounding wins in 2013. After an April loss to Travis Browne, “Napao” has finished two opponents in a combined 1:50, punching out Dave Herman at UFC 162 before demolishing Shawn Jordan at UFC 166. Gonzaga will attempt to continue his resurgence against Stipe Miocic at UFC on Fox 10.