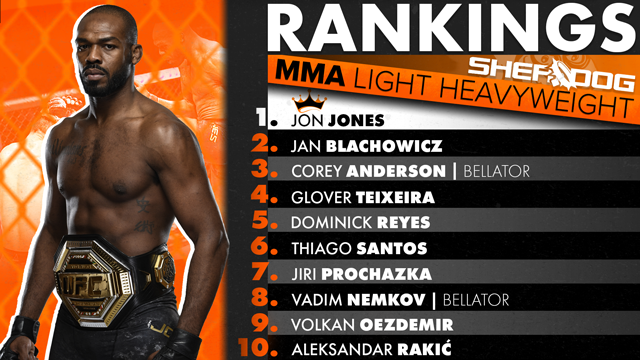 The competition is catching up to Jones, but it hasn’t surpassed him just yet. “Bones” survived by the skin of his teeth at UFC 247, as he edged Dominick Reyes in a unanimous verdict in the evening’s headliner at the Toyota Center in Houston. In a fight that many observers scored in favor of Reyes, Jones was able to sway the judges’ scorecards with consistent forward pressure and a strong push in the championship rounds. The hard-fought triumph gives Jones 14 victories in championship fights, the most in the history of the Las Vegas-based promotion. After some public back-and-forth with the UFC and Dana White, Jones vacated his light heavyweight strap in August, signaling a new era for the division. A move to heavyweight looms, and Jones could step right into a title shot in his debut.

Somewhat of an overlooked commodity heading into UFC 253, Blachowicz became the 13th light heavyweight champion in promotion history, as he dispatched Dominick Reyes via second-round technical knockout in the evening’s co-headliner in Abu Dhabi on Sept. 26. After beginning his UFC tenure 2-4, the 37-year-old Polish star has won eight of his last nine Octagon appearances, with his latest triumph ushering in a new era in the light heavyweight division. A champion vs. champion superfight against Israel Adesanya is up next for Blachowicz at UFC 259 on March 6.

As expected, Anderson rolled through his promotional debut at Bellator 251 with ease, stopping 44-year-old Melvin Manhoef with elbows from top position in Round 2 of their headlining clash in Uncasville, Connecticut on Nov. 5. While the matchmaking for Anderson’s Bellator debut was curious, it allows “Overtime” to move past a KO loss to Jan Blachowicz at UFC Fight Night 167 in February. Anderson has won five of his last six professional appearances and looks to be a stern potential test for Bellator champ Vadim Nemkov.

Even at 41 years old, Teixeira keeps finding ways to win. The veteran Brazilian managed to avoid prolonged standup exchanges with Thiago Santos in the UFC on ESPN 17 main event en route to a third-round submission victory. That makes five straight victories for the rejuvenated Teixeira, who is positioned to earn his second light heavyweight title shot more than six years after falling to Jon Jones at UFC 172. First, He’ll have to wait and see if the promotion books reigning champ Jan Blachowicz against Israel Adesanya.

After a narrow loss to Jon Jones in a fight that many believed he deserved to win, Reyes believed he was already the uncrowned champion heading into his UFC 253 showdown with Jan Blachowicz. Whether that translated into overconfidence is unknown, but Reyes never pulled the trigger before falling by technical knockout to his Polish opponent in the second round of the Sept. 26 co-headlining bout. After beginning his career with 12 straight triumphs, “The Devastator” must pick up the pieces following back-to-back defeats. A proposed matchup against former Rizin champ Jiri Prochazka originally slated for Feb. 27 was postponed until May 1 due to an undisclosed injury suffered by Reyes.

After injuring his knee in a near-miss against Jon Jones, Santos returned to action for the first time in 16 months against Glover Teixeira in the UFC on ESPN 17 headliner. While “Marreta” was dangerous as ever on the feet, he looked lost on the canvas against his veteran foe and ultimately submitted to a rear-naked choke 1:49 into the third round. Though Santos owns a TKO win over current light heavyweight king Jan Blachowicz, back-to-back losses have dimmed his hopes at getting another title shot anytime soon. The Brazilian knockout artist will look to get back on track when he faces Aleksandar Rakic on March 6.

A step up in competition was no problem at all for Prochazka, who wowed in his Octagon debut with a second-round knockout of former light heavyweight title challenger Volkan Oezdemir at UFC 251. The former Rizin Fighting Federation champion has won his last 11 professional bouts, with all but one ending inside the distance. A proposed clash with former title challenger Dominick Reyes on Feb. 27 was postponed when Reyes suffered an undisclosed injury. The bout has been rescheduled for May 1.

Nemkov brought Bellator’s light heavyweight division into a new era in emphatic fashion, as he claimed the title with a second-round head-kick knockout of Ryan Bader in the Bellator 244 headliner on Aug. 21. The 28-year-old Russian has a legitimate claim to being one of the sport’s most underrated 205-pound talents with a resume that includes victories over the likes of Bader, Rafael Carvalho, Phil Davis, Liam McGeary and Philipe Lins. The reigning champ will enter the Bellator light heavyweight grand prix with a quarterfinal matchup against Phil Davis at Bellator 257 on April 16.

Oezdemir welcomed Jiri Prochazka to the Octagon at UFC 251, but it was the former Rizin light heavyweight champion who made the statement, winning via knockout 49 seconds into Round 2 of their clash on July 11. That halted a modest two-bout winning streak for Oezdemir, who was coming off quality wins over Aleksandar Rakic and Ilir Latifi. Oezdemir was supposed to square off against Nikita Krylov in the UFC Fight Night 180 co-main event before a knee injury forced him to withdraw from the bout.

It wasn’t the most entertaining performance, but Rakic was nonetheless dominant in sweeping the judges scorecards against Anthony Smith in a three-round headliner at UFC Fight Night 175 on Aug. 29. The 28-year-old Austria resident has won five of six in the Las Vegas-based promotion – his only setback was a narrow split decision loss to Volkan Oezdemir – and is already eyeing his place at the table in the 205-pound title discussion. “Rocket” will likely have to add a little more excitement to his next appearance to gain momentum with UFC brass, however. He’ll get that chance when he locks horns with former title challenger Thiago Santos on March 6.