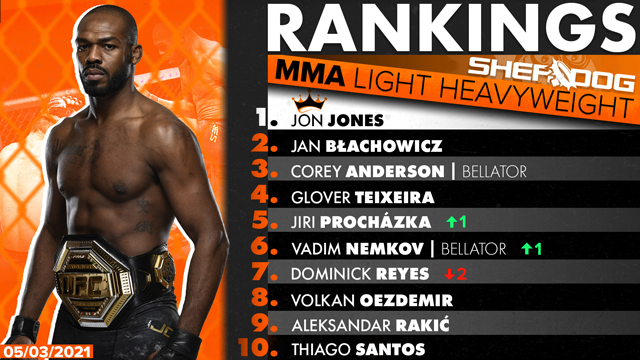 The competition is catching up to Jones, but it hasn’t surpassed him just yet. “Bones” survived by the skin of his teeth at UFC 247, as he edged Dominick Reyes in a unanimous verdict in the evening’s headliner at the Toyota Center in Houston. In a fight that many observers scored in favor of Reyes, Jones was able to sway the judges’ scorecards with consistent forward pressure and a strong push in the championship rounds. The hard-fought triumph gives Jones 14 victories in championship fights, the most in the history of the Las Vegas-based promotion. After some public back-and-forth with the UFC and Dana White, Jones vacated his light heavyweight strap in August, signaling a new era for the division. A move to heavyweight looms, though negotiations for that transition remain tense. Due to his long stretch of inactivity, Jones’ ranking eligibility will expire on Aug. 8.

Anderson relied on his bread-and-butter to dispatch Dovletdzhan Yagshimuradov at Bellator 257, as he ended his opponent’s eight-fight winning streak with punches and elbows from mount in the third round of their light heavyweight grand prix quarterfinal. Anderson, who has won six of his last seven outings, advances to the semifinals, where he will square off against fellow UFC veteran Ryan Bader.

Even at 41 years old, Teixeira keeps finding ways to win. The veteran Brazilian managed to avoid prolonged standup exchanges with Thiago Santos in the UFC on ESPN 17 main event en route to a third-round submission victory. That makes five straight victories for the rejuvenated Teixeira, who is positioned to earn his second light heavyweight title shot more than six years after falling to Jon Jones at UFC 172.

After a wild back-and-forth slugfest, Prochazka secured his 12th consecutive triumph with a highlight-reel spinning back elbow KO of Dominick Reyes in the UFC on ESPN 23 headliner at the UFC Apex in Las Vegas on May 1. Perhaps just as impressive as Prochazka’s offensive arsenal is the fact that his chin was able to hold up after absorbing some heavy artillery from Reyes. With stoppages of a pair of former title challengers in his first two Octagon appearances, the ex-Rizin champion likely awaits the winner of the Jan Blachowicz-Glover Teixeira showdown set for Sept. 4.

Nemkov retained his title and advanced in the light heavyweight grand prix at Bellator 257, where outpointed Phil Davis over five rounds at Mohegan Sun Arena in Uncasville, Connecticut on April 16. In addition to improving to 2-0 vs. “Mr. Wonderful,” the 28-year-old Fedor Emelianenko protégé has won his last eight fights overall. He’ll await the Yoel Romero-Anthony Johnson winner in the 205-pound semifinals.

Reyes was plenty game against Jiri Prochazka in the UFC on ESPN 23 main event, but he simply couldn’t go blow-for-blow with his Czech opponent, and the end result was knockout loss 4:29 into the second round of their May 1 bout. The Californian’s future seemed bright following a contentious decision loss to then 205-pound champ Jon Jones at UFC 247, but back-to-back KO defeats at the hands of Prochazka and Jan Blachowicz have changed that outlook for the time being.

Oezdemir welcomed Jiri Prochazka to the Octagon at UFC 251, but it was the former Rizin light heavyweight champion who made the statement, winning via knockout 49 seconds into Round 2 of their clash on July 11. That halted a modest two-bout winning streak for Oezdemir, who was coming off quality wins over Aleksandar Rakic and Ilir Latifi. Oezdemir was supposed to square off against Nikita Krylov in the UFC Fight Night 180 co-main event before a knee injury forced him to withdraw from the bout.

Rakic didn’t take any chances at UFC 259, but he did do just enough to capture a unanimous verdict over former title challenger Thiago Santos. “Rocket” has rebounded from a contentious split-decision defeat against Volkan Oezdemir with back-to-back wins over Santos and Anthony Smith. Rakic, who has been victorious in six of seven Octagon appearances overall, will likely need to author a more entertaining performance to move into the top tier of 205-pound contenders.

Santos suffered his third consecutive defeat at UFC 259, as he dropped a tepid three-round verdict against Aleksandar Rakic at the UFC Apex in Las Vegas on March 6. The Brazilian seems far removed from a competitive split-decision loss to then-champ Jon Jones at UFC 239, and moving forward it’s going to be an ongoing question how much the 37-year-old will be affected by the multiple knee surgeries he had to undergo after that bout. “Marreta” will attempt to rebound when he faces Johnny Walker on Oct. 2.