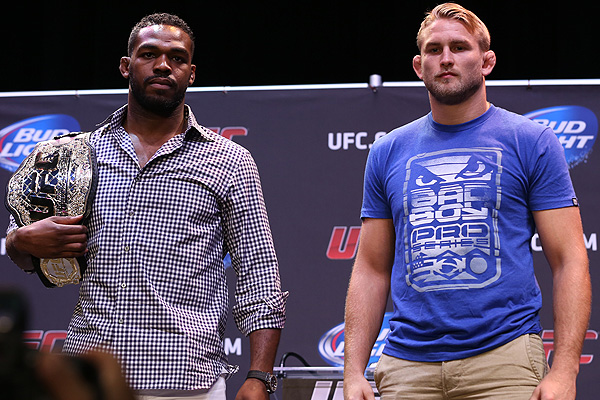 
Not long after Jones dismantled “The Ultimate Fighter 17” coaching rival Chael Sonnen at UFC 159, the young champion mentioned he would like to face Alexander Gustafsson upon his return to the Octagon. “Bones” will get his wish on Sept. 21, when he squares off with Gustafsson -- the opponent some claim most closely resembles Jones -- at UFC 165 in Toronto.


Evans took care of business in the UFC 161 headliner, as he claimed a split decision over Dan Henderson in Winnipeg, Manitoba, Canada. The victory halted the first two-fight losing streak of Evans' career and put the former champion in position for another meaningful bout near the top of the light heavyweight division. That fight will not be against Blackzilians teammate Vitor Belfort, a man Evans recently declined to face.


Once regarded as one of the light heavyweight division’s most promising talents, Davis’ career path took a detour following a lopsided loss to Rashad Evans at UFC on Fox 2. “Mr. Wonderful” got back on track at UFC 163, taking a controversial unanimous decision against former 205-pound kingpin Lyoto Machida. While many were not pleased with the ruling, Davis figures to be in line to face another contender upon his return to the Octagon.


During his UFC tenure, Machida has been involved in his share of contentious verdicts. “The Dragon” was on the wrong side of one of those decisions at UFC 163, falling to Alliance MMA product Phil Davis. Machida countered Davis effectively throughout the contest and, for the most part, thwarted the takedowns of the former NCAA All-American wrestler. After edging Dan Henderson in a similarly narrow encounter at UFC 157, Machida’s title hopes were dealt a serious blow when the cageside judges ruled unanimously in favor of “Mr. Wonderful.”


After back-to-back split decision losses to Lyoto Machida and Rashad Evans, Henderson's hopes of again challenging for UFC gold may have been put permanently on hold. The two-time Olympian had Evans reeling in the first round of their UFC 161 clash, but he failed to capitalize and wound up on the wrong side on the scorecards.


Gustafsson has not competed since December, when he took a clear-cut unanimous decision over Mauricio Rua at UFC on Fox 5. Despite missing an April engagement against Gegard Mousasi due to a cut suffered in training, the Swede will challenge Jon Jones for light heavyweight gold in his next appearance at UFC 165.


Nogueira was set to face Mauricio Rua at UFC 161 in a rematch of a memorable 2005 Pride Fighting Championships clash between the two light heavyweights. A herniated disc forced “Minotoro” out of that matchup, and the Brazilian’s next move is currently unclear.


When Antonio Rogerio Nogueira pulled out of the UFC 161 co-main event against Rua, it initially looked as though Chael Sonnen would be able to step in on short notice to face “Shogun.” However, visa troubles blocked Sonnen’s path to Canada, so now Rua and the two-time middleweight title contender will headline the UFC’s debut on Fox Sports 1 on Aug. 17.


Teixeira picked up a quick win and a $50,000 “Submission of the Night” check by submitting James Te Huna with a guillotine midway through the first round of their UFC 160 encounter. The Brazilian is now unbeaten in his last 19 fights, including four strong victories in his first 12 months with the UFC. Teixeira’s next test will come at UFC Fight Night 28 in Brazil on Sept. 4, when he faces former Arizona State University wrestling standout Ryan Bader.


Bader needed just 50 seconds to dispatch veteran Vladimir Matyushenko with a guillotine choke on Jan. 26, marking the first time the Belarusian had ever been submitted. An injury forced the Power MMA Team product out of a proposed matchup with Glover Teixeira at UFC 160. Instead, Bader will face the highly-touted Brazilian at UFC Fight Night 28 in Brazil in September.