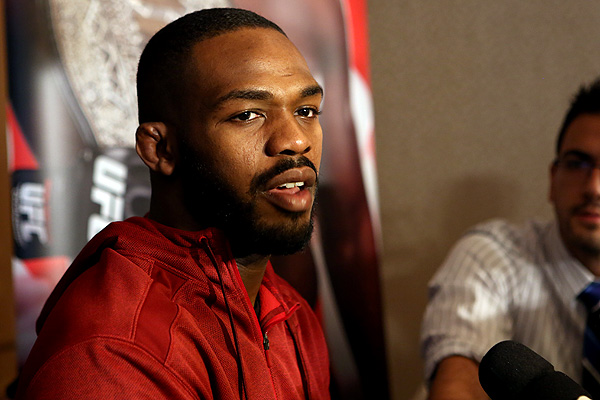 When 2013 “Fight of the Year” foil Alexander Gustafsson tore his meniscus, the MMA world was still promised an electric fight between “Jonny Bones” and unbeaten two-time Olympian Daniel Cormier. While their press tour got started with a bang -- including their now-infamous press conference shoving match and off-air ESPN flame war -- the hype quickly fizzled out amidst the worst of circumstances: Jones tore his meniscus and injured his ankle while sparring with Alistair Overeem. The much-anticipated Jones-Cormier fight is now tentatively penciled in for UFC 182 on Jan. 3.

Gustafsson was set to have his chance at revenge on Jon Jones after nearly taking the UFC light heavyweight title from him in Toronto in the “Fight of the Year” for 2013. However, a torn meniscus forced “The Mauler” out of the bout and put him on the shelf. With Jones now dialed into a new feud with Daniel Cormier, Gustafsson waits on the sideline.

It had been more than two years between stoppage wins for Evans, but he fixed that with a first-round finish at UFC 167. The former champion blew the doors off of fellow Fox Sports analyst Chael Sonnen, smashing the loud-mouthed Oregonian with ground punches and keeping Evans’ name in the discussion as one of the division’s elite. “Suga” was expected to welcome Daniel Cormier to the 205-pound division at UFC 170, but a knee injury will likely keep the Blackzilians member on the shelf until early 2015.

Luck was on Cormier’s side when Alexander Gustafsson suffered a torn meniscus, thrusting "DC" into a light heavyweight title bout with Jon Jones. However, after a heated and well-publicized start to their fight promotion, Jones suffered a torn meniscus of his own in addition to an ankle injury. Fortunately for Cormier, he will still retain his challenger status and figures to meet Jones for the 205-pound mantle at UFC 182 on Jan. 3.

When Jon Jones handed Teixeira a one-sided decision loss at UFC 172, it was the Brazilian’s first defeat in over nine years. Another streak of that magnitude might be far-fetched, but Teixeira’s chance to re-enter 205-pound contention starts back in his native Brazil, where he is scheduled to face former Penn State Nittany Lion Phil Davis at UFC 179 on Oct. 25 in Rio de Janeiro.

Johnson was a heavy favorite going into his July 26 bout with Antonio Rogerio Nogueira, but few expected the walloping that “Rumble” put on his veteran opponent. The Blackzilians representative used vicious uppercuts to deal Nogueira a 44-second knockout and propel himself to contender status. On Sept. 19, Johnson was placed on indefinite suspension by the UFC after a report surfaced that the fighter threatened and abused the mother of two of his children.

Henderson was finished for just the fifth time in his professional career at UFC 173, as he succumbed to a rear-naked choke in the third round against American Kickboxing Academy standout Daniel Cormier. “Hendo” had no answers for the powerful wrestling game of Cormier, who ragdolled his undersized foe for most of the bout. Henderson turned 44 in August.

At UFC 172, Davis was soundly shut out against Anthony Johnson over 15 lopsided minutes. Now, the road to redemption for “Mr. Wonderful” will run through Rio de Janeiro, as the former NCAA Division I wrestling champion will take on former UFC light heayvweight title challenger Glover Teixeira at UFC 179 on Oct. 25. Davis is 2-0 in Brazil, having previously taken wins over Wagner Prado and Lyoto Machida in the South American MMA cradle.

Takedowns and clinch work were once again the weapons of choice for the former NCAA All-American wrestler, who made a quick turnaround from his June win over Rafael Cavalcante to meet Ovince St. Preux on Aug. 16 in Maine. In capturing a unanimous decision against “OSP,” Bader picked up his third straight win and proved himself capable of going five full rounds.

“The Hardcore Kid” did it again on Sept. 12, defending his Bellator 205-pound title against journeyman Joey Beltran with another spectacular spinning backfist knockout. Currently riding a six-fight winning streak, Newton may face his toughest challenge yet in his next defense: a literal tall task in the form of the unbeaten 6-foot-6 Liam McGeary.