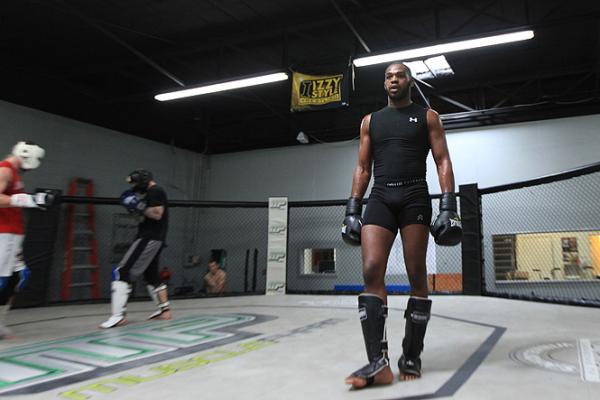 Jones was stripped of the UFC light heavyweight belt and suspended indefinitely following his April arrest on a felony hit-and-run charge, but “Bones” remains unparalleled in the 205-pound division. The 28-year-old’s reign included a record eight title defenses and a level of dominance over top competition rarely seen in any weight class, including a decisive victory against the man who now holds his belt, Daniel Cormier.

Five months after coming up short in a bid for Jon Jones’ title, Cormier at UFC 187 claimed the belt that was stripped from the former champ. The 36-year-old wrestler weathered some heavy punches and kicks to ground, exhaust and choke out Anthony Johnson in the third round of their May 23 encounter. After the win, Cormier immediately called out the suspended Jones, the only fighter who has topped the American Kickboxing Academy standout in 17 bouts. Cormier’s first challenger will be Alexander Gustafsson in the main event of October’s UFC 192.

Johnson came out swinging and nearly took off Daniel Cormier’s head in the opening round of their bout for the vacant UFC light heavyweight title on May 23, but it was not to be. Cormier recovered from the early thunder of “Rumble” and repeatedly took Johnson to the canvas, wearing out the Blackzilians fighter with ground-and-pound before securing a third-round rear-naked choke. The defeat snapped a nine-fight winning streak for Johnson, who had not lost since January 2012. The 31-year-old will look to get back on track at UFC 191 on Sept. 5, when he faces Jimi Manuwa in Las Vegas.

Gustafsson was one win away from his desired rematch with Jon Jones -- and then he ran into Anthony Johnson. “The Mauler” became the mauled before a hometown crowd in Stockholm on Jan. 24, as Gustafsson fell victim to Johnson’s heavy hands and succumbed to first-round punches in the main event of UFC on Fox 14. After winning seven of his first eight Octagon appearances, Gustafsson has now dropped two of his last three, prompting the Swede to tell reporters that he needs to “get back and work harder” if he wanted to vie for the title again. He will have that chance on Oct. 3, when Gustafsson is set to challenge new champ Daniel Cormier at UFC 192.

While it was hardly a crowd-pleasing performance, Bader picked up his fourth straight win Jan. 24 in Stockholm, this time edging fellow wrestler Phil Davis in a split decision. All four of the former “Ultimate Fighter” winner’s recent victories have been awarded by the judges, including a five-round grinder against Ovince St. Preux in August. After seeing his June 6 bout with Daniel Cormier fall apart, Bader is now angling for a shot at the newly crowned champion, though he will have to wait for Cormier to fight Alexander Gustafsson. The 32-year-old will welcome Rashad Evans back to the cage at UFC 192 on Oct. 3.

Davis narrowly outstruck Ryan Bader in their Jan. 24 meeting, but it was not enough to sway the judges. “Mr. Wonderful” dropped a split decision to Bader in the lackluster three-rounder, marking Davis’ second loss in three appearances -- the first such stretch of his MMA career. Still, the former Penn State Nittany Lion holds significant victories at 205 pounds, like his decisions over Lyoto Machida and Glover Teixeira. Davis recently agreed to a multi-fight deal with the Bellator MMA organization and will make his promotional debut on Sept. 19.

“OSP” used strong counter-wrestling to shut down the grapple-minded Patrick Cummins and set up a big first-round knockout on April 18. The win comes on the heels of St. Preux’s November drubbing of Brazilian star Mauricio “Shogun” Rua. The former Tennessee Volunteer has lost only one of his seven UFC appearances and has finished four of his Octagon wins in the opening round. He will take on Glover Teixeira at a UFC Fight Night event on Aug. 8.

Teixeira struggled to find his range and to stay upright against Phil Davis at UFC 179, succumbing to multiple takedowns and chippy range striking from the former NCAA Division I wrestling champion over the course of a three-round decision loss. After racking up 20 straight wins between 2006 and 2013, Teixeira has now suffered back-to-back defeats for the first time in his career. The Marco Ruas student was slated to face Alexander Gustafsson in June, but Gustafsson came up injured and withdrew from the bout. Teixeira will instead lock horns with the surging Ovince St. Preux at a UFC Fight Night event on Aug. 8.

McGeary became the first Englishman to wear Bellator MMA gold when he dethroned Emanuel Newton in a tight, five-round decision on Feb. 27. The unbeaten submission specialist moved to 10-0 by keeping Newton in constant danger on the ground with triangle chokes and armbars. The bout was the first of McGeary’s seven Bellator appearances which he did not finish in the opening round. The 32-year-old will defend his title against Tito Ortiz on Sept. 19.

When Newton fell behind early in his October title defense against Linton Vassell, “The Hardcore Kid” managed to mount a gritty comeback and secure a fifth-round finish. He could not repeat the feat on Feb. 27, when Liam McGeary repeatedly threatened Newton with submissions en route to snatching the Bellator 205-pound strap in a narrow decision. Newton tested positive for marijuana following the loss and received a three-month suspension. He will return to the cage on Sept. 19 as part of Bellator’s one-night light heavyweight tournament.