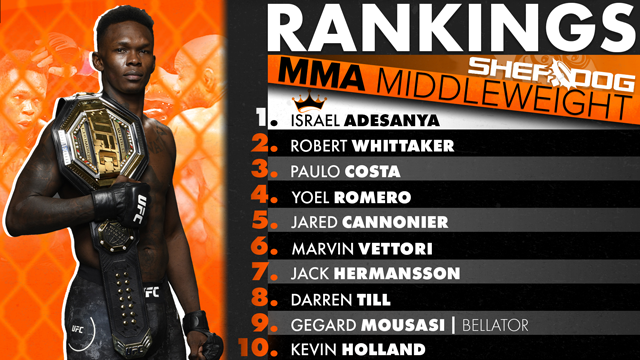 If a lackluster showing against Yoel Romero at UFC 248 took some of the shine off Adesanya’s star, the City Kickboxing product restored all that was lost and then some with a dominant showing against the previously undefeated Paulo Costa at UFC 253. “The Last Stylebender” was rarely threatened as he befuddled his powerfully built opponent with crisp striking and precise movement, winning by technical knockout in the second stanza of their headlining encounter on Yas Island in Abu Dhabi on Sept. 26. Rather than a rematch with Robert Whittaker, Adesanya will turn his attention to two-division dominance with a showdown against reigning 205-pound king Jan Blachowicz at some point in 2021.

Whittaker proved he wasn’t ready to relinquish his No. 1 contender spot at UFC 254, as he earned a hard-fought victory over Jared Cannonier at the Flash Forum in Abu Dhabi on Oct. 24. In approximately three months’ time, “The Reaper” has emerged victorious over eight rounds against dangerous contenders in Cannonier and Darren Till. Even though Whittaker has a second-round KO loss to Israel Adesanya on his resume, it’s going to be hard to deny the New Zealand-born Aussie another shot at 185-pound gold in the near future.

When all was said and done, Costa may have thrown more taunts than strikes against Israel Adesanya in the UFC 253 main event. The end result was a baffling performance in which “Borrachinha” was completely outclassed en route to a second-round technical knockout debut in Abu Dhabi on Sept. 26. The good news is that the Brazilian is just 29 years old and should have plenty of time to work his way back to another title shot down the road.

Romero didn’t necessarily deserve a middleweight title shot at UFC 248, and he offered a confounding performance in a unanimous decision defeat against Israel Adesanya. Romero was then forced to withdraw from a UFC on ESPN 15 co-main event clash against Uriah Hall on Aug. 22. A little more than three months later, “The Soldier of God” was released by the UFC with three fights remaining on his contract, but Romero quickly found a new home with Bellator MMA, where he will compete at light heavyweight.

With the blessing of Israel Adesanya behind him, Cannonier had a chance to solidify himself as the middleweight division’s No. 1 contender at UFC 254. While “The Killa Gorilla” fought valiantly, he ultimately dropped a three-round verdict to ex-champ Robert Whittaker in the evening’s co-main event at the Flash Forum in Abu Dhabi on Oct. 24. That setback snaps a three-bout winning streak for the former heavyweight and light heavyweight competitor, who now has some more work to do to get in position for a 185-pound title shot.

Vettori earned his fourth consecutive triumph in the UFC on ESPN 19 main event, where defeated Jack Hermansson via unanimous decision at the UFC Apex in Las Vegas on Dec. 5. The Kings MMA product nearly finished his opponent in Round 1, but his ability to stay patient and outwork Hermansson for a full 25 minutes bodes well for his future contention prospects at 185 pounds. The new face of Italian MMA called out Paulo Costa in the immediate aftermath -- a fight that piqued Dana White’s interest – but he also has his sights set on a rematch with reigning champ Israel Adesanya, whom he lost a split decision against in April 2018.

First it was Darren Till, then Kevin Holland and finally – Marvin Vettori. Ultimately, the third opponent wasn’t the charm for Hermansson at UFC on ESPN 19, as he dropped a five-round verdict to “The Italian” Dream at the UFC Apex in Las Vegas on Dec. 5. After a four-bout winning streak put “The Joker” on the short list of middleweight contenders, Hermansson has come up short in two of his last three Octagon appearances.

Till certainly had his moments against Robert Whittaker at UFC on ESPN 14, but he ultimately lost a narrow five-round verdict to the former middleweight champion. Still, “The Gorilla” wasn’t discouraged by his effort against Whittaker and figures to be tough challenge for many opponents in the middleweight division. Till was supposed to receive another marquee match at 185 pounds against contender Jack Hermansson, but injury forced him to withdraw from the Dec. 5 UFC main event.

Mousasi claimed the vacant Bellator middleweight crown with a convincing if not quite memorable five-round verdict against 170-pound title holder Douglas Lima at Bellator 250 on Oct. 29. That victory allowed the Armenian-born Dutchman to reclaim the belt he lost to the now-retired Rafael Lovato Jr. via majority decision in June 2019. “The Dreamcatcher” has won 10 of 11 bouts since 2016, scoring wins over the likes of Lyoto Machida, Rory MacDonald, Chris Weidman, Uriah Hall and Thiago Santos during that time.

Holland concluded a 5-0 campaign in style at UFC 256, when he knocked out former Strikeforce champion Ronaldo Souza with strikes from the bottom position in the opening round of their clash at the UFC Apex in Las Vegas on Dec. 12. The Dana White’s Contender Series alum became a breakout star in 2020 thanks to a willingness to accept fights and an ability to win in emphatic fashion — see the three performance bonuses he earned — and after earning his most notable victory to date figures to be in line for a highly-ranked foe when he returns to action in 2020.