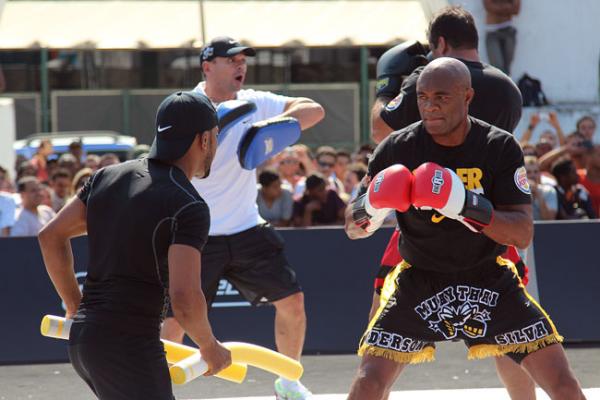 
The world’s best fighter coasted through 2012, dismantling Chael Sonnen in their July rematch before doing the same to Stephan Bonnar in a last-minute October affair. Things will get more serious on July 6, when “The Spider” will face one of the youngest and hungriest challengers of his UFC reign, unbeaten wrestler Chris Weidman, in the main event of UFC 162.


It has been, to borrow a phrase, a meteoric rise for Weidman inside the Octagon. Just two years and five bouts into his UFC career, the 9-0 New Yorker -- who underwent surgery for a torn labrum in late November -- has been granted the fight for which he was angling: a title shot against middleweight king Anderson Silva at UFC 162 in July.


Belfort might have locked up “Knockout of the Year” honors for 2013 at UFC on FX 8, where he blasted former Strikeforce 185-pound king Luke Rockhold with a spectacular spinning heel kick in the opening frame of their main-event matchup. While the Brazilian’s recent surge has been clouded by questions regarding his use of testosterone replacement therapy, dominant wins over Rockhold and Michael Bisping this year make it difficult to deny “The Phenom” another shot at middleweight gold.


Japan’s top MMA export scored a major win in front of a partisan crowd on March 3, stifling the dangerous striking of Hector Lombard with two rounds of top control at UFC on Fuel TV 8 in Saitama, Japan. Reportedly in the works is a matchup pitting Okami against another veteran of the Japanese MMA scene, Dream vet and former Strikeforce champion Ronaldo “Jacare” Souza.


After having his title hopes dashed by Vitor Belfort in January, “The Count” got right back on track with a victory over Alan Belcher at UFC 159. The bout came to an unfortunate and early end when Bisping caught Belcher with an eye poke in round three, but by then, the Brit had outworked “The Talent” enough to earn a unanimous technical decision and keep his name among the middleweight elite.


Munoz appeared to be on the brink of contention after four straight wins against Chris Leben, Demian Maia, C.B. Dollaway and Aaron Simpson. The title talk came to a screeching halt in July, when the former Oklahoma State University wrestler was dealt a bloody knockout at the hands of unbeaten up-and-comer Chris Weidman. Munoz will have a chance to right the ship against another fallen title hopeful, Tim Boetsch, on July 6 at UFC 162.


Rockhold met an abrupt and violent end in his Octagon debut, falling victim to a Vitor Belfort spinning heel kick in the UFC on FX 8 headliner. The loss ended a nine-fight winning streak for the American Kickboxing Academy representative, who had not tasted defeat since 2007.


After a September decision loss to perennial top 10 middleweight Michael Bisping, Stann moved up to 205 pounds for a headlining match against Wanderlei Silva at UFC on Fuel TV 8. While the U.S. Marine likely gained fans for his part in a frantic slugfest, it was Silva who ultimately landed the home run shot and handed Stann just the second knockout loss of his career.


Philippou formally announced his presence in the middleweight division with a TKO triumph over Tim Boetsch at UFC 155, his fifth consecutive victory in the promotion. However, the Serra-Longo Fight Team member withdrew from a showdown with Ronaldo Souza at UFC on FX 8, and his next move remains unknown.


Since losing his Strikeforce belt to Luke Rockhold, “Jacare” has been on a roll, finishing his next four opponents in dominant fashion. Most recently, Souza put on a grappling clinic against Chris Camozzi in his first UFC outing, submitting the Coloradan with an arm-triangle choke in the first round at UFC on FX 8. A showdown with former No. 1 contender Yushin Okami is rumored to be next for Souza.