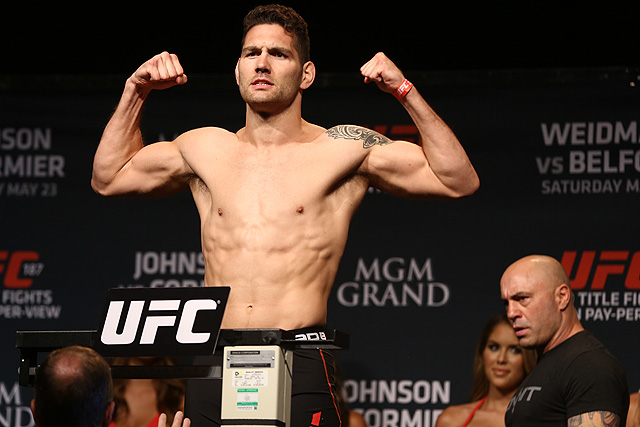 Kept away from the cage for nearly a year due to multiple injuries, Weidman finally made his long-delayed title defense against Vitor Belfort at UFC 187, and it was worth the wait. The 30-year-old New Yorker fought through an early onslaught from Belfort before taking “The Phenom” to the ground, passing to full mount and punching his way to a stoppage in under three minutes. It was Weidman’s third successful title defense, all of which have come against highly regarded Brazilians: Belfort, Lyoto Machida and Anderson Silva. “The All-American” will next put his belt on the line against countryman Luke Rockhold in the co-main event of UFC 194.

In one of his finest showings to date, Rockhold smashed and submitted dangerous former light heavyweight champ Lyoto Machida in the main event of a nationally televised UFC card on April 18. The decisive win -- Rockhold’s fourth in a row -- shone the spotlight on the American Kickboxing Academy standout and also eliminated a potential contender from the crowded race for the middleweight title. Rockhold will finally get his shot at UFC gold at UFC 194, where he is set to challenge Chris Weidman.

A win against Yoel Romero at UFC on Fox 15 might have propelled “Jacare” into the No. 1 contender’s spot for the UFC middleweight title. Unfortunately, Romero withdrew from the fight just one week out, leaving the Brazilian jiu-jitsu ace to submit unranked replacement Chris Camozzi on April 18, just as he had in May 2013. Nevertheless, Souza remains unbeaten in the Octagon at 5-0 and currently owns an eight-fight winning streak. The postponed clash with Romero awaits at UFC 194 on Dec. 12.

Cuba’s “Soldier of God” scored the biggest win of his career on June 27, knocking out former light heavyweight champ Lyoto Machida with a torrent of elbows on the ground. Since joining the UFC in April 2013, Romero has notched six consecutive victories, five of which have come by way of knockout. The American Top Team-trained contender will battle Ronaldo “Jacare” Souza at UFC 194 in December.

Belfort emerged victorious from his rubber match with Dan Henderson on Nov. 7, knocking out his fellow legend in the opening round with a head kick and follow-up punches. It was the fourth stoppage win for the Brazilian in his last five outings and his first since being blown up by Chris Weidman in their May title bout.

Machida sought to implement his distance striking against Yoel Romero on June 27 but was taken down and knocked out cold by the wrestler’s elbows in round three. The defeat marks Machida’s first back-to-back losses since 2010 and brings his record in the UFC middleweight division to 3-3.

The indefatigable Bisping used constant movement and technical striking to outpoint Thales Leites across five rounds on July 18 in the main event of UFC Fight Night in Glasgow, Scotland. The victory puts “The Count” on his first winning streak since 2011, as he had alternated wins and losses in his previous eight Octagon appearances. After the win, Bisping stated that he is seeking rematches with Vitor Belfort and Dan Henderson. Those two men have since been paired in a trilogy match. Meanwhile, an injury forced Bisping to withdraw from a fight opposite Robert Whittaker at UFC 193 on Nov. 15.

The reigning World Series of Fighting champion has made a name for himself as the best middleweight competing outside the Octagon, winning eight of nine since exiting the UFC in 2011. Branch punched out longtime 185-pound ranker Yushin Okami to defend his belt. On Sept. 18, the Renzo Gracie student scored a quick submission of Teddy Holder to capture the vacant WSOF light heavyweight title and become the company’s first two-division champ.

The new and improved Leites started his second UFC stint with a bang, using a combination of black-belt level Brazilian jiu-jitsu and sharpened striking to rack up five straight wins against likes of Tim Boetsch and Francis Carmont. The Brazilian’s hot streak ended in July, when he was outworked by Michael Bisping in a five-round decision loss.

Khalidov made his only fight of 2015 an impressive one, as the Polish star demolished countryman Michal Materla in just 31 seconds to take the Konfrontacja Sztuk Walki middleweight title. Though his numbers are astonishing -- one loss in 30-plus fights since 2005, including 11 straight wins -- Khalidov remains an outlier due to his sporadic schedule and inability to fight top-shelf competition.