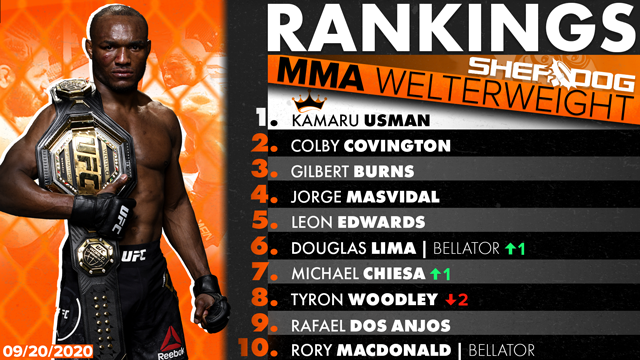 Usman continued to roll through the welterweight division at UFC 251, taking a dominant unanimous verdict over short-notice foe Jorge Masvidal in the evening’s headliner at Yas Island in Abu Dhabi. While “The Nigerian Nightmare” wasn’t especially exciting, he was undeniably effective in throttling his opponent through clinch work, pressure and takedowns. Usman has now won 12 consecutive fights at 170 pounds, tying him with Georges St. Pierre for the longest winning streak in the history of the division. Usman is expected to make his next title defense against Gilbert Burns at UFC 256 on Dec. 12.

Covington settled the score with Tyron Woodley in decisive fashion at UFC Fight Night 178, dominating his former American Top Team stablemate for the majority of the bout before a rib injury forced Woodley to cry uncle at the 1:19 mark of Round 5. “Chaos” appears to be back on track after coming up short in a 170-pound title bout against Kamaru Usman at UFC 245 in December and remains one of the top contenders in the division.

Burns nearly finished Tyron Woodley in the opening moments of the UFC on ESPN 9 main event, and he dominated their fight from there, winning a clear-cut unanimous decision at the UFC Apex in Las Vegas on May 30. That makes five straight welterweight triumphs for Burns, who has thrived since moving up from 155 pounds. “Durinho” was supposed to face Kamaru Usman for the welterweight crown at UFC 251, but a positive COVID-19 test forced Burns out of his golden opportunity. Burns will now get a chance to dethrone Usman at UFC 256 on Dec. 12.

After accepting a welterweight title fight on six days’ notice, Masvidal gave Kamaru Usman hell for a round at UFC 251 before fatigue and the champion’s oppressive wrestling took control. When the dust settled, “Gamebred” had dropped a unanimous decision to Usman that wasn’t particularly close. Next, Masvidal will run it back with Nate Diaz in a rematch for the “BMF” crown. A date for the bout hasn’t been locked down, but it is expected to take place sometime in 2021.

Edwards gave the most complete performance of his career at UFC on ESPN 4, earning convincing five-round verdict over former lightweight king Rafael dos Anjos in San Antonio on July 20. That makes eight consecutive victories for “Rocky,” the second longest active winning streak in the division behind only reigning champ Kamaru Usman. Edwards has positioned himself as one of the top contenders at 170 pounds, but the coronavirus pandemic nixed a clash with Tyron Woodley on March 21 in London.

It wasn’t the most thrilling performance, but Lima reclaimed the welterweight throne with a decision victory over Rory MacDonald in the grand prix finals at Bellator 232. In avenging a previous loss to “The Red King” at Bellator 192, Lima thwarted the takedown attempts of his opponent while picking him apart on the feet with crisp jabs and leg kicks. Now a three-time Bellator 170-pound king, Lima has won six of his last seven appearances within the California-based promotion. “The Phenom” will attempt to become a two-division champion when he locks horns with reigning 185-pound king Gegard Mousasi on Oct. 29.

Chiesa looks quite comfortable at welterweight, particularly when he looks significantly larger than his opponent as he did against Rafael dos Anjos at UFC Raleigh. The Sikjitsu product used his size and grappling to ground the former lightweight king for significant periods of time to capture a unanimous verdict in the evening’s co-main event. Since moving up from the lightweight division, Chiesa has earned convincing triumphs over Carlos Condit, Diego Sanchez and dos Anjos to establish himself as a person of interest at 170 pounds.

For the third consecutive bout, Woodley suffered a lopsided loss at the hands of one of the 170-pound division’s top contenders. This time, it was bitter rival Colby Covington who administered the beating, as he stopped Woodley via fifth-round TKO in the UFC Fight Night 178 headliner in Las Vegas on Sept. 19. The 38-year-old former champion has not been competitive in setbacks to Covington, Gilbert Burns and Kamaru Usman, prompting UFC president Dana White to urge “The Chosen One” to consider retirement.

Dos Anjos lost for the fourth time in his last five Octagon outings at UFC Fight Night 166, dropping a unanimous verdict to Michael Chiesa in the evening’s co-main event in Raleigh, N.C. While the Brazilian did have some success on the feet, he was unable to keep the contest upright long enough to impose his will. Instead, it was Chiesa who controlled the fight on the mat through his superior size and grappling. Dos Anjos will return to lightweight for a showdown with Islam Makhachev at UFC 254.

The entirety of the Bellator welterweight grand prix was a slog for MacDonald, and it finally caught up to him in the tournament finals, where he dropped a unanimous verdict — and the 170-pound belt — to Douglas Lima. Unlike his first meeting with Lima, the Tristar Gym representative was unable to impose his will through takedowns at Bellator 232, and as a result, “The Phenom” gradually picked him apart with quick left hands and hard leg kicks. When MacDonald finally did briefly ground his opponent, Lima was able to quickly reversed the position to put his final stamp on the fight. “The Red King” will not have a trilogy with Lima anytime soon, as he has departed for the Professional Fighters League with an eye on competing for the promotion’s $1 million payout at 170 pounds.