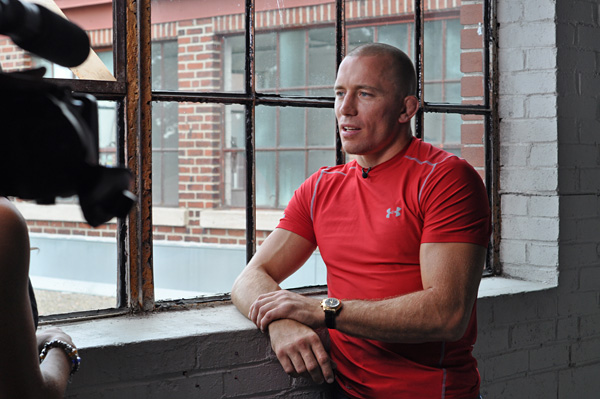 
After his triumphant Nov. 17 return against Carlos Condit, many quickly speculated if GSP would next be occupied by defending his title against Johny Hendricks, or if he would meet Anderson Silva in their much-ballyhooed superfight. The answer? Neither. St. Pierre will settle his beef with former would-be challenger Nick Diaz on March 16 in Montreal.


A soft touch for the recently bloodied title challenger? A quick-and-dirty tune-up fight? No way. “The Natural Born Killer” is right back to work just weeks after his bout against St. Pierre. Condit is set to rematch fast-rising welterweight prospect Rory MacDonald, who he stopped in the third round of their entertaining June 2010 bout.


Following his Nov. 17 decimation of Martin Kampmann, Johny Hendricks seemed like the most likely next challenger for the UFC welterweight title. However, whether owing more to business financials or the whims of the UFC and Georges St. Pierre, “The Bigg Rigg” will need to bide his time against tough top-10 entrant Jake Ellenberger at UFC 158 in March, while GSP defends his crown against Nick Diaz.


He hasn’t fought in nearly a year and lost his last bout. However, the beef between Nick Diaz and Georges St. Pierre -- as well as the investment in their previously scheduled bout -- has led the UFC to give Diaz his second straight crack at 170-pound gold come UFC 158 in March.


Jon Fitch seldom gets any favors in the matchmaking department, and his next outing is no different. After persevering in thrilling fashion against prospect Erick Silva in October, Fitch is back against another Brazilian on Feb. 2, taking on former middleweight title challenger Demian Maia at UFC 156.


It looked like Jake Ellenberger’s welterweight title dreams might have gone up in flames when he was knocked out by Martin Kampmann in June. He has since earned a unanimous verdict on Jay Hieron, putting him in position for a much larger, important bout with Johny Hendricks at UFC 158 on March 16.


On the road to recovery from a bulging disc in his back that forced him out of a bout with Jake Ellenberger, Koscheck is eying a return to the Octagon in early 2013. In a recent post on his Twitter account, “The Ultimate Fighter” Season 1 alumnus mentioned Nick Diaz, Demian Maia, Ellenberger and Rory MacDonald as the opponents he would most like to face.


In between making fun of 170-pound compatriot Rory MacDonald’s dress code and harassing Dana White on Twitter, Bellator’s bushy-haired champ has signed on to defend his title against Season 6 welterweight winner Karl Amoussou. The Olympian Askren will also subscribe to Voluntary Anti-Doping Association testing for his second Bellator title defense.


In the biggest fight of his young career, Rory MacDonald destroyed faded icon B.J. Penn over 15 one-sided minutes at the UFC on Fox 5. After a dominant display, MacDonald called out former tormentor Carlos Condit, who bested him in June 2010. The young Canadian will get the chance to avenge his lone career loss March 16 at UFC 158 in Montreal.

With the entry of Rory MacDonald, previously 10th-ranked Nate Marquardt falls to the contenders list.