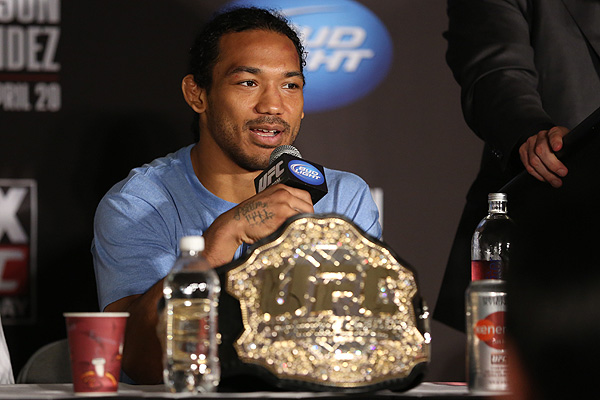 
After a dominant victory over Nate Diaz in December, “Smooth” returned to his habit of winning closely contested decisions at UFC on Fox 7. Paired with former Strikeforce titlist Gilbert Melendez, Henderson outstruck his foe just enough to earn a razor-thin split verdict. There will be no immediate rematch for “El Nino,” however, as Henderson will next defend his crown against the Gray Maynard-T.J. Grant winner.


At UFC on Fox 7, Melendez proved he belonged among the division’s elite by giving reigning UFC 155-pound champion Benson Henderson all he could handle in the headliner. It was not enough to get the nod from two of the three cageside judges, however, as the Skrap Pack member’s pace slowed slightly down the stretch en route to losing a controversial split decision. The narrow nature of the defeat means that “El Nino” will not be too far removed from title consideration.


It was a quiet second half of 2012 for Maynard, as a knee injury forced “The Bully” out of a proposed bout with Joe Lauzon at UFC 155. Maynard can stake his claim to the division’s No. 1 contender spot if he defeats the red-hot T.J. Grant at UFC 160 on May 26.


Following a vicious liver-kick knockout of Donald Cerrone on Jan. 26, Pettis decided to take matters into his own hands. Rather than wait for the victor of the April 20 bout between Benson Henderson and Gilbert Melendez, “Showtime” elected to try his hand at 145 pounds. He will get a title shot against Jose Aldo in his first featherweight appearance on Aug. 3.


Chandler continues to justify every bit of the significant hype surrounding him. While the Bellator title around his waist means significantly more time between bouts than when he first entered the promotion in 2010, the former University of Missouri Tiger is making each fight count. On Jan. 17, Chandler handed judo Olympian Rick Hawn the second defeat of his career via second-round rear-naked choke. Next up, he will face resurgent World Extreme Cagefighting alum Dave Jansen.


When fully healthy, “The Punk” remains a formidable opponent for anyone in the lightweight division, as he proved by becoming the first person to stop the durable Nate Diaz with strikes at UFC on Fox 7. With one resounding victory under his belt, the former Strikeforce titlist figures to receive another contender for his next Octagon appearance.


Diaz’s second consecutive defeat at lightweight came in devastating fashion. The Stockton, Calif., native fell victim to a vicious head kick and follow-up punches from Strikeforce veteran Josh Thomson at UFC on Fox 7, prompting Diaz’s corner to throw in the towel just as the bout was halted. With another title shot out of reach for now, the Cesar Gracie pupil has hinted at a return to 170 pounds.


Healy made his long-awaited return to the Octagon count, putting divisional stalwart Jim Miller to sleep with a third-round rear-naked choke in UFC 159’s “Fight of the Night.” The victory brought the Strikeforce import’s current winning streak to nine in a row and announced Healy as a serious threat in the UFC lightweight division.


Miller was submitted for just the second time in his career -- choked unconscious, actually, since he refused to tap -- by gritty Strikeforce import Pat Healy in their exciting April 27 encounter. The New Jersey native is now 2-3 in his last five, though all those matchups have been against the cream of the 155-pound crop.


Cerrone was stopped by strikes for the first time in his MMA career by Anthony Pettis at UFC on Fox 6. The WEC veteran will attempt to rebound from that devastating defeat when he squares off with skilled boxer and former EliteXC champion K.J. Noons at UFC 160.