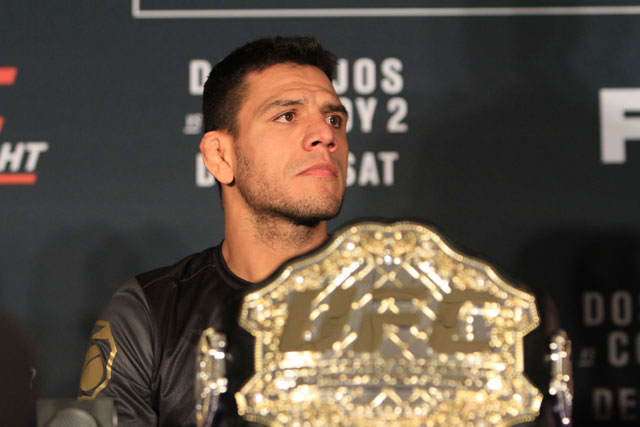 Dos Anjos’ first UFC title defense could hardly have gone better, as the Brazilian ace tore through Donald Cerrone in 66 seconds to end 2015 with gold around his waist. The Kings MMA product has lost just once in his last 11 outings -- an April 2014 decision defeat against Khabib Nurmagomedov -- and while dos Anjos would surely like to avenge that loss, the champ has also expressed an interest in fighting new featherweight king Conor McGregor.

The main event of UFC 185 saw Pettis dominated like never before. The former UFC and World Extreme Cagefighting titleholder lost his belt to Rafael dos Anjos after 25 lopsided minutes in which “Showtime” was forced to fight off his back and never truly looked competitive. The defeat was Pettis’ first since his 2011 Octagon debut, where he was similarly ground out by Clay Guida. The Roufusport fighter has been paired opposite form Bellator champion Eddie Alvarez at a UFC Fight Night event on Jan. 17.

Cerrone may be one of the most exciting fighters in the lightweight division, but “Cowboy” continues to stumble when it matters most. His bid to take the UFC title from Rafael dos Anjos lasted only 66 seconds, as Cerrone wilted under an early onslaught from the champion. The loss snapped an eight-fight, two-year unbeaten streak during which Cerrone bested the likes of Benson Henderson, Eddie Alvarez and Edson Barboza.

Alvarez’s trademark grit was on full display at UFC 188, where the former Bellator champ spent rounds two and three of his bout with Gilbert Melendez fighting with his left eye almost completely swollen shut. Alvarez came on strong in the latter frames to earn a split decision, a significant victory to help ease the sting of his disappointing Octagon debut against Donald Cerrone. He will return to the cage against former UFC champion Anthony Pettis on Jan. 17.

Over the course of two years and seven straight victories, Ferguson has become one of the hottest commodities in the UFC’s famously deep lightweight division. The former “Ultimate Fighter” winner’s latest conquest came at “The Ultimate Fighter 22” Finale, where he tapped Edson Barboza with a second-round brabo choke in the show’s thrilling “Fight of the Night.”

Brooks maintained his spot atop the Bellator MMA lightweight division by defending his title with a five-round unanimous decision over Polish submission wiz Marcin Held on Nov. 6. The 28-year-old American Top Team fighter’s record includes wins over veteran names like John Alessio and Satoru Kitaoka, as well as a pair of victories against ex-titlist Michael Chandler.

Dariush got his fifth win in 12 months when he nabbed a close and controversial split decision from Michael Johnson on Aug. 8 in Nashville. Though his takedowns were stuffed throughout the 15-minute affair, the Kings MMA product kept busy with leg kicks and came on strong in the final frame to earn the nod from two of the three judges. Dariush’s current hot streak also includes victories against Jim Miller and Daron Cruickshank.

Iaquinta snatched a highly controversial split decision from Jorge Masvidal in their April encounter, but his previous three wins -- technical knockouts of Joe Lauzon, Ross Pearson and Rodrigo Damm -- were unquestionable. The New Yorker was slated to compete on July 15 in San Diego, but an injury to Bobby Green and a failed drug test from Gilbert Melendez left Iaquinta without an opponent. Iaquinta has since undergone knee surgery and will be out of commission until the middle of 2016.

Barboza fought tooth-and-nail with Tony Ferguson for nearly eight minutes before succumbing to a second-round brabo choke from “El Cucuy.” The setback leaves Barboza with a 1-2 record in 2015, with a decision win over Paul Felder sandwiched between losses to Ferguson and Michael Johnson.

Dunham had a few rough years in the UFC lightweight division but resurfaced in 2015 with a trio of solid victories. The all-action Oregonian this year earned decision wins over Ross Pearson, Rodrigo Damm and, most recently, Joe Lauzon.