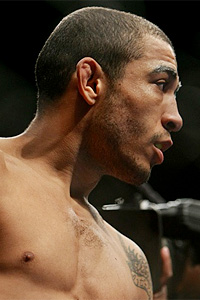 1. Jose Aldo (18-1)
Aldo was set to make his UFC debut by defending his featherweight crown against Josh Grispi at UFC 125 on Jan. 1. However, an ongoing back injury forced him out of the fight and into treatment. The return for the 145-pound kingpin should come in the second quarter of 2011.

2. Manny Gamburyan (11-5)
With his corking of former WEC champion Mike Thomas Brown in April, Gamburyan earned his shot at Jose Aldo. However, when the two met at WEC 51 on Sept. 30, the tough Armenian had very little for Aldo, who leisurely strolled through the first round before turning up the heat and halting Gamburyan in the second, seemingly at will.

3. Mike Thomas Brown (24-6)
In April 2004, a lightweight Brown tapped out to Japanese vet Genki Sudo in the first round. Nearly seven years later, Brown will return to the Octagon as a featherweight to tangle with once-beaten Brazilian Diego Nunes at UFC 125 on Jan. 1.

4. Michihiro Omigawa (12-8-1)
Omigawa is set for a stateside return, having parlayed his successful career rehabilitation at 145 pounds into another run in the UFC. His return bout is a tough one, however, as he will meet unbeaten prospect Chad Mendes at UFC 128 on March 19 in Newark, N.J.

5. Marlon Sandro (17-1)
Sandro’s marquee fight is on the horizon. Sengoku Raiden Championship’s featherweight titleholder will defend his crown on Dec. 3 at Sengoku “Soul of Fight” against Hatsu Hioki. Though it was signed for five five-minute rounds, the bout might not need those 25 minutes, given the dynamic skills of both fighters.

6. Bibiano Fernandes (8-2)
In the final of the 2009 Dream featherweight grand prix, Fernandes hung tough through a late salvo from Hiroyuki Takaya, taking a split decision and the title. At “Dynamite: Power of Courage 2010” on New Year’s Eve, he will defend his crown for the second time in a rematch with the “Streetfight Bancho.”

7. Hatsu Hioki (22-4-2)
Hioki was the favorite in Sengoku’s initial featherweight grand prix in 2009. After defeated Masanori Kanehara in the semi-finals, he was unable to continue into the final due to a concussion. Now, he will have the chance to finally earn the title when he takes on champion Marlon Sandro at “Soul of Fight” on Dec. 30.

8. Josh Grispi (14-1)
Grispi was set to challenge for the UFC featherweight title against Jose Aldo at UFC 125 on Jan. 1, before a back injury forced the Brazilian to withdraw. Now, the 22-year-old Grispi enters into a very dangerous fight against another young prodigy, 21-year-old Dustin Poirier.

9. Joe Warren (6-1)
Warren claiming to be “the baddest man on the planet” seems a tad dubious. However, the former Greco-Roman wrestling world champion showed in his Sept. 2 bout with Joe Soto that he was otherworldly tough, with some power to spare. He came back from a hellacious beating in the fight’s opening round to stop Soto and take Bellator’s featherweight title 33 seconds into round two.

10. Diego Nunes (15-1)
In September, Nunes moved his WEC mark to 4-1 with a unanimous decision win over Tyler Toner. Now, “The Gun” will move to the UFC Octagon, where he will face the sternest test of his career. At UFC 125 on Jan. 1, Nunes will take on former WEC featherweight champion Mike Thomas Brown in a fight with major stakes at 145 pounds.