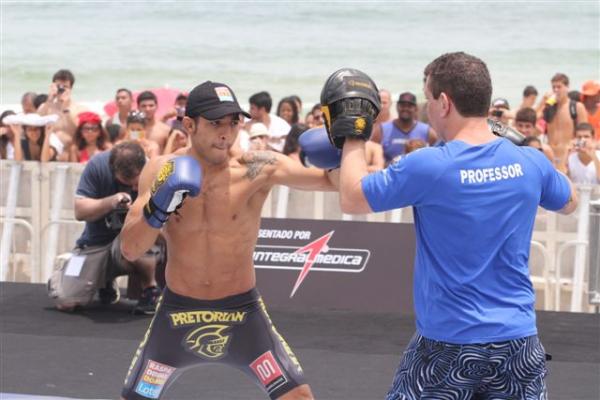 
A left thigh injury took away Jose Aldo’s chance to defend his title at UFC 149 against Erik Koch in Calgary, Alberta. However, the makeup matchup for Aldo might be even sweeter: “Scarface” will still get to face Koch, but this time at UFC 153 in Aldo’s backyard in Rio de Janeiro on Oct. 13.


It’s been a difficult task to get Bellator’s 145-pound title defended in regular fashion. After delays in bringing the Joe Warren-Pat Curran title defense to fruition, Patricio Freire came off the mend to face Curran, only for the champ to suffer an orbital bone injury and withdraw from their Aug. 24 date.


In his first performance since being knocked out in his first career loss by Jose Aldo in January, “Money” Mendes returned to action and was exactly what his nickname promised: his 31-second knockout of Cody McKenzie at UFC 148 was an emphatic statement and his first knockout in three years.


Ricardo Lamas entered Atlantic City, N.J., as a classic live underdog against Hatsu Hioki and he certainly cashed his big ticket. In the biggest opportunity of his career, the Chicagoan stayed unbeaten in his three Octagon bouts by earning three 29-28 scorecards against the Japanese standout and leaping forward into meaningful 145-pound contention.


It was another heartbreaking stumble for Hatsu Hioki on June 22 in Atlantic City, N.J., as the former Shooto world champion started strong but faded down the stretch against Ricardo Lamas. Hioki struggled to deal with Lamas’ boxing and sneaky guillotine attacks, and wound up losing a unanimous verdict.


Dennis Siver’s first 145-pound outing was a success with an April decision win over Brazilian Diego Nunes. However, to advance in UFC title contention, Siver will have to deal with hard-hitting submission specialist Eddie Yagin at UFC 151 on Sept. 1.


Nunes tasted defeat just once in his first 17 pro bouts, but has fallen in two of his last three. In order to right the ship, the Brazilian featherweight will need to take out heavy-hitting Midwesterner Bart Palaszewski on Oct. 5 at UFC on FX 5 in Minneapolis.


The first time Koch was due for a UFC featherweight title shot against Jose Aldo, he was set to challenge at UFC 149 in Calgary, Alberta. After an Aldo injury postponed the bout, Koch’s task has gotten considerably tougher. Now, the Roufusport product will have to take out Brazil’s fighting prince in front of a partisan crowd at the HSBC Arena at UFC 153 in Rio de Janeiro.


The “Korean Zombie” lived up to his name by walking through everything Dustin Poirier had to offer on May 15, then relieving the American of his consciousness with a fourth-round brabo choke. With his third straight win, Jung put himself into legitimate featherweight contention, emerging as more than just an “action fighter.”


The young man from Lafayette, La, was pegged as a future contender when he burst into the Octagon with an upset victory over Josh Grispi last January, and Poirier’s next three wins only served to reaffirm that notion. However, one win from a title shot, the “Diamond” proved a bit too rough, as Poirier succumbed to a fourth-round brabo choke from Chan Sung Jung in their May 15 encounter.