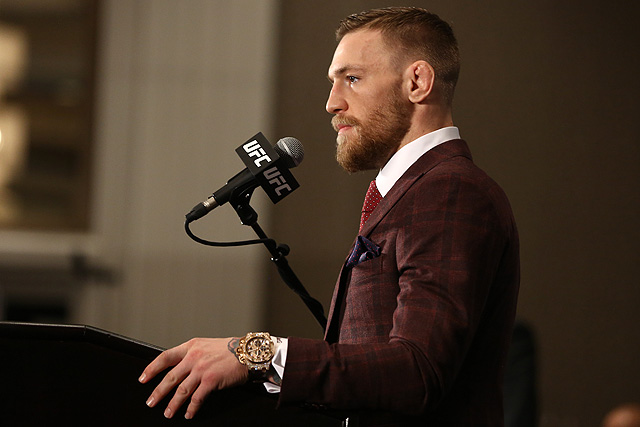 McGregor became just the second undisputed featherweight champion at UFC 194, where he unified the UFC’s 145-pound belts with a record-setting 13-second knockout of longtime ruler Jose Aldo. Next up for the “Notorious” Irishman is a champion-versus-champion super fight with lightweight boss Rafael dos Anjos at UFC 197 on March 5.

Sidelined for more than 13 months with numerous injuries, Aldo was given a rude welcome back to the Octagon at UFC 194. The Brazilian’s long-awaited bout with Conor McGregor ended in brutal fashion with a one-punch knockout that halted Aldo’s remarkable 10-year, 18-fight unbeaten streak.

Still in search of another shot at the UFC featherweight title, Edgar left no doubt in his UFC 194 bout with Chad Mendes, starching “Money” with a left hook in the opening round. After the bout, UFC President Dana White told the former lightweight champ that he is next in line to challenge for 145-pound gold. However, that fight will have to wait until newly crowned champion Conor McGregor returns from a lightweight bout.

Holloway fought a smart and technical battle against Jeremy Stephens at UFC 194, steering clear of the veteran’s heavy hands to pick him apart from range. The young Hawaiian has won eight straight fights since dropping an August 2013 decision to Conor McGregor, with whom Holloway would like a rematch, this time with a title on the line.

Mendes suffered only one defeat in his first 17 bouts as a mixed martial artist. Since then, the former college wrestler has dropped three out of four, including back-to-back knockouts in his last two fights. Mendes’ most recent fall came against Frankie Edgar at “The Ultimate Fighter 22” Finale, knocking “Money” clear out of featherweight contendership.

Previously on the cusp of title contention, Swanson has tumbled down the rankings after suffering a pair of setbacks in the past five months. First, the 31-year-old was ground out and submitted by former lightweight ace Frankie Edgar in November, and on April 18, Swanson succumbed to a third-round guillotine choke from rising star Max Holloway. The Jackson-Wink MMA fighter, who had won six in a row, will try to get back on track against Hacran Dias in April.

Oliveira took out Myles Jury with a first-round guillotine choke at UFC on Fox 17, although the Dec. 19 triumph was soured due to “Charles do Bronx” missing weight by four pounds. Nonetheless, it put the Brazilian jiu-jitsu black belt back in the win column following a freak injury loss to Max Holloway in August.

After being stopped for the first time in his UFC career during an April encounter with Chad Mendes, Lamas sought to get back on track against Diego Sanchez on Nov. 21 in Mexico. “The Bully” earned a hard-fought decision with measured striking and nasty low kicks which left Sanchez hobbled midway through the fight.

Dias used takedowns and a string of submission attempts to out-grind Levan Makashvili and nab a split decision in their June 27 meeting. The Nova Uniao product has won two straight bouts on the judges’ scorecards to rebound from consecutive losses against Ricardo Lamas and Nik Lentz. “Barnabe” will have an opportunity to move up the rankings on April 16, when he faces sixth-ranked Cub Swanson.

Stephens had few answers for the lengthy and precise striking of Max Holloway, who picked up a unanimous decision against the “Lil’ Heathen” at UFC 194. After bursting onto the featherweight scene with three straight wins, Stephens has since lost three of his last four outings on the judges’ scorecards.