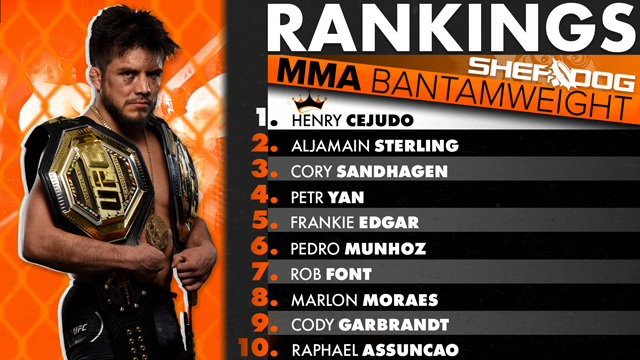 Cejudo became only the second fighter in promotion history to successfully defend titles in two divisions at UFC 249 when he defeated Dominick Cruz via second-round technical knockout in the evening’s co-main event at VyStar Veterans Memorial Arena in Jacksonville, Florida. After the victory, the Olympic gold medalist made a surprising retirement announcement, citing a desire to start a family. Retirements often don’t last in MMA, but if it holds up, “Triple C” ends his career with a six-fight winning streak that includes triumphs over Demetrious Johnson, T.J. Dillashaw, Marlon Moraes and Cruz.

After a first-round submission of Top 5 competitor Cory Sandhagen at UFC 250, “Funk Master” established himself as the bantamweight division’s No. 1 contender in waiting. Sterling, with five consecutive 135-pound triumphs under his belt, will was supposed to square off against recently-crowned champion Petr Yan at UFC 256 on Dec. 12 but that bout was postponed due to personal issues for the reigning title holder. Instead, Sterling will get his shot against Yan at UFC 259.

Sandhagen made an early bid for 2021 “Knockout of the Year” when he authored a walkoff finish of Frankie Edgar with a flying knee just 28 seconds into Round 1 of the UFC Fight Night 184 co-main event encounter at the UFC Apex in Las Vegas. The Elevation Fight Team product has displayed a penchant for the spectacular of late: Sandhagen was coming off a spinning-wheel kick KO of Marlon Moraes at UFC Fight Night 179 this past October. Sandhagen should be well positioned to face the Petr Yan-Aljamain Sterling winner later this year.

After a competitive opening 15 minutes, Yan imposed his will down the stretch against Jose Aldo at UFC 251, forcing a stoppage behind a brutal barrage of ground-and-pound in the fifth frame. The newly-crowned bantamweight king has won his first six UFC appearances in increasingly impressive fashion. Yan was slated to defend his title against Aljamain Sterling at UFC 256 but withdrew from the bout due to a litany of issues. The fight has been rescheduled for UFC 259.

Edgar’s bantamweight foray had a promising beginning, as he took a split decision triumph over Pedro Munhoz in the UFC on ESPN 15 main event. However, the narrative shifted in his second 135-pound appearance, when he suffered a flying knee KO loss to Cory Sandhagen in the UFC Fight Night 184 co-main event. The 39-year-old former lightweight champion has now suffered three knockout losses in his last six UFC appearances.

Munhoz gained a measure of revenge at UFC Fight Night 186, where he captured an entertaining three-round verdict against Jimmie Rivera on Feb. 27. Not only did the Brazilian snap a two-bout skid in the “Fight of the Night-“winning contest, but he avenged a split-decision loss to Rivera that occurred in a 2015 clash. “The Young Punisher” remains one of the bantamweight division’s unsung talents, with eight wins in 11 outings dating back to 2016..

After more than a year on the sidelines due to a knee injury, Font sent a message to the bantamweight division at UFC Fight Night 183, where he defeated former title challenger Marlon Moraes via second-round technical knockout at the UFC Apex in Las Vegas on Dec. 19. The 33-year-old Team Sityodtong member, who had Moraes outgunned on the feet, has now won three consecutive fights in UFC competition and owns six finishes in the Octagon.

Moraes came out with a different type of game plan against Rob Font, and for part of the first round, it worked. The former World Series of Fighting Champion grounded his foe for the first half of Round 1, but once the action returned to the feet it was all Font, who emerged with a technical knockout victory at the 3:47 mark of Round 1. Moraes has lost three of his last four UFC bouts — all by KO or TKO — and appears to be a step below the top contenders in the bantamweight division at this point in his career.

Garbrandt appears to be rejuvenated following a second-round knockout of Raphael Assuncao in the UFC co-main event on June 6. Not only did Garbrandt’s vicious right-hook finish likely end up on a lot of year-end KO lists, but it halted a three-bout skid in which “No Love” repeatedly fell victim to his brawling tendencies. Garbrandt was slated for a title shot at 125 pounds against Deiveson Figueiredo before a torn bicep forced him out of the contest.

Assuncao took the bait and paid dearly against Cody Garbrandt, falling victim to a brutal right hook counter just before the second-round horn in their co-headlining encounter at UFC 250 on June 6. Once the bantamweight division’s most unsung contender, the 37-year-old Brazilian has dropped his last three fights within the Las Vegas-based promotion. Assuncao was supposed return to face the surging Raoni Barcelos on Feb. 27, but a positive COVID-19 test removed the veteran from that bout.