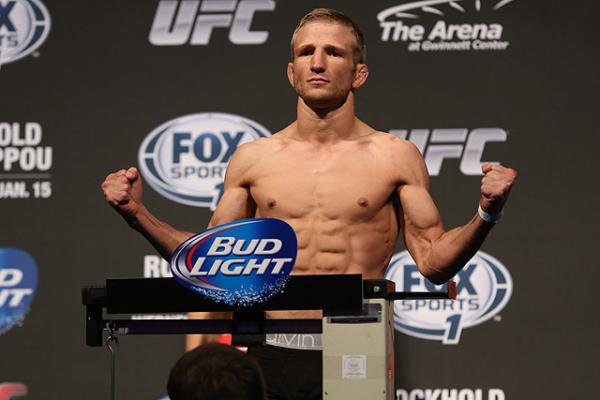 Dillashaw pulled off the improbable, as he ended bantamweight champion Renan Barao’s 33-fight unbeaten streak via fifth-round TKO in the UFC 173 headliner. The first member of Team Alpha Male to capture UFC gold, Dillashaw displayed a multi-faceted striking arsenal and superior movement throughout in a surprisingly dominant victory. The 28-year-old will try to repeat the feat on Aug. 30, when he will rematch Barao in the main event of UFC 177.

Marketed as one of the promotion’s best pound-for-pound talents prior to UFC 173, Barao saw his aura of invincibility take a hit against heavy underdog T.J. Dillashaw. The Nova Uniao product was on his heels from round one against Dillashaw, eventually falling via TKO at the 2:25 mark of round five. Despite the lopsided loss, Barao has been booked for a rematch with Dillashaw at UFC 177 in August.

Faber resumed his dominance in non-title bouts at UFC 175, as he submitted "The Ultimate Fighter" Season 12 quarterfinalist Alex Caceres with a rear-naked choke in the third round. Now 35, "The California Kid" has rattled off five wins in his last six appearances and remains a difficult out for virtually anyone at 135 pounds.

For McDonald, a win over Urijah Faber at UFC on Fox 9 might have signaled the beginning of a new era. However, Faber showed he still has plenty left in the tank by submitting “Mayday” in the second round of their co-main event clash. Just 22 years old, McDonald still has plenty of time to develop his skills.

After outpointing highly touted prospect Pedro Munhoz at UFC 170, Assuncao now quietly owns the longest winning streak among active UFC bantamweights at six fights. Assuncao was supposed to be next in line for a title shot at UFC 173 but was forced to decline the fight due to a rib injury.

Fights have been few and far between for Dantas of late, with only four bouts in the last two years, but the Bellator champion has shined bright in his most recent outings. Since his upset loss to Tyson Nam, “Dudu” has punched out top contender Marcos Galvao and most recently took out Anthony Leone with a brilliant second-round submission at Bellator 111. Dantas’ next appearance will be delayed, as a head injury suffered in training forced the Nova Uniao product to pull out of a planned title defense against Joe Warren at Bellator 118.

Stout right hands, positional control and a sturdy chin carried Mizugaki to a unanimous decision over the hard-hitting Francisco Rivera at UFC 173. After a three-year stretch of alternating wins and losses, the durable Japanese veteran has now won five straight in the Octagon. In September, Mizugaki will have a chance to collect his biggest victory yet when he faces returning former champion Dominick Cruz at UFC 178.

After eking out a split decision against Wilson Reis in February, Alcantara took the judges out of the equation in his May 31 bout with Vaughan Lee. “Marajo” dropped Lee with an overhand left and then pounded the Englishman unconscious in just 25 seconds, marking the Brazilian’s third win in four outings.

Moraes continues to roll under the World Series of Fighting banner, capturing the promotion’s inaugural bantamweight strap with a lopsided victory over Josh Rettinghouse on March 29. It was the Brazilian’s fifth straight win with the Las Vegas-based promotion, which could struggle to find viable challengers for its newly minted champion down the road.

Caraway spoiled Erik Perez’s homecoming with a second-round rear-naked choke on June 7 in Albuquerque, N.M. “Kid Lightning” has quietly assembled a 4-1 record in the UFC, with all four wins via submission and the sole loss coming in a closely contested split decision against divisional stalwart Takeya Mizugaki.