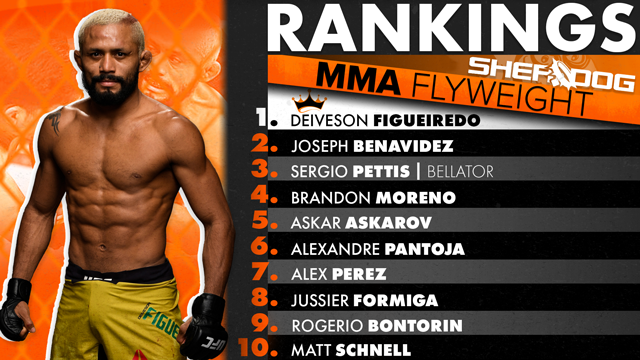 Benavidez fell to 0-4 in flyweight title bouts at UFC Fight Night 172, where he suffered a disheartening first-round submission loss to Deiveson Figueiredo in a rematch on Yas Island in Abu Dhabi. Benavidez wasn’t competitive in either bout against the Brazilian, and he acknowledged it was likely his last shot at UFC gold. Nonetheless, Benavidez remains a necessary litmus test for the rest of the division’s top contenders, and he is set for a matchup with the unbeaten Askar Askarov at UFC 259.

Pettis earned a future bantamweight title shot at Bellator 242, as he punctuated the California-based promotion’s return from a COVID-19-mandated hiatus with a unanimous verdict over Ricky Bandejas in the evening’s main event at Mohegan Sun in Uncasville, Connecticut. Pettis is 2-0 since leaving the UFC to join the California-based promotion and has won three in a row overall. He’ll vie for Bellator bantamweight gold against Juan Archuleta on May 7.

Moreno raised his stock in his championship matchup against Deiveson Figueiredo in the UFC 256 main event, battling the reigning title holder to an entertaining majority draw at the UFC Apex in Las Vegas on Dec. 12. In the aftermath, the bout was hailed as perhaps the greatest in the history of the flyweight division. “The Assassin Baby” is unbeaten in his last six professional outings with a bizarre twist: he has draws against Figueiredo and Askar Askarov during that run. He’ll get his rematch with Figueiredo at UFC 263 on June 12.

Relentless pace and pressure carried Askarov to his most significant victory to date at UFC Fight Night 172, as he outpointed fellow contender Alexandre Pantoja on Yas Island in Abu Dhabi on July 18. Though Askarov may have been fortunate to earn a majority draw against Brandon Moreno in his UFC debut, back-to-back decision wins over Pantoja and Tim Elliott have put him on the short list of top contenders at 125 pounds. Next, Askarov will lock horns with Joseph Benavidez at UFC 259 on March 6.

Pantoja proved he was no steppingstone at UFC Fight Night 184, as he relied on superior volume and activity to earn a unanimous decision triumph over former Rizin bantamweight king Manel Kape at the UFC Apex in Las Vegas on Feb. 6. The victory allows “The Cannibal” to bounce back from a decision loss to fellow flyweight contender Askar Askar last July and gives the Brazilian seven wins in 10 UFC appearances overall.

Perez’s attempt to take Deiveson Figueiredo to the mat proved to be ill advised in their UFC 255 title bout, as the reigning flyweight champion applied a tight guillotine choke to earn a tapout 1:57 into the opening stanza at the UFC Apex in Las Vegas. That disappointing defeat halts a three-bout winning streak for the Dana White’s Contender Series alum. Perez has been victorious in six of his eight promotional appearances, with his only defeats coming to Figueiredo and Joseph Benavidez. Next, he will lock horns with Matt Schnell at UFC 262 on May 15.

After authoring a four-bout winning streak from September 2017 to March 2019, Formiga appeared to be on the verge of securing a long-awaited title shot in the UFC. Since then, the Brazilian has lost three fights in a row, including a first-round TKO loss to Alex Perez at UFC 250. The man once regarded by many as the world’s top flyweight is now looking for a new home after being released by the UFC.

Bontorin tasted defeat for just the second time in his professional career at UFC Fight Night 167, as he was grounded repeatedly and outwrestled in a unanimous decision loss to Ray Borg at the Santa Ana Star Center in Rio Rancho, New Mexico, on Feb. 15. While Borg missed weight, it doesn’t make the setback any easier to accept for the Brazilian, who began his promotional tenure with triumphs over Raulian Paiva and Magomed Bibulatov. Bontorin will return to face Kai Kara France at UFC 259.

Competing for the first time since a knockout loss to Alexandre Pantoja in December 2019, Schnell showed no ill effects, as he outlanded the more heavy-handed Tyson Nam for three rounds to earn a unanimous decision triumph at UFC on ESPN 20 in Abu Dhabi. The 31-year-old Shreveport, Louisiana, native has won five of his last six promotional appearances and remains right in the thick of things in an increasingly competitive 125-pound division. Schnell’s next test is a showdown with recent title challenger Alex Perez at UFC 262 on May 15.