The pound-for-pound world in mixed martial arts is typically seen through the prism of the “big three” -- Anderson Silva, Georges St. Pierre and Fedor Emelianenko -- and then everybody else. However, Lyoto Machida capturing the light heavyweight mantle raises the question: “Is there room for a fourth?”

Machida’s destructive blowout of Rashad Evans to claim 205-pound supremacy was the most brilliant of his career and has left many fans and critics wondering who can beat “The Dragon.” Regardless of whom the most ideal candidate might be, as the leader of the pack in one of MMA’s most talented and star-rich divisions, championship consistency would put the Belem, Brazil, native into rarified air with the sport’s other pound-for-pound kings.

It is an active time for MMA’s elite fighters, as well. Seven of these 10 pound-for-pound entrants have potential bouts on the slate in the next 10 weeks, making for a fantastic early summer for the sport.

1. Anderson Silva (24-4)
Silva’s April title defense against Thales Leites was exactly the sort of performance that can undermine any man’s claim to being a pound-for-pound king. Sensing “The Spider” needed a stiffer challenge, Zuffa lined up a bout against former light heavyweight champion Forrest Griffin at UFC 101 on Aug. 8. Silva began his career by besting then top welterweights like Hayato “Mach” Sakurai and Tetsuji Kato and then moved on to dominate the middleweight division. A win over Griffin would make Silva MMA’s first man with top five-caliber victories across three weight classes.

2. Georges St. Pierre (18-2)
Over the last four years, no fighter has more victories against accomplished, outstanding opponents than St. Pierre. However, despite avenging his April 2007 loss to Matt Serra 12 months later, the specter of his smashing at the hands of “The Terror” still looms. With another great challenger in Thiago Alves on deck for his third title defense at UFC 100 on July 11, St. Pierre can continue to pave over the Serra debacle with exceptional victories.

3. Fedor Emelianenko (30-1, 1 NC)
No one has ever reigned in MMA like Emelianenko. The only knocks on the sport’s heavyweight king has been the fact that he’s plagued by a thinner division than some of the sport’s other stalwarts and has not fought his best contemporaries recently. Fortunately, this has changed over the last year with his demolitions of Tim Sylvia and Andrei Arlovski. If an August bout with Josh Barnett comes to fruition, it will mark Emelianenko’s third consecutive match against a top 10 former UFC heavyweight champion; it’s the kind of schedule that befits the sport’s epic heavyweight. 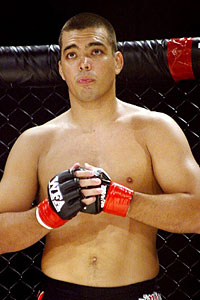 Photo by Sherdog.com
Lyoto Machida is closing
in on the top three in MMA.
4. Lyoto Machida (15-0)
Machida’s sub-nine-minute blowout of Rashad Evans was a bold statement proclaiming his arrival as MMA’s light heavyweight king. “The Dragon” has considerable pound-for-pound upside, as well, as the UFC’s 205-pound division offers him a slew of accomplished and outstanding fighters on which to build a resume. Unfortunately, his first title defense will not be the anticipated showdown with Quinton “Rampage” Jackson, who is now bound for coaching duty on Season 10 of “The Ultimate Fighter.”

5. Miguel Torres (37-1)
Seventeen straight wins over a nearly six-year-long undefeated run is telling when it comes to Torres’ divisional dominance. However, the bantamweight division remains a nascent one in mixed martial arts, and it’s only now that Torres is finally getting the opportunities to fight fellow stalwarts. Coming off a unanimous decision win against Takeya Mizugaki in of one of the year’s best bouts in April, Torres will have the chance to put yet another outstanding notch on his belt when he takes on the undefeated Brian Bowles at WEC 42 on Aug. 9.

6. B.J. Penn (13-5-1)
Skill has never been the question with Penn, who was nicknamed “The Prodigy” for a reason. However, results are the measuring stick of sporting success, especially in prizefighting, and Penn has yet to settle into the role of lightweight ruler that has always been expected of him. He will be afforded the chance to prove himself as the sport’s most dominant 155-pound athlete and put another name on his resume when he risks his UFC title against well-deserving challenger Kenny Florian at UFC 101 on Aug. 8.

7. Quinton Jackson (30-7)
In his last five fights, Jackson is 4-1 against five straight top 10 opponents in one of MMA’s deepest divisions. Needless to say, a matchup in which he attempted to reclaim the UFC title and light heavyweight mantle from Lyoto Machida would have been exactly the sort of high-stakes relevance for which the sport thirsts. Fortunately, his second “The Ultimate Fighter” coaching stint will lead to a showdown with Rashad Evans, which is nothing at which to sneeze.

8. Mike Thomas Brown (21-4)
From 1999 to 2006, Alexandre Franca Nogueira reigned over MMA’s featherweight class in its sparse and embryonic stages. However, since the division has developed fully, no fighter has stepped out and dominated. In his June 7 rematch with Urijah Faber, the unassuming Brown will have the chance to become the first 145-pounder to truly reign over his best contemporaries in the weight class; should he win, it will mark his fourth straight top 10 win. Better still, with the likes of Wagnney Fabiano and Jose Aldo in the WEC’s ranks, Brown has no shortage of strong challengers waiting in the wings.

9. Thiago Alves (16-3)
MMA is a sport in which fans and pundits tend to pore over, celebrate and critique the resumes of champions. However, MMA is also replete with rock-solid contenders who have accrued multiple standout wins. Alves had arguably the best year of any fighter in 2008, as he knocked off three consecutive top 10 opponents in a great division and earned himself a title shot against Georges St. Pierre at UFC 100 in July.

10. Rashad Evans (13-1-1)
Evans rose to the top of the light heavyweight division in 2008. However, 2009 opened brutally for Evans, who was outmatched and blown away by new divisional king Lyoto Machida. Unlike many other deposed champions, Evans has the chance to rectify his resume in short order due to the strength of his divisional contemporaries. Evans’ road to redemption will now run through Season 10 of “The Ultimate Fighter,” as he’ll coach against fellow 205-pound stalwart Quinton “Rampage” Jackson, setting up a clash later this year.