Anderson Silva has sat atop Sherdog.com’s pound-for-pound list since September 2007. Though there has always been spirited debate over whose accomplishments reign supreme in the sport, Silva’s alpha dog status came under critical fire following dismal victories over Patrick Cote and Thales Leites. Sterling wins over elite fighters like Dan Henderson and Nate Marquardt, as well as his pair of destructions of Rich Franklin, seemed like distant memories.

Saturday night in Philadelphia, those memories came flooding back.

In just more than three minutes, Silva destroyed Forrest Griffin, a former entrant on this list, in stark and brutal fashion. The victory was so convincing that it actually served as a catalyst, as “The Spider” ran away with the Sherdog.com fan poll asking readers who they felt was the top pound-for-pound fighter in the sport. Fifty-three percent of the 40,000-plus votes cast favored the Curitiban.

The weekend was not entirely kind to pound-for-pound standouts, however. Miguel Torres looked to become the first bantamweight in the history of the sport to piece together a consistent, quality resume. However, his 17-fight winning streak was quickly snapped, as unbeaten challenger Brian Bowles punched him out in the first frame and took his spot atop the 135-pound division.

1. Anderson Silva (25-4)
After lackluster efforts in his middleweight title defenses against Cote and Leites, Silva drew the scorn and ire of fans, fighters, journalists and even UFC President Dana White. However, in his 205-pound bout with former UFC light heavyweight champion Griffin on Aug. 8, Silva smashed a quality fighter in historically brutal fashion. There are rumblings now that “The Spider” will vacate his middleweight crown in favor of a permanent move to 205 pounds, which would allow him to continue to add to an outstanding resume.

2. Georges St. Pierre (19-2)
Talk had brewed of a pound-for-pound super fight following St. Pierre’s July handling of top contender Thiago Alves, but with Silva’s blowout of Griffin, discussions of St. Pierre-Silva have cooled. That works fine for St. Pierre, who is keen to continue defending his welterweight title. He now awaits his next contender -- the winner of the Mike Swick-Martin Kampmann title eliminator at UFC 103 on Sept. 19.

3. Fedor Emelianenko (30-1, 1 NC)
Just as fellow pound-for-pound kings Silva and St. Pierre had blockbuster summer bouts to add to their respective resumes, Emelianenko was scheduled to meet Josh Barnett at Affliction “Trilogy” on Aug. 1. One failed pre-licensing drug test later, Emelianenko no longer had a fight due to Barnett’s most recent steroid indiscretions. The sport’s heavyweight ruler has since signed with Strikeforce and will make his promotional debut in the fall.

4. Lyoto Machida (15-0)
Many fans and pundits are already calling for Zuffa to put enough money on the table to grease the wheels of a Machida-Silva showdown. Whether or not Machida ever ends up fighting his pal, the Shotokan stalwart still has a date with rejuvenated light heavyweight Mauricio “Shogun” Rua at UFC 104 in October in what will be the first defense of his UFC light heavyweight title. 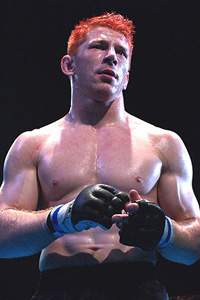 Stephen Martinez/Sherdog.com
The unassuming featherweight
ruler of MMA clocks in at five.
5. Mike Thomas Brown (22-4)
The unassuming featherweight ruler of MMA has turned in a stellar run over the last three years, with 10 victories in a row, including a pair of wins over former featherweight kingpin and pound-for-pound entrant Urijah Faber. As Zuffa continues to gobble up more and more top featherweights under the WEC banner, Brown will have the chance to put together a muscular resume. However, the biggest challenge for the 33-year-old American Top Teamer may be his next one, as he will meet fire-breathing 22-year-old phenom Jose Aldo in November.

6. B.J. Penn (14-5-1)
Penn may be the most gifted fighter on this list. At UFC 101, he showed exactly why the MMA world anointed him from day one, as he put on arguably his most consummate performance as a prizefighter, nullifying Kenny Florian for 15 minutes before routing him in the fourth frame and finishing him by submission. The next challenger to Penn’s UFC lightweight title figures to be Diego Sanchez in the coming months. If Penn chooses to continue his reign as a lightweight -- the role everyone but he himself has long desired -- he will only climb this list and validate his enormous talent.

7. Quinton Jackson (30-7)
Between his energy drink-fueled legal indiscretions, lascivious actions in video interviews and candid quotes, Jackson does not always stay relevant due to his fighting accomplishments. However, Jackson is 4-1 against five straight top 10 opponents in one of MMA’s deepest divisions. His sixth straight 205-pound standout foe will be Rashad Evans in December, after the two square off as coaches on the forthcoming season of “The Ultimate Fighter.”

8. Jon Fitch (19-3, 1 NC)
Fitch does not have the scintillating offense of a Silva, Emelianenko or Penn, and he’s the only entrant on this list who has not won a major title in the UFC, WEC or Pride. What Fitch does possess, however, is a gaudy 10-1 mark in the UFC, as he has racked up top 10 victories in MMA’s historically deepest and most talented division. He may be the welterweight division’s perennial second banana, but that remains an extremely meritorious position.

9. Rashad Evans (13-1-1)
Evans’ first defense of the UFC light heavyweight belt in May was a disaster, as he was dominated from bell-to-bell by Machida. However, Evans will have the chance to get back in line for a rematch with Machida, add to his resume and up his Q-rating. He will coach opposite Jackson on the 10th season of “The Ultimate Fighter,” which will lead up to a high-profile December showdown between the two.

10. Brian Bowles (8-0)
With a gaudy record and an all-out action style, Miguel Torres was supposed to be the first great bantamweight in MMA history, bringing the division to the masses. However, Bowles had other plans, as he punched out the pound-for-pound entrant in the first round, staked his claim as the sport’s top 135-pounder and earned a place on this list. Now, it will be up to Bowles to continue adding to what is quickly becoming a high-quality resume, especially by the standards of a division where historically few top fighters have fought one another. The first defense of Bowles’ newly-acquired crown will likely come against fellow upstart Dominick Cruz.

* After his Aug. 9 defeat at the hands of Bowles, the previously fifth-ranked Torres falls just outside of the pound-for-pound top 10.