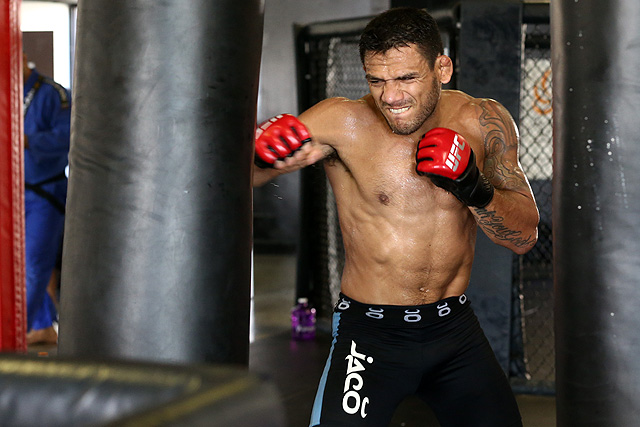 At UFC 185, the 30-year-old jiu-jitsu black belt used a multifaceted, high-pressure game plan to thoroughly dominate Anthony Pettis across five rounds and become the Ultimate Fighting Championship’s first Brazilian champion at 155 pounds. Dos Anjos’ ascent to the lightweight throne was not a quick one: The Rafael Cordeiro pupil has competed inside the Octagon since 2008 and on March 14 officially became the latest bloomer in company history, winning the belt in his 18th UFC fight.

Dos Anjos has shown near-constant improvement while stringing together a remarkable run over the past three years, emerging victorious from nine of 10 bouts, with his only loss coming in a decision against top contender Khabib Nurmagomedov. Following that setback, in the second half of 2014, the Rio de Janeiro native scored stoppages of Benson Henderson and Jason High before an impressive three-round spanking of Nate Diaz. Dos Anjos makes his entry into the pound-for-pound rankings in the No. 7 position, while Pettis tumbles four spots to No. 8.

While neither dos Anjos nor Pettis figures to fight again in the next month or so, both men could soon find themselves moving up in the top 10. Sixth-ranked Anderson Silva, currently serving a temporary suspension from the Nevada Athletic Commission, is expected to receive a lengthier ban when the NAC convenes for its as-yet-unscheduled next meeting. Should the former middleweight champion and pound-for-pound king be suspended for one year or more, he will be removed from Sherdog.com’s pound-for-pound and divisional rankings.

The UFC’s 205-pound king continues to find ways to beat all those placed before him. At UFC 182, it was Daniel Cormier who clashed with Jones after a protracted battle of words in what was expected to be the hardest fight of the Jackson-Wink MMA fighter’s title reign. Though “DC” did not go down quietly, Jones neutralized the wrestler’s takedown attempts and used his freakish reach to punish Cormier with strikes, both at range and in the clinch. Having secured a five-round unanimous decision -- with all three judges giving Jones four rounds to Cormier’s one -- “Bones” stands as the most decorated light heavyweight champ in UFC history, with eight consecutive title defenses. Jones will attempt to make it nine in May, when he faces fearsome puncher Anthony Johnson at UFC 187.

Aldo was unable to score a second knockout of Chad Mendes in their UFC 179 rematch, but the end result was perhaps even more satisfying and more indicative of Aldo’s status as a pound-for-pound great. The featherweight ruler battled through more than a little adversity across his 25 minutes with Mendes, surviving an uppercut-induced knockdown to kick things into another gear and outclass the Team Alpha Male standout on the feet down the stretch. After seven straight title defenses, Aldo looks to be headed for the biggest fight of his career, as “Scarface” will attempt to derail the hype train of Irish standout Conor McGregor at UFC 189 in July.

The “All-American” showed his all-around skills with a decisive title defense against ex-light heavyweight champion Lyoto Machida at UFC 175. While Machida was able to tag the Serra-Longo Fight Team representative in the waning moments of their five-round encounter, the work Weidman did with his hands, kicks and takedowns through the first four frames was more than enough to retain his UFC middleweight title. The New Yorker’s unblemished résumé includes victories over two of Brazil’s finest fighters -- Machida and Anderson Silva (twice) -- and Weidman will look to add a third when his long-delayed clash with Vitor Belfort finally takes place at UFC 187.

In the two years he has held the UFC flyweight title, Johnson has made it clear: When it comes to 125-pounders, there is “Mighty Mouse,” and then there is everyone else. The 28-year-old Matt Hume pupil made an example of Chris Cariaso at UFC 178, forcing the overmatched Californian to submit to a kimura -- a first in an Ultimate Fighting Championship title bout. Johnson’s lauded speed and well-polished, all-around skill set have now carried him to seven consecutive victories, including five straight title defenses against the likes of Joseph Benavidez and John Dodson. At UFC 186, Johnson will put his belt on the line against hard-hitting Japanese prospect Kyoji Horiguchi.

Velasquez removed any doubt relating to the identity of the best heavyweight in the world by administering a brutal beating to Junior dos Santos at UFC 166. The final bout of the trilogy was never really in doubt, as the American Kickboxing Academy ace dominated in the clinch and rarely allowed his opponent any space to unleash his formidable boxing. Velasquez dropped his opponent in the third round and earned the stoppage late in the fifth, where dos Santos finally wilted after hitting his head on the canvas following a failed guillotine attempt. Unfortunately, injuries have kept Velasquez from the cage in the year since, but his canceled engagement with now-interim champ Fabricio Werdum has been rescheduled for UFC 188 in Mexico City.

Silva may be the greatest fighter in MMA history, but things are not looking up for “The Spider” at the moment. After breaking his left leg in horrific fashion in a December 2013 rematch with Chris Weidman, it was unclear whether the 39-year-old would ever fight again. Thirteen months later, Silva was back in the cage, earning a five-round unanimous decision over upsized welterweight Nick Diaz in the main event of UFC 183. As it turns out, Silva’s incredible recovery was apparently aided by performance-enhancing drugs. Currently serving a temporary suspension from the Nevada Athletic Commission for failing a pre-fight drug test, Silva is expected to receive a longer punishment at the commission’s next hearing, where he will reportedly admit to using PEDs.

At UFC 185, dos Anjos proved that good things come to those who wait when he earned the UFC lightweight title after more than seven years with the organization. For 25 minutes, the well-rounded Brazilian put on a near-perfect performance, dominating the dynamic Anthony Pettis like none before. Dos Anjos has won nine of his last 10 appearances, including a knockout of durable ex-champ Benson Henderson and a decision win against currently streaking contender Donald Cerrone. The shark-infested waters at 155 pounds are never short of challengers champing at the belt -- though dos Anjos would doubtless like to settle the score with the only man to beat him in the past three years, Khabib Nurmagomedov.

It was a rare sight at UFC 185, where “Showtime” was not only unable to win but really unable to implement any part of his diverse skill set thanks to stifling pressure from challenger Rafael dos Anjos. Pettis tasted defeat for the first time since 2011 and lost his UFC lightweight title in the process, as dos Anjos scored a clean sweep on the judges’ scorecards. Prior to the March 14 loss, Pettis spent three years scoring highlight-reel finish after highlight-reel finish against the cream of the 155-pound crop: Benson Henderson, Donald Cerrone and Gilbert Melendez all fell to the Roufusport fighter in one of the most impressive recent runs the division has seen.

Entering the sport later than most, Cormier went on a remarkable run during the first five years of his MMA career. The former Olympian took out the likes of Dan Henderson, Josh Barnett, Antonio Silva and Frank Mir, even while spending most of that run as an undersized heavyweight. After dropping to 205 pounds, the 35-year-old was expected to give UFC champion Jon Jones a much-needed run for his money, and that Cormier did in the main event of UFC 182. However, after taking a round from the champion early, Cormier faded down the stretch, overwhelmed by Jones’ size and athleticism, and “DC” was handed his first mixed martial arts loss via five-round unanimous decision. Cormier will attempt to bounce back when he meets fellow wrestler Ryan Bader on June 6 in New Orleans.

Despite lagging in the middle rounds of his UFC 181 rematch with Johny Hendricks, Lawler charged hard down the home stretch and did enough to earn a split decision, along with the UFC welterweight title. Little was expected of Lawler when he re-entered the Octagon in 2013, having gone 3-5 during his stint with Strikeforce. However, the Pat Miletich protégé has blossomed in his second UFC run, knocking off contenders like Matt Brown and up-and-comers like Rory MacDonald on his way to the belt. Lawler will make his first title defense at UFC 189 in a rematch with MacDonald, who has gone on a three-fight tear since their first meeting.

With the entry of Rafael dos Anjos, previously 10th-ranked Johny Hendricks falls outside the pound-for-pound top 10.