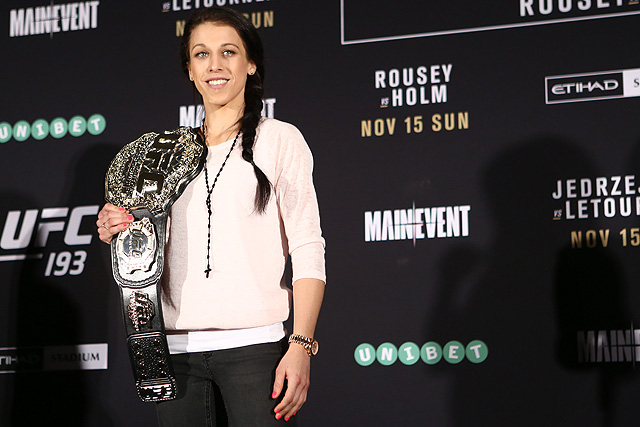 It was a quiet couple of months with no shake-ups in the Sherdog.com women’s pound-for-pound rankings -- and then Holly Holm happened.

Holm turned the sport on its ear by kicking Ronda Rousey in the face at UFC 193, dethroning the queen of MMA and snatching the Ultimate Fighting Championship women’s bantamweight crown in one fell swoop. Although the former boxing titlist rightfully grabbed most of the media attention with her near-flawless performance, Holm’s historic upset cleared the way for another UFC champion to ascend to the No. 1 spot in this top 10.

Joanna Jedrzejczyk, the Polish muay Thai stylist currently ruling the 115-pound division, kept hold of her title in the Nov. 15 co-main event by outpointing upset-minded Valerie Letourneau across five rounds. Unlike Holm, “Joanna Champion” did not have a perfect outing; in fact, at times in the early rounds, she looked downright beatable. However, the true qualities of a champion, as the cliche goes, shine through during the tough times, and Jedrzejczyk overcame her slow start to gradually pick apart Letourneau and take control of the contest.

Consistent and decisive performances over tougher competition give Jedrzejczyk the edge over her fellow striker when it comes to the top spot, though votes were close amongst Sherdog’s ranking panel.

In this update, Jedrzejczyk takes the No. 1 ranking previously held by Rousey, who falls two places to No. 3. Holm, who was outside of pound-for-pound discussion before this outing, sits between them at No. 2. With the entry of Holm, former No. 10 Alexis Davis falls off the list.

Jedrzejczyk put on another striking clinic at UFC 193, this time pushing back after early resistance from underdog challenger Valerie Letourneau. The strawweight ace took a few licks from Letourneau before taking charge by doing what Jedrzejczyk does best: dismantling her foes with technical striking, including laser-beam punches and stinging low kicks. It was the second successful defense for “Joanna Champion” since claiming the belt from Carla Esparza in March, with a three-round mauling of Jessica Penne in between. Next up figures to be a rematch with Claudia Gadelha, who was dealt her first and only loss by Jedrzejczyk a year ago in a narrow split decision.

In her first two Octagon appearances, Holm showed glimpses of the devastating kickboxing skills which got her a spot on the big stage after just seven pro MMA bouts. At UFC 193, “The Preacher’s Daughter” let it all hang out. Holm was precise and punishing in her stunning upset of Ronda Rousey, acting as a buzzsaw into which the UFC’s superstar continually ran. Holm’s second-round head kick heard ‘round the world signaled the end of Rousey’s invincibility and the start of a new era in women’s MMA -- not to mention the installation of a new 135-pound champion with standup credentials to strike fear into any challenger. It seems likely that Holm, who now owns seven knockouts in 10 outings, will need to defeat Rousey again before moving on to any new challengers.

Rousey’s reign as UFC bantamweight champ and pound-for-pound queen came to a screeching halt on Nov. 15 in Melbourne, Australia, where the judoka-turned-Hollywood star was dismantled by former boxing champ Holly Holm in one of the biggest upsets in MMA history. The aggression which had become Rousey’s trademark ultimately led to her downfall, as she repeatedly ran into Holm’s left hand before being knocked out cold by a head kick early in round two. The timeline for Rousey’s return is unknown, but the UFC is already angling for a rematch between its biggest attraction and the woman who upset the apple cart.

“Cyborg” continues to steamroll all opponents placed before her inside the cage. The Brazilian powerhouse’s latest victim was Faith Van Duin, whose July 9 bid for the Invicta Fighting Championships featherweight title lasted a mere 45 seconds. Justino, who is unbeaten in 15 fights over the past 10 years, was on her way down to 140 pounds as a test run for a potential 135-pound bout with Ronda Rousey. With Rousey suffering her first loss at the hands of Holly Holm, the future of that long-discussed super fight seems uncertain.

The first defeat of Gadelha’s MMA career -- a razor-thin split decision defeat to Joanna Jedrzejczyk -- seems only to have motivated the Brazilian jiu-jitsu black belt. Gadelha was relentless in her Aug. 1 bout with Jessica Aguilar, beating and bloodying the former World Series of Fighting titlist for three rounds en route to a unanimous decision. With the win, Gadelha secured the right to rematch Jedrzejczyk; this time, the Polish fighter’s UFC strawweight belt will be on the line.

Aguilar went unbeaten for nearly five years, racking up 10 straight wins over the likes of Carla Esparza and Megumi Fujii (twice). She captured the World Series of Fighting strawweight title and was, until just recently, ranked at the top of the 115-pound division. The American Top Team fighter’s streak ended in her UFC debut on Aug. 1, when she ran up against top contender Claudia Gadelha at UFC 190. Aguilar had little answer for Gadelha’s quick hands and powerful takedowns; nonetheless, “Jag” hung tough until the end and suffered a unanimous decision defeat.

Zingano’s grit and determination inside the cage helped her score come-from-behind wins against Miesha Tate and Amanda Nunes to become the UFC’s top bantamweight contender. The same qualities helped the Colorado native return to action following ACL surgery and the death of her husband in 2014. However, in her long-awaited title shot against Ronda Rousey at UFC 184, “Alpha Cat” had little chance to display her skills or resolve, as a 14-second armbar dashed Zingano’s championship hopes.

Tate took what Jessica Eye had to offer and kept on coming, fighting her way back into their July 25 encounter with pressure on the feet and on the floor. “Cupcake” controlled the later rounds to emerge from the bout with a unanimous decision and remain one of the top UFC contenders at 135 pounds.

Honchak has been nothing but dominant since winning the Invicta flyweight belt -- a little too dominant, perhaps. “The Little Warrior” drew criticism with her latest title defense, a November 2014 rout of Takayo Hashi which saw Honchak outwork the Japanese vet in the clinch for the better part of five rounds. Regardless of her tactics, there can be no denying the Pat Miletich student’s results: Honchak is currently riding a nine-fight winning streak and has not suffered a loss since September 2010.

Esparza’s collegiate wrestling base propelled her through “The Ultimate Fighter” Season 20 and helped her defeat Rose Namajunas to become the inaugural UFC women’s strawweight champion, but it did not help her at all against Joanna Jedrzejczyk at UFC 185. Unable to bring the polish striker to the ground, Esparza suffered through an early candidate for “Beatdown of the Year” before being punched senseless in the second round. It was the 27-year-old’s first knockout loss in 13 bouts and snapped a five-fight winning streak which saw the “Cookie Monster” take out the likes of Felice Herrig and Bec Rawlings.