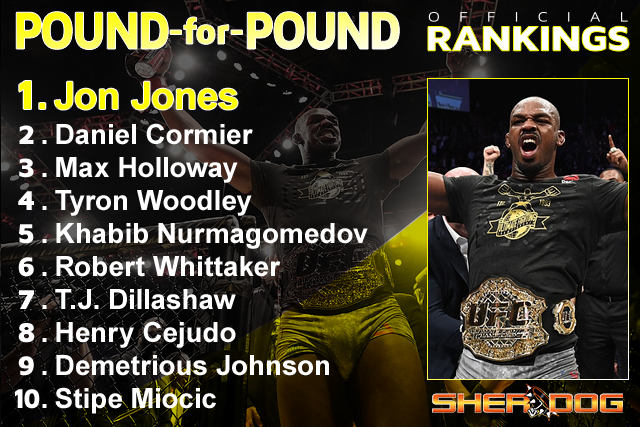 Love him or hate him, Jon Jones is back on top.

While many observers will chose to place an asterisk next to Jones’ accomplishments due to his many transgressions, not the least of which includes a questionable drug test history, there is no one better once the Octagon door closes. “Bones” proved that once again at UFC 232, as he was rarely threatened by Alexander Gustafsson en route to a third-round technical knockout victory in a clash for the vacant light heavyweight belt at the Forum in Inglewood, California. It was a far cry from their first meeting, when the Swede took Jones to the brink of defeat some five years ago at UFC 165. That Jones could dispatch a man regarded as the world’s third best light heavyweight speaks volumes about his standing -- not only in the division, but in the sport as a whole.

As a result, Jones returns to claim the top spot in our pound-for-pound poll, a designation he lost due to inactivity from numerous suspensions and sanctions. While Jones’ placement was a divisive topic among Sherdog.com staff and contributors, the final rationale is simple: The Jackson-Wink MMA product still owns an undisputed head-to-head triumph over Daniel Cormier, the previous No. 1, at UFC 182. That, despite all that has followed since then, still carries plenty of weight.

For the time being, Jones’ return to the pound-for-pound rankings signals the exit of Tony Ferguson, an action that feels criminal considering El Cucuy’s 11-fight winning streak. However, 2019 will bring plenty of opportunity for change in this poll. But for now, it’s time to welcome back one of its staples -- for however long he proves capable of sticking around.

As long as Jones stays out of trouble, there is no better fighter at 205 pounds. The Jackson-Wink MMA standout reminded the world of his greatness at UFC 232, when he emphatically defeated Alexander Gustafsson by third-round technical knockout at the Forum in Inglewood, California. It was a far cry from their first meeting at UFC 165 in 2013, when the lanky Swede took Jones to the brink of defeat before losing a unanimous decision. After dispatching Gustafsson, Jones targeted rival Daniel Cormier for a third meeting at 205 pounds — although it might be more beneficial for “DC” if the fight occurred at heavyweight.

The best thing you can say about Cormier’s effort at UFC 230 was that it was predictable. “DC” landed multiple takedowns on underdog Derrick Lewis before securing a tapout with a rear-naked choke at the 2:14 mark of the second stanza. With the win, Cormier became the first fighter to defend titles from two divisions in UFC history, though he will officially be stripped of the 205-pound crown when Jon Jones and Alexander Gustafsson step into the Octagon at UFC 232 on Dec. 29. He also set the stage for his anticipated showdown with Brock Lesnar early next year, targeting UFC 235 on March 2 for his farewell bout.

Woodley continues to make his case to be known as the “Greatest of All Time” at welterweight. In the UFC 228 headliner, “The Chosen One” dispatched Darren Till via second-round submission, tapping out his English opponent with a brabo choke in the second frame. Unbeaten in his last seven Octagon appearances and the owner of the longest active title defense streak in the UFC, Woodley is in a great spot right now -- regardless of how history currently sees him.

Nothing quite slams the door on a rivalry like back-to-back knockouts. Dillashaw did just that in the UFC 227 headliner with his second finish in as many outings against former Team Alpha Male training partner Cody Garbrandt. The Duane Ludwig protege has won eight of his last nine fights in the Octagon and is securely in the Greatest of All-Time discussion for his division. A showdown with Henry Cejudo will be next for Dillashaw at UFC Fight Night in Brooklyn on Jan. 19 with the 125-pound belt on the line.

When Cejudo made his mixed martial arts debut on the regional circuit, Demetrious Johnson was already the UFC’s reigning flyweight champion. When he squared off with “Mighty Mouse” the first time, he clearly was not ready, losing via first-round technical at UFC 197. The second time around, Cejudo had clearly evolved, and he ended Johnson’s record title reign with a split decision triumph in the UFC 227 co-main event. While Cejudo’s division may be on its last legs in the UFC, he will defend his flyweight crown against 135-pound champ T.J. Dillashaw at the UFC’s debut on ESPN+ in Brooklyn, N.Y. on Jan. 19.

All good things must come to an end, including Johnson’s record streak of 11 successful flyweight title defenses. “Mighty Mouse” did not go down easily, losing a tension-filled split decision to Henry Cejudo in the UFC 227 co-main event at the Staples Center in Los Angeles. With that, Johnson’s run in the UFC has reached its end, as the promotion “traded” the pound-for-pound stalwart’s contract for that of former One Championship and Bellator welterweight titlist Ben Askren. Johnson is scheduled to take part in One’s upcoming 125-pound grand prix tournament, beginning with a matchup against Yuya Wakamatsu on March 31..