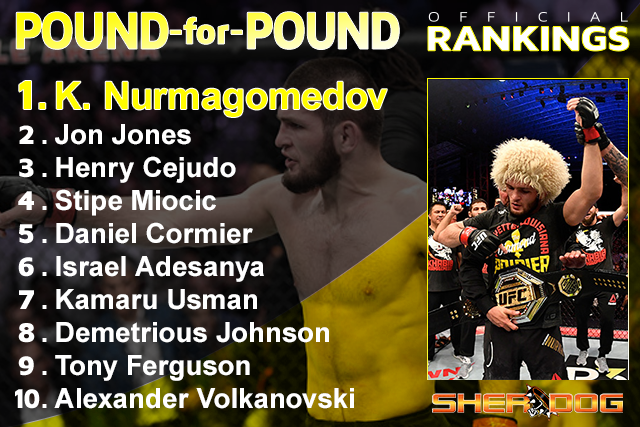 
Advertisement
“Bones” retained his light heavyweight crown in the UFC 247 headliner, edging a hard-charging Dominick Reyes in a contentious unanimous decision victory. While more than a few observers thought Reyes banked the first three rounds, the cageside judges in Houston saw a different fight. That said, it was a closely-contested bout all the way through, and Jones deserves credit for a strong effort in the championship rounds.

Still, pound-for-pound polls demand complete dominance, and a controversial triumph – especially on the heels of a split verdict over Thiago Santos last summer – casts doubt on Jones’ title as the undisputed best fighter in the sport. In recent times, UFC lightweight king Khabib Nurmagomedov has been the more impressive force and as a result, he assumes the top position in our latest pound-for-pound rankings.

Nurmagomedov needed less than 15 minutes to dispatch Dustin Poirier at UFC 242, and he made it look astonishingly easy. “The Eagle” overwhelmed his opponent with takedowns and pressure from the outset of the bout, gradually wearing Poirier down until he secured the rear-naked choke submission at the 2:06 mark of Round 3. The reigning lightweight champion’s winning streak is now at 12, which ties him with Tony Ferguson for the sixth-longest winning streak in UFC history. Barring injury, Nurmagomedov will finally square off against Ferguson with lightweight gold on the line at UFC 249 on April 18 in Brooklyn, N.Y.

The competition is catching up to Jones, but it hasn’t surpassed him just yet. “Bones” survived by the skin of his teeth at UFC 247, as he edged Dominick Reyes in a unanimous verdict in the evening’s headliner at the Toyota Center in Houston. In a fight that many observers scored in favor of Reyes, Jones was able to sway the scorecards with consistent forward pressure and a strong push in the championship rounds. The hard-fought triumph gives Jones 14 victories in championship fights, the most in the history of the Las Vegas-based promotion. Each fight seems to be getting more difficult, so the future could be very interesting for the Jackson-Wink standout.

After a shaky first round, Cejudo turned up the heat on Marlon Moraes in the UFC 238 main event, winning via third-round technical knockout to become the fourth simultaneous two-division champion in the history of the Las Vegas-based promotion. “The Messenger” has been on the shelf since besting Moraes as he recovers from shoulder surgery. However, it appears flyweight is no longer in his plans, as he relinquished the 125-pound belt in late December. Cejudo’s return appears set for UFC 250 on May 9, when he will reportedly defend the bantamweight crown against Jose Aldo in Sao Paulo, Brazil.

Adesanya may have already been a star heading into UFC 243, but now “The Last Stylebender” is one of the Las Vegas-based promotion’s brightest lights. The Nigerian-born Kiwi ended the Robert Whittaker’s middleweight title reign in Melbourne with a pair of counter hooks and follow-up ground strikes at the 3:33 mark of Round 2. Adesanya has won seven consecutive fights in the Octagon, and seemingly already had a No. 1 contender in waiting in hulking Brazilian Paulo Henrique Costa. However, with Costa still recovering from a torn bicep, Adesanya will make his first defense against Yoel Romero at UFC 248 on March 7.

Usman endured a challenging first title defense, as he battled Colby Covington for nearly five rounds before earning a technical knockout victory at the 4:10 mark of the fifth round in the UFC 245 main event at the T-Mobile Arena in Las Vegas. Usman survived Covington’s high output early and gradually asserted himself as the bout wore on thanks to solid body work and harder strikes overall. “The Nigerian Nightmare” has begun his UFC tenure with 11 consecutive victories, and the latest was his most difficult to date. Next, Usman is expected to face the red-hot Jorge Masvidal at a UFC event during International Fight week in July.

Johnson added a new piece of hardware to his collection in Tokyo, as he outpointed Danny Kingad to capture the One Championship flyweight grand prix belt on Oct. 12. After losing the UFC 125-pound strap to Henry Cejudo in August 2018, “Mighty Mouse” was traded to a new organization and pieced together victories over Yuya Wakamatsu, Tatsumitsu Wada and Danny Kingad within the Singapore-based promotion in 2019. While it wasn’t always a cakewalk for the AMC Pankration product, the accomplishment was made even more impressive considering the fact that all three triumphs occurred essentially one weight class above the division where Johnson established himself as one of the sport’s most dominant competitors. A showdown with reigning One flyweight tiltlist Adriano Moraes awaits Johnson on April 11.

It wasn’t necessarily the ending he envisioned, but Ferguson appeared to be well on his way to defeating Donald Cerrone at UFC 238 before the contest was halted prior to round three due to “Cowboy’s” swollen eye. Cerrone certainly got his shots in, but “El Cucuy” utilized his usual multi-faceted offensive approach to land more than 50 significant strikes in both the first and second rounds. With 12 consecutive wins under his belt, there is no more deserving No. 1 contender at lightweight than Ferguson. “El Cucuy” will challenge Khabib Nurmagomedov for the lightweight crown at UFC 249 in Brooklyn on April 18.