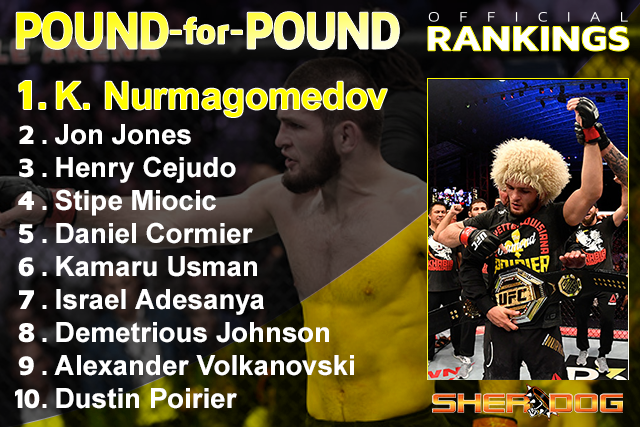 For Justin Gaethje, violence and technical prowess have come together at the ideal time.

The former World Series of Fighting titlist added some new hardware to his trophy case at UFC 249, where he defeated Tony Ferguson via fifth-round technical knockout on Saturday to claim the interim lightweight crown. It was a surprisingly lopsided affair, as Gaethje battered and bloodied “El Cucuy” for the majority of the contest to end his opponent’s 12-bout winning streak. Gaethje has evolved greatly since the beginning of his UFC tenure, and with that evolution comes a spot at No. 11 on Sherdog.com's Pound-for-Pound rankings. Gaethje might have made the Top 10 were it not for the presence of Dustin Poirier, the last man to defeat “The Highlight” in UFC competition. Gaethje could have the opportunity to rise much higher in the future, as a date with reigning 155-pound king Khabib Nurmagomedov looms.

Elsewhere, Henry Cejudo continued his “legacy rampage” with a second-round TKO of former champion Dominick Cruz in the UFC 249 co-main event. While the stoppage was somewhat controversial, Cejudo looked to be in control up until the finish. “Triple C” announced his retirement after the bout, but for now, he’ll remain No. 3 in our poll because there’s still a decent chance the Olympic gold medalist changes his mind about that decision.

Nurmagomedov needed less than 15 minutes to dispatch Dustin Poirier at UFC 242, and he made it look astonishingly easy. “The Eagle” overwhelmed his opponent with takedowns and pressure from the outset of the bout, gradually wearing Poirier down until he secured the rear-naked choke submission at the 2:06 mark of Round 3. The reigning lightweight champion’s winning streak is now at 12, which ties him with Tony Ferguson for the sixth-longest winning streak in UFC history. Nurmagomedov’s long-anticipated date with Ferguson remains cursed, as their headlining bout at UFC 249 was scrapped after the Dagestani fighter was stranded in Russia due to travel restrictions designed to combat the coronavirus pandemic.

The competition is catching up to Jones, but it hasn’t surpassed him just yet. “Bones” survived by the skin of his teeth at UFC 247, as he edged Dominick Reyes in a unanimous verdict in the evening’s headliner at the Toyota Center in Houston. In a fight that many observers scored in favor of Reyes, Jones was able to sway the judges’ scorecards with consistent forward pressure and a strong push in the championship rounds. The hard-fought triumph gives Jones 14 victories in championship fights, the most in the history of the Las Vegas-based promotion. Each fight seems to be getting more difficult, so the future could be very interesting for the Jackson-Wink standout.

Cejudo became only the second fighter to successfully defend titles in two divisions at UFC 249 when he defeated Dominick Cruz via second-round technical knockout in the evening’s co-main event at VyStar Veteran’s Memorial Arena in Jacksonville, Florida. After the victory, the Olympic gold medalist made a surprising retirement announcement, citing a desire to start a family. Retirements often don’t last in MMA, but if it holds up, “Triple C” ends his career with a six-fight winning streak that includes triumphs over Demetrious Johnson, T.J. Dillashaw, Marlon Moraes and Cruz.

Down on the scorecards after three rounds, Miocic showed the ability to adjust at UFC 241, as he attacked Daniel Cormier’s body to set up a fourth-round technical knockout victory in their rematch in Anaheim, Calif. Not only was it a nice rebound from his KO loss to “DC” in their first meeting at UFC 226, but it refocused talks on Miocic as potentially the greatest heavyweight of all-time. The Ohio-based firefighter now owns five victories in UFC title bouts, the second most in the history of the heavyweight division. The promotion is planning on booking a trilogy bout between Miocic and Cormier, but it likely won’t occur fall 2020 at the earliest.

For three rounds, Cormier waded forward with total disregard for Stipe Miocic’s power in the UFC 241 headliner. That approach ultimately failed him in the fourth stanza, however, as Miocic began to dig to the body. Those blows gradually accumulated until Miocic was able to hurt “DC” and flurry for the finish at the 4:09 mark of the period. UFC president Dana White revealed that the promotion is planning on booking a trilogy fight between Cormier and Miocic, but that bout likely won’t happen until fall 2020.

Usman endured a challenging first title defense, as he battled Colby Covington for nearly five rounds before earning a technical knockout victory at the 4:10 mark of the fifth round in the UFC 245 main event at the T-Mobile Arena in Las Vegas. Usman survived Covington’s high output early and gradually asserted himself as the bout wore on thanks to solid body work and harder strikes overall. “The Nigerian Nightmare” has begun his UFC tenure with 11 consecutive victories, and the latest was his most difficult to date. Usman has been linked to a matchup with the red-hot Jorge Masvidal for his next title defense.

There was some sentiment that Poirier possessed the necessary tools to defeat Khabib Nurmagomedov heading into their title unification bout at UFC 242. However, once the opening bell rung, it was all Nurmagomedov right up until “The Eagle” applied a fight-ending rear-naked choke at the 2:06 mark of Round 3. For Poirier, positive moments were few and far between — a couple solid punches on the feet and a Hail Mary guillotine attempt — but ultimately the American Top Team representative could do little to halt the momentum of his opponent as a six-bout unbeaten streak came to an end.