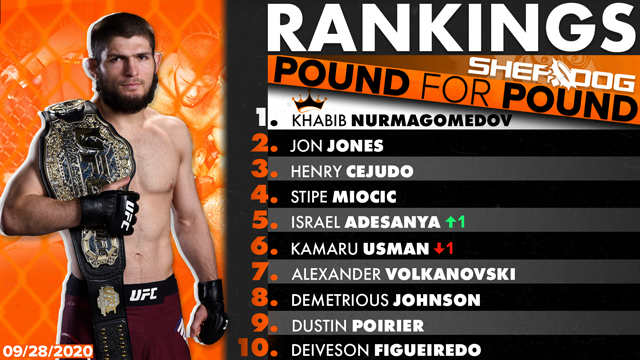 
It only took one fight for Israel Adesanya to go from “The Next Big Thing” to underappreciated. At UFC 253, he reminded all the doubters how talented he really is.

“The Last Stylebender” rebounded from a forgettable bout against Yoel Romero in March to post a nearly flawless second-round technical knockout victory over Paulo Costa in Saturday’s headliner on Yas Island in Abu Dhabi. Simply put, Adesanya took a matchup that seemed destined for “Fight of the Year” candidacy and turned it into his personal showcase.

Adesanya still has some work to do before he can match the legacy of the legendary Anderson Silva in the middleweight division, but such a clean performance is enough for him to climb to No. 5 in Sherdog.com’s latest pound-for-pound rankings – one spot ahead of fellow Nigerian standout Kamaru Usman.

Nurmagomedov needed less than 15 minutes to dispatch Dustin Poirier at UFC 242, and he made it look astonishingly easy. “The Eagle” overwhelmed his opponent with takedowns and pressure from the outset of the bout, gradually wearing Poirier down until he secured the rear-naked choke submission at the 2:06 mark of Round 3. Nurmagomedov’s long-anticipated date with Tony Ferguson remains cursed, as their headlining bout at UFC 249 was scrapped after the Dagestani fighter was stranded in Russia due to travel restrictions designed to combat the coronavirus pandemic. Nurmagomedov is expected to face new interim king Justin Gaethje at UFC 254 on Oct. 24.

Miocic closed the book on his rivalry with Daniel Cormier in the UFC 252 headliner, earning a unanimous decision triumph to retain his heavyweight title at the UFC Apex in Las Vegas on Aug. 15. In addition to taking two of three from Cormier in what was a memorable trilogy, Miocic’s sixth victory in a heavyweight championship bout tied him with Randy Couture for the most in the history of the division. The Ohio-based firefighter, who also holds the record for most consecutive heavyweight title defenses, is now at or near the top of any GOAT debate in his weight class. A rematch with Francis Ngannou could be on the horizon, while former light heavyweight champion Jon Jones also looms large.

If a lackluster showing against Yoel Romero at UFC 248 took some of the shine off Adesanya’s star, the City Kickboxing product restored all that was lost and then some with a dominant showing against the previously undefeated Paulo Costa at UFC 253. “The Last Stylebender” was rarely threatened as he befuddled his powerfully built opponent with crisp striking and precise movement, winning by technical knockout in the second stanza of their headlining encounter on Yas Island in Abu Dhabi on Sept. 26. Adesanya is moving closer to cleaning out the division but has targeted Jared Cannonier next, provided he defeats Robert Whittaker at UFC 254.

Usman continued to roll through the welterweight division at UFC 251, taking a dominant unanimous verdict over short-notice foe Jorge Masvidal in the evening’s headliner at Yas Island in Abu Dhabi. While “The Nigerian Nightmare” wasn’t especially exciting, he was undeniably effective in throttling his opponent through clinch work, pressure and takedowns. Usman has now won 12 consecutive fights at 170 pounds, tying him with Georges St. Pierre for the longest winning streak in the history of the division. Usman is expected to make his next title defense against Gilbert Burns at UFC 256 on Dec. 12.

Coming off a disappointing loss to Khabib Nurmagomedov in a 155-pound title bout at UFC 242 last September, Poirier displayed his championship mettle against Dan Hooker in the UFC on ESPN 12 main event. “The Diamond” dropped the first two rounds to his Kiwi opponent before picking up the pace down the stretch to earn a thoroughly entertaining unanimous decision at the UFC Apex in Las Vegas. Poirier has won five of his last six Octagon appearances and remains a dangerous force at the top of the division. An attempt to book Poirier against Tony Ferguson at UFC 254 ultimately fell flat at the negotiating table.

With no issues on the scale this time around, Figueiredo claimed the vacant flyweight crown with a first-round submission of Joseph Benavidez in the UFC Fight Night 172 headliner on July 18. Now a dominant 2-0 against the sport’s longtime No. 2 at 125 pounds, Figueiredo looks like a formidable champion. The 32-year-old Brazilian has won eight of his nine Octagon appearances since joining the promotion in 2017. Figueiredo’s first task as champion will be a defense against former 135-pound king Cody Garbrandt at UFC 255 on Nov. 21.