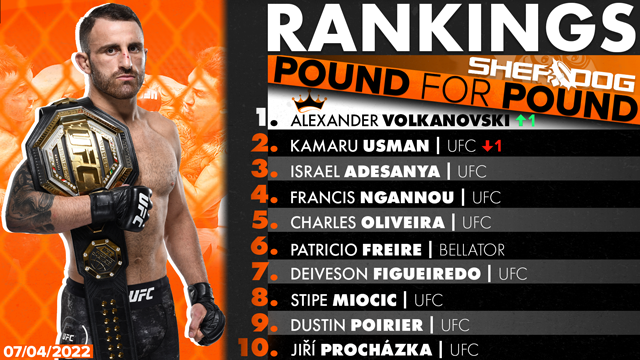 
Please welcome Alexander Volkanovski to the top of the pound-for-pound rankings.


Advertisement
By emphatically ending his trilogy with Max Holloway, a man previously regarded by some as the greatest featherweight of all-time, with a lopsided unanimous decision victory in the UFC 276 co-main event, Volkanovski has a legitimate claim to being the best fighter in the sport right now. At the very least, a 3-0 mark against Holloway, a 12-fight run in his division and a 22-bout winning streak overall are enough to overtake previous No. 1 Kamaru Usman in Sherdog’s latest pound-for-pound poll. It’s a debate that figures to continue for the weeks and months to come, and Usman will have the next chance to make a statement in his favor when he faces Leon Edwards in the UFC 278 headliner on Aug. 20.

Volkanovski, meanwhile, has even bigger dreams. After vanquishing Holloway for a third time, the City Kickboxing standout reiterated his desire to test his mettle at 155 pounds. If Volkanovski can capture gold in another weight class, it would solidify his legacy as an all-time pound-for-pound great.

Volkanovski was virtually flawless in his championship trilogy bout against Max Holloway at UFC 276, sweeping the scorecards by identical 50-45 counts in a lopsided unanimous decision triumph. The City Kickboxing stalwart has won 12 straight in UFC competition and a whopping 22 in a row overall, clearly establishing him as one of the top pound-for-pound talents in the sport. His rivalry with Holloway now clearly in the rearview mirror, Volkanovski has set his sights on a move to 155 pounds and two-division dominance.

Usman kept on trucking at UFC 268, earning a unanimous decision triumph over Colby Covington in a championship rematch at Madison Square Garden in New York on Nov. 6. “The Nigerian Nightmare” dropped Covington twice in the second round then survived a late push in the championship frames from his opponent to close the book on his rivalry with the controversial Covington. Usman now has 15 consecutive UFC triumphs under his belt, a streak that is only surpassed by middleweight great Anderson Silva. Usman’s next title defense will come against Leon Edwards in the UFC 278 main event on Aug. 20.

Adesanya was methodical and technical in his latest title defense, a five-round verdict over Jared Cannonier in the UFC 276 headliner, but it wasn’t the type of performance that’s going to make the Nigerian-born Kiwi appointment viewing. Adesanya’s 12-fight winning streak is the second-longest in 185-pound history, but it may take something spectacular to regain favor with the masses. It appears he’ll have that opportunity in a future championship clash with former kickboxing rival Alex Pereira.

After missing weight by 0.5 pounds one day prior, Oliveira lost his lightweight crown as soon as his UFC 274 headlining bout against Justin Gaethje began. That didn’t prevent “Do Bronx” from putting together yet another masterful performance, as he survived some early adversity before rallying to drop and submit the former World Series of Fighting champion in the opening round of their bout at Footprint Arena in Phoenix, Ariz. The victory, which was Oliveira’s 11th straight, assures the Brazilian of a spot in the next 155-pound title fight. The Chute Boxe Diego Lima representative only seems to be getting better, with finishes of Gaethje, Dustin Poirier and Michael Chandler in his last three promotional appearances.

“Pitbull” earned arguably the most important win of his storied career on April 15, defeating A.J. McKee by unanimous decision in the main event of Bellator 277 to take back his featherweight belt. With the hard-fought rematch behind him, Bellator’s first ever four-time champion should have plenty to keep him busy, including a potential rubber match with McKee — even if it takes place at lightweight — and rising contenders like Adam Borics and Aaron Pico stringing together impressive win streaks.

After relocating to Fight Ready in Arizona, Figueiredo evened the score with Brandon Moreno at UFC 270, winning a closely contested unanimous decision in the evening’s co-main event at the Honda Center in Anaheim, Calif., on Jan. 22. In a bout where each round was difficult to score, Figueiredo’s more powerful offense might have made the difference and allowed him to regain the UFC flyweight crown. With the series against Moreno knotted up at 1-1-1, a fourth bout seems well within the realm of possibility. First, Moreno and Kai Kara France will square off for interim gold at UFC 277.

When his wrestling failed against Francis Ngannou in the UFC 260 headliner, so did Miocic’s bid to make another successful heavyweight championship defense. Miocic saw his reign end in a second-round KO defeat at the UFC Apex in Las Vegas on March 27, but that doesn’t change the fact that the Ohio-based firefighter has already established himself as the organization’s most consistent heavyweight king with records for most victories in title bouts and consecutive title defenses. Miocic’s Octagon forays have become less frequent in recent years, though UFC president Dana White piqued the MMA community’s interest when he hinted at a potential meeting with Jon Jones. A date for that bout remains unknown, however.

There were more than a few times when Prochazka appeared to be dead in the water against Glover Teixeira in their light heavyweight title bout at UFC 275, but ultimately the resilient Czech prevailed with a rear-naked choke submission at the 4:32 mark of Round 5. Had the bout gone to the scorecards, Prochazka would have likely been on the wrong end of a decision defeat. Instead, the former Rizin Fighting Federation titlist claims 205-pound gold and extends his professional winning streak to 13. “Denisa” has also finished his last 11 opponents inside the distance.