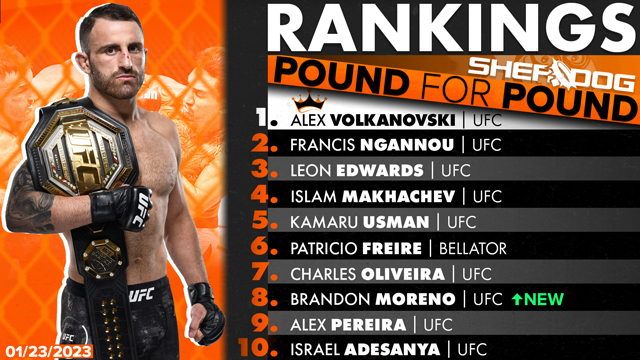 
Brandon Moreno got some much-needed closure at UFC 283.


Advertisement
The Mexican standout capped off his tetralogy against Deiveson Figueiredo with a doctor stoppage victory prior to the fourth round of Saturday’s co-main event in Rio de Janeiro. While the ending was somewhat anticlimactic, Moreno appeared to be pulling away on the scorecards before one of his punches caused Figueiredo’s right eye to swell completely shut and bring an end to the contest. With the victory, “The Assassin Baby” reclaims the flyweight belt and improves to 2-1-1 against Figueiredo, who announced his plans to move to bantamweight shortly after the bout. As a result, Moreno rejoins the pound-for-pound poll at No. 8, while Figueiredo falls to No. 15.

Volkanovski was virtually flawless in his championship trilogy bout against Max Holloway at UFC 276, sweeping the scorecards by identical 50-45 counts in a lopsided unanimous decision triumph. The City Kickboxing stalwart has won 12 straight in UFC competition and a whopping 22 in a row overall, clearly establishing him as one of the top pound-for-pound talents in the sport. His rivalry with Holloway now clearly in the rearview mirror, Volkanovski has set his sights on a move to 155 pounds and two-division dominance. He’ll get a chance to complete that vision when he faces Islam Makhachev at UFC 284.

Ngannou displayed a significant step in his evolution at UFC 270, as he relied on takedowns and positional control to grind out a unanimous decision win over Ciryl Gane to unify the heavyweight title at the Honda Center in Anaheim, Calif. While it wasn’t the most thrilling performance, the effort speaks volumes about Ngannou’s resolve, when in previous fights he struggled to do anything of note when forced to go past the second round. After being sidelined for the remainder of 2022 due to knee surgery, Ngannou was unable to come to terms with the UFC for a deal to defend his heavyweight crown against Jon Jones. As a result, he was stripped of his belt and granted his release, making him one of the most coveted free agents in combat sports.

Edwards is living proof that a fight is never over until the final bell sounds. “Rocky” was well behind on the scorecards against Kamaru Usman with time winding down in the fifth round of their headlining bout at UFC 278 when he unleashed a head kick knockout that will go down in history. Edwards, who endured some hard luck at the outset of the COVID-19 pandemic, will carry an 11-fight unbeaten streak into his first 170-pound title defense. Edwards will attempt to prove that his most recent victory was no fluke in a trilogy bout against “The Nigerian Nightmare” at UFC 286 in London.

If there were any doubts regarding Makhachev’s championship worthiness prior to UFC 280, there aren’t any now. Makhachev outclassed Charles Oliveira on the feet and on the ground en route to a second-round submission victory to claim lightweight gold at Etihad Arena in Abu Dhabi, carrying on a legacy started by retired ex-champ and coach Khabib Nurmagomedov. Now the owner of an 11-fight winning streak at 155 pounds, Makhachev can look forward to a first title defense against reigning featherweight king Alexander Volkanovski at UFC 284 in Perth, Australia.

In MMA, all good things must come to an end, and that includes Usman’s 15-fight UFC winning streak. “The Nigerian Nightmare” was well on his way to a clear-cut unanimous decision triumph over Leon Edwards in the UFC 278 main event when his opponent shocked the world with a head-kick knockout late in the fifth round. Usman will get a chance for redemption when he faces Edwards in a championship trilogy bout at UFC 286 in London.

Freire was methodical in victory against Kleber Koike Erbst at Rizin 40, as he denied his foe’s takedown attempts and landed solid offense on the feet en route to a unanimous decision triumph against the Japanese promotion’s featherweight champion on New Year’s Eve. “Pitbull,” who is currently on his third reign as Bellator’s 145-pound king, has won 10 of his last 11 professional appearances dating back to 2017. A potential trilogy against A.J. McKee, the only man to defeat him during that time, looms large in the coming year.

Oliveira entered UFC 280 with the confidence of someone on an 11-fight winning streak, but in the end he simply had no answers for Islam Makhachev. The Brazilian was outgunned on the feet and outgrappled on the canvas en route to a second-round submission loss in the evening’s main event at Etihad Arena in Abu Dhabi on Oct. 22. The setback doesn’t diminish all that Oliveira has accomplished, most notably a complete turnaround from a middling featherweight to one of the top talents in the sport at 155 pounds. The defeat didn’t dampen his resolve, as “do Bronx” was already plotting his climb back to the top in the fight’s immediate aftermath.

Moreno got the last laugh against Deiveson Figueiredo, as he improved to 2-1-1 against the Brazilian with a doctor stoppage victory at UFC 283 in Rio de Janeiro. Moreno now begins his second reign as flyweight champion with the Figueiredo rivalry clearly in his rearview mirror. It seems quite likely that Alexandre Pantoja — who owns wins over Moreno at UFC Fight Night 129 and on “TUF 24” — will be next on the fight itinerary for “The Assassin Baby.”

Pereira maintained his combat sports mastery over Israel Adesanya in the UFC 281 headliner, rallying for a scintillating fifth-round technical knockout victory at Madison Square Garden. It’s an improbable rise to the top of the middleweight division for “Poatan,” who becomes champion in just his fourth UFC appearance. As deadly as is striking appears to be, Pereira’s lack of wrestling acumen means that he’ll have plenty of challengers lining up to take his title. Whether any of them will be able to withstand his standup arsenal remains to be seen.

Adesanya appeared to be on his way to a decision victory against Alex Pereira in the UFC 281 headliner, but the Brazilian put the pressure on in Round 5, swarming with power punches en route to a technical knockout victory. Not only does “The Last Stylebender” fall to 0-3 against Pereira in combat sports — including a pair of losses in kickboxing — but he also suffers his first middleweight defeat as a professional mixed martial artist. Given his dominance over the rest of the division, an immediate rematch with Pereira is certainly within the realm of possibility.