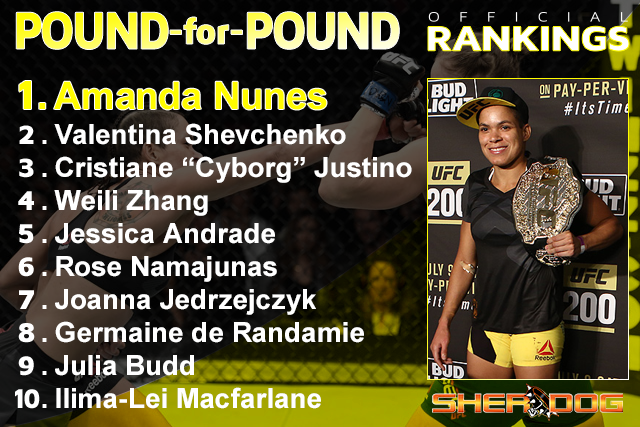 
Sign up for ESPN+ right here, and you can then stream UFC on ESPN+ live on your computer, phone, tablet or streaming device via the ESPN app.

It was a vintage performance for Joanna Jedrzejczyk at UFC Fight Night 161 in Tampa, Fla., on Saturday night.

The weigh-in scare that dominated discussion in the days leading up to her headlining bout with Michelle Waterson proved to be unfounded, as Jedrzejczyk hit her mark on the scale and proceeded to dominate “The Karate Hottie” for five rounds. The Polish star not only rebounded from a loss to Valentina Shevchenko in a flyweight title bid this past December, but she re-established herself as a serious championship contender at strawweight with her second consecutive 115-pound triumph.

Once regarded as perhaps the top female pound-for-pound talent in the sport, Jedrzejczyk has some work to do if she is ever to reach those heights again. Nonetheless, she remains more than deserving of a spot in our latest pound-for-pound poll, where she stands pat at No. 7.

It was far from enthralling, but Shevchenko was in completely control throughout her title defense against Liz Carmouche in the UFC Uruguay headliner. Even though her volume was lacking, a technical “Bullet” floored her opponent twice and did well in grappling exchanges with the physical Carmouche. The end result was a sweep of the scorecards and the fourth consecutive 125-pound victory for the reigning champion. The 31-year-old Tiger Muay Thai representative now owns victories over Carmouche, Jessica Eye and Joanna Jedrzejczyk in title bouts and continues to look like one of the most dominant champions in any UFC division.

Zhang was devastating on her home soil, putting an end to Jessica Andrade’s title reign in just 42 seconds at UFC Fight Night 157 in Shenzhen, China. “Magnum” pummeled Andrade with punches, elbows and knees at close range for a surprisingly quick finish to become the first Chinese champion in UFC history. Zhang’s professional winning streak is now at 20, a run that includes four victories in the Octagon. While the 30-year-old Black Tiger Fight Club member figures to be a valuable asset as the promotion continues to make inroads in China, she also showed she may just be scratching the surface of her potential by dispatching one of the most powerful women in the division. Zhang is expected to compete in the United States for her next title defense, but assuming her progression continues, a pay-per-view headlining spot in China is a realistic goal in the future.

After a false alarm involving a weight-cut scare earlier in the week, Jedrzejczyk was her usual dominant self come fight night at UFC Tampa, cruising to a unanimous verdict against a game Michelle Waterson on Oct. 12. Whether it was with crisp combinations and leg kicks at range or knees and elbows in the clinch, the Polish star was in top form in earning her second consecutive triumph at 115 pounds. Given her pedigree, Jedrzejczyk is already on the short list of top contneders for newly-crowned strawweight queen Weili Zhang.

Macfarlane had her hands full with Veta Arteaga at Bellator 220, but a powerful elbow from top position in third round quickly changed the course of the fight. The blow opened up a massive cut on Arteaga’s forehead, and moments later, a doctor entered the cage to halt the contest to give Macfarlane her third successful title defense. In her post-fight interview, “The Ilimanator” expressed a desire to give Arteaga an immediate rematch due to the nature of the stoppage. Regardless of what lies ahead, Macfarlane remains one of the brightest rising stars in the California-based promotion.