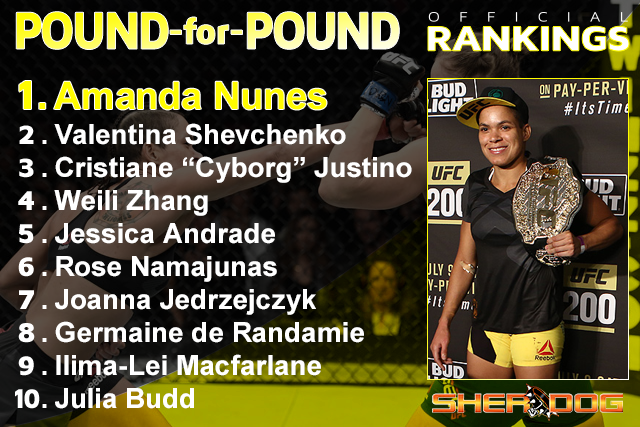 No matter where Cristiane Justino has gone, she has displayed a knack for bringing home championship hardware.

“Cyborg” brought her usual brand of violence to the Bellator 238 headliner on Saturday night, capturing the featherweight crown with a fourth-round stoppage of Julia Budd at the Forum in Inglewood, Calif. The Brazilian can add the Bellator belt to a trophy case that already includes titles from the UFC, Invicta FC and Strikeforce. While Justino was impressive in halting Budd’s 11-bout winning streak, she remains entrenched at No. 3 in our latest pound-for-pound poll behind Amanda Nunes – the last person to beat her – and UFC flyweight queen Valentina Shevchenko.

Budd, meanwhile, falls one spot to 10th behind Bellator flyweight queen Ilima-Lei Macfarlane, who has yet to taste defeat in 11 professional appearances.

In other recent action, Seo Hee Ham vanquished Ayaka Hamasaki on Year’s Eve to claim the No. 12 spot on the bubble. Hamasaki falls one spot to 13, while Holly Holm, who took a grinding verdict over Raquel Pennington, also falls one place to 14th.

It was far from enthralling, but Shevchenko was in completely control throughout her title defense against Liz Carmouche in the UFC Uruguay headliner. Even though her volume was lacking, a technical “Bullet” clipped her foe on a couple occasions and held her own in grappling with the physical Carmouche. The end result was a sweep of the scorecards and the fourth consecutive 125-pound victory for the reigning champion. The 31-year-old Tiger Muay Thai representative now owns victories over Carmouche, Jessica Eye and Joanna Jedrzejczyk in title bouts and continues to look like one of the most dominant champions in any UFC division. Shevchenko will make her next title defense against Katlyn Chookagian at UFC 247 in Houston.

Andrade’s championship reign proved to be short lived – one of the shortest in UFC history, in fact – as she suffered a 42-second technical knockout loss to Weili Zhang in the UFC Fight Night 157 headliner in Shenzhen, China on Aug. 31. The Brazilian’s willingness to engage ultimately cost her when Zhang clipped her with a right hook and unloaded with knees, elbows and punches in close quarters for a surprisingly quick finish. That ends a four-bout winning streak for “Bate Estaca,” who was coming off consecutive knockout wins over Rose Namajunas and Karolina Kowalkiewicz. Andrade will face Namajunas in a rematch at UFC 249.

Namajunas looked sharp in her second title defense at UFC 237. That is, until challenger Jessica Andrade knocked her unconscious with a slam 2:58 into the second round of their headlining bout in Rio de Janeiro. Namajunas’ reaction after the defeat was one of relief, and it seemed as though the 26-year-old was leaning toward an early retirement. After taking some time off, Namajunas has elected against calling it a career will return to the Octagon in a rematch with Andrade at UFC 249 on April 18.