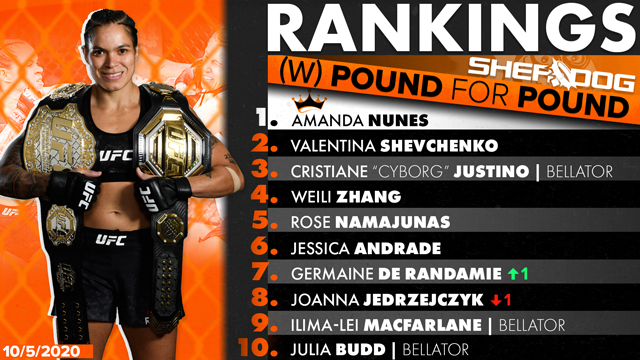 The 36-year-old kickboxing specialist earned the first submission victory of her professional MMA career at UFC on ESPN 16, when she choked Julianna Pena unconscious in the third round of their bantamweight encounter at Flash Forum in Abu Dhabi. With two losses to Amanda Nunes on her resume, it may be difficult for “The Iron Lady” to get another title shot as long as the Brazilian is champion, but de Randamie nonetheless represents a formidable challenge for most any woman at 135 or 145 pounds.

De Randamie has won six of her last seven UFC appearances, a run successful enough to elevate her ahead of ex-strawweight queen Joanna Jedrzejczyk to No. 7 in Sherdog.com's latest female pound-for-pound rankings.

Nunes was completely dominant against Felicia Spencer in the UFC 250 headliner, winning a lopsided unanimous verdict that wasn’t as close as the judges’ scorecards (50-44, 50-44, 50-45) indicated. That makes 11 consecutive triumphs for Nunes, who joins Daniel Cormier and Henry Cejudo as the only two UFC fighters two successfully defend titles in two different weight classes. Retirement talks proved to be premature for “Lioness,” who will return for a another 145-pound title defense against Megan Anderson at UFC 256 on Dec. 12.

Shevchenko continues to look unstoppable in the UFC women’s flyweight division. “Bullet” absolutely overwhelmed Katlyn Chookagian in the UFC 247 co-main event in Houston, eventually trapping her opponent in a mounted crucifix and raining down strikes for a technical knockout stoppage at the 1:03 mark of the third round. Shevchenko has won five straight since dropping a closely-contested split verdict to Amanda Nunes at UFC 215. Her next title defense is will come against Jennifer Maia at UFC 255 on Nov. 21.

Justino looked quite comfortable in her new home, as she overwhelmed Julia Budd for a fourth-round technical knockout victory in the Bellator 238 headliner at the Forum in Inglewood, Calif., on Jan. 25. The victory gives “Cyborg” championships in four major organizations over the course of her career – Bellator, UFC, Invicta FC and Strikeforce – and re-affirms her position as one of the greatest female mixed martial artists of all time. The heavy-handed Brazilian will next defend her crown against Arlene Blencowe at Bellator 249..

Andrade struggled to solve the Rose Namajunas puzzle for two rounds at UFC 251, but “Bate Estaca” made things interesting with a rally in the third round of their strawweight rematch in Abu Dhabi. Unfortunately for Andrade it wasn’t enough, as the Brazilian dropped a split decision to Namajunas in contest that earned “Fight of the Night” honors. After winning seven of eight UFC appearances June 2016 to May 2019, the Brazilian has dropped back-to-back fights in the Octagon. Andrade will try her hand at 125 pounds when she meets Katlyn Chookagian at a UFC event on Oct. 17..