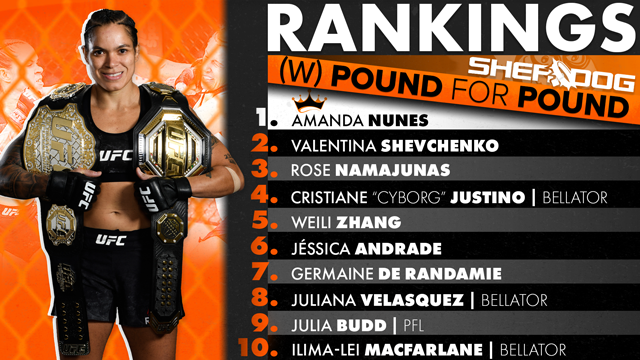 
She took an entirely different route to get there this time around, but Rose Namajunas is now 2-0 against Weili Zhang.

“Thug Rose” relied on her grappling and top control down the stretch to eke out a split-decision triumph over Zhang in the UFC 268 co-main event at Madison Square Garden in New York on Saturday night. It wasn’t nearly as emphatic as her first victory over the Chinese standout, when she won via head-kick KO in 78 seconds at UFC 261 in April, but achieving victory by different means is often the sign of a champion with staying power. While Namajunas is entering the conversation as perhaps the top strawweight of all-time, she remains firmly behind Amanda Nunes and Valentina Shevchenko in Sherdog’s female pound-for-pound rankings at No. 3.

After a shockingly quick head-kick KO victory over Weili Zhang in their first meeting at UFC 261, Namajunas relied on a different approach in the rematch, relying on her takedowns and grappling down the stretch for a split-decision triumph in the UFC 268 co-headliner at Madison Square Garden in New York on Nov. 6. With the win, the reigning strawweight queen improved to 4-0 in rematches during her UFC tenure. Another return date against inaugural 115-pound champion Carla Esparza could be on the horizon for Namajunas, who fell to “Cookie Monster” at “The Ultimate Fighter 20” finale in December 2014..

It took a little bit longer the second time around, but the result was otherwise the same, as Justino defended her featherweight crown with a fifth-round technical knockout of Leslie Smith in the Bellator 259 headliner at Mohegan Sun Arena in Uncasville, Conn. “Cyborg” previously dispatched Smith via first-round TKO in her Octagon debut at UFC 198 in May 2016. The 35-year-old Chute Boxe representative has won four straight bouts – three in Bellator – since her upset loss to Amanda Nunes at UFC 232 in December 2018. Justino’s next title defense will come against Sinead Kavanagh at Bellator 271.

Andrade was in peak form at UFC 266, as she walked Cynthia Calvillo down and landed power punches until her opponent was unable to defend against the Brazilian’s onslaught at the 4:54 mark of Round 1 at the T-Mobile Arena in Las Vegas on Sept. 25. The former strawweight champion bounces back from a TKO loss to reigning 125-pound champ Valentina Shevchenko at UFC 261 while winning for the second time in three Octagon appearances since moving up to flyweight. Andrade currently ranks second in UFC women’s history in wins (13) and finishes (seven).

« Previous Fight Facts: UFC 268 Next Michael Chandler: ‘We Made Some Questionable Decisions’ in UFC 268 Loss to Justin Gaethje »