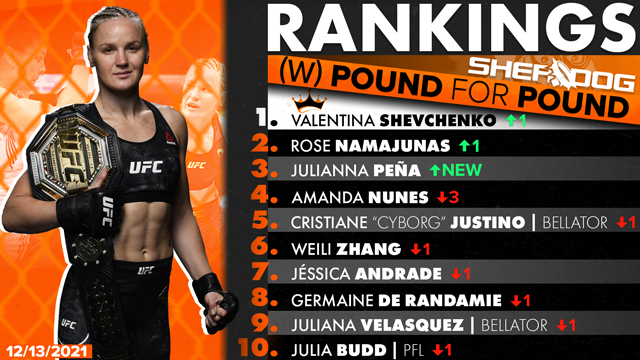 
Julianna Pena lived up to her vow to shock the world.

Pena’s submission of Amanda Nunes in the UFC 269 co-main event is not only an “Upset of the Year” candidate for 2021, but perhaps one of the greatest shockers in the history of the sport. Pena has been through a lot in her UFC tenure to get to this point: a serious knee injury, an extended hiatus to become a mother and losses in two of three bouts from 2017 to 2020. Now, she owns a finish over an opponent widely regarded as the female GOAT.

Pena’s emergence makes for an interesting situation in Sherdog’s latest pound-for-pound rankings. Valentina Shevchenko has been the most dominant female in MMA the past few years, so despite a pair of losses to Nunes (the last one coming in 2017), she ascends to the top spot. Rose Namajunas, with five solid pound-for-pound triumphs to her credit in recent years – including an avenged defeat against Jessica Andrade – moves to No. 2. Pena checks in at an unlikely No. 3, while Nunes falls from first to fourth.

Perhaps an immediate rematch will be in store, giving Pena a chance to further solidify her status, or for Nunes to regain the status quo. For now, though, it’s a moment meant to allow us to celebrate the beautiful unpredictability of MMA.

Pena entered UFC 269 as a massive underdog, and she exited the event with the biggest upset of 2021 along with the bantamweight title in tow. A tenacious Pena survived a slugfest with Amanda Nunes and when her Brazilian foe fatigued, “The Venezuelan Vixen” capitalized with a takedown and rear-naked choke submission. Pena, who is victorious in seven of nine Octagon appearances, could be in line to face Nunes in an immediate rematch — but the 135-pound division appears to be more wide open that it has been in years.

Nunes was a victim of 2021’s biggest upset at UFC 269, as she suffered a second-round submission loss to Julianna Pena in the evening’s co-main event at the T-Mobile Arena in Las Vegas. Nunes emptied her gas tank in a firefight against “The Venezuelan Vixen” in Round 2, and once she was unable to get the knockout, she succumbed to a rear-naked choke to relinquish the bantamweight belt. Considering she entered the bout with the unofficial title of women’s GOAT, an immediate rematch with Pena is a realistic possibility unless Nunes elects to defend her 145-pound title next.