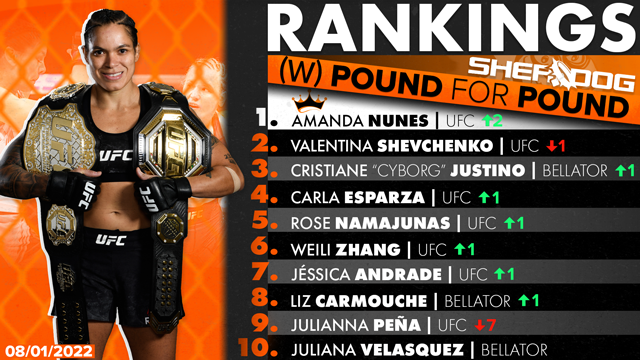 “Lioness” regained her bantamweight crown with a dominant unanimous decision triumph against Julianna Pena in Saturday’s headliner at American Airlines Arena in Dallas. Not only did Nunes rebound from her shocking upset loss to “The Venezuelan Vixen” at UFC 269 late last year, but the victory was convincing enough that a trilogy doesn’t feel absolutely necessary.


Advertisement
Regardless of what the future holds for the two-division queen, Nunes’ performance allows her to regain the top spot in Sherdog’s female pound-for-pound rankings, because she still owns a pair of head-to-head triumphs against flyweight queen — and former No. 1 — Valentina Shevchenko. Pena, meanwhile, takes a serious tumble, falling all the way to No. 9 in the poll. While the upset win over Nunes was a career-defining moment, Pena’s overall resume doesn’t measure up to much of the rest of the competition in the Top 10.

It took a little bit longer than their first meeting, but “Cyborg” nonetheless improved to 2-0 against Arlene Blencowe with a unanimous decision triumph in the Bellator 279 main event at Neil S. Blaisdell Arena in Honolulu, Hawaii, on April 23. The reigning featherweight queen has won six straight since her shocking loss to Amanda Nunes in December 2018 and still looks to be head and shoulders above the 145-pound field in Bellator. A potential cross-promotion with, say, the PFL for a superfight with Kayla Harrison would be quite intriguing, however. Whether that’s realistic remains to be seen.

More than seven years after becoming the UFC’s inaugural strawweight title holder, Esparza can call her herself a champion again following a split-decision triumph over Rose Namajunas in the UFC 274 co-main event. It may have been one of the least compelling fights in recent memory but don’t tell that to Esparza, who has won six straight outings and is 2-0 against “Thug” Rose. To top it all off, “Cookie Monster” had a shiny belt to bring to her wedding, which took place one week after UFC 274.

Namajunas gave one of the most perplexing performances by a defending champion in recent memory, as she refused to engage for the majority of 25 minutes against Carla Esparza in a split decision loss in the UFC 274 co-main event. Though Esparza didn’t do much to force the issue, the “Cookie Monster” did just enough to get the nod from two cageside judges and improve to 2-0 against “Thug” Rose. In the aftermath, Namajunas was adamant that she did enough to deserve the victory, but after such a forgettable fight, it’s hard to envision the UFC being eager to book a trilogy anytime soon.

Zhang brought her rivalry with Joanna Jedrzejczyk to an emphatic close at UFC 275 by sending her opponent face-first to the canvas with a spinning back fist knockout in the second round. It was a sharp contrast to the five-round war between the two at UFC 248, which Zhang won via split decision, as “Magnum” was impressive even prior to the knockout, grounding Jedrzejczyk and attacking with punishing ground-and-pound. Most importantly for Zhang, the victory cements the former strawweight queen as the No. 1 contender, cementing a future showdown with current champion Carla Esparza at a later date.

After a three-bout stint at 125 pounds that saw her fail in a bid to capture championship gold against Valentina Shevchenko, Andrade made an impressive return to strawweight with a first-round submission of surging contender Amanda Lemos in the UFC Fight Night 205 main event on April 23. Not only did Andrade reassert herself as a person of interest in the division, but she also authored the first standing arm-triangle choke submission in the history of the Las Vegas-based promotion. Andrade was forced to withdraw from a flyweight clash against Manon Fiorot at UFC Paris.

When it comes to making good on championship opportunities, the third time was the charm for Carmouche, who came up short in title bouts against Ronda Rousey and Valentina Shevchenko before claiming flyweight gold with a stoppage of Juliana Velasquez in the Bellator 278 main event. The Team Hurricane Awesome product survived an early knockdown before taking Velasquez down and advancing to a mounted crucifix, where she hammered away with elbows to secure a technical knockout victory in the fourth round. Carmouche was likely behind on the scorecards before the controversial finish, which could mean a rematch could be in store sooner rather than later.

Velasquez appeared to be on the right track to victory through three rounds against Liz Carmouche in the Bellator 278 headliner, but that all changed when “Girl-Rilla” secured a mounted crucifix and rained down elbows to force a stoppage with 13 seconds remaining in the period. While Velasquez didn’t appear to be in danger from the strikes, her unblemished record is no longer, and she’ll have to wait and see if the controversial nature of the stoppage grants her an immediate rematch.