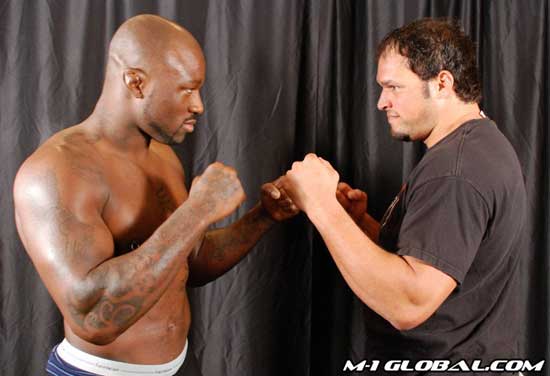 Lawal capitalized on a Kerr low kick and took the UFC and Pride veteran down, then used heavy right hands until Kerr lost consciousness, face down on the canvas.

Kerr absorbed a couple of extra shots after he was out that sent his mouthpiece flying across the ring. Kerr was unresponsive for a few worrisome moments, until he finally sat up and responded to the physicians.

Emelianenko, in full-gi attire, started off with a some nice throws that put the former Dream middleweight champion on that mat. Like clockwork, once the Russian had a moment of excellence, Mousasi had a reversal or sweep of his own to make the Kansas City crowd awe with excitement. Both men had their share of crowd-pleasing moves until the contest finally concluded.

Middleweight Karl Amoussou submitted John Doyle with a rear-naked choke 3:15 into the first round. An intense Amoussou started the contest with a chopping low kick that put the American on his knees, but Amoussou was then taken down. From his back, the Frenchman was aggressive and swept Doyle to take top position, then full mount before securing the finishing submission.

Lucio Linhares made short work of Mikhail Zayats, stopping the Russian with a rear-naked choke 1:00 into the first round. Linhares ate Zayats’ punches early, but wasn’t fazed. The Brazilian threw hard shots of his own that stunned the Team Red Devil fighter, dropping him to the floor. Smelling a finish, Linhares took the back of his opponent and forced the tapout.

Daisuke Nakamura earned a unanimous decision over Ferrid Kheder in the fight of the night. Kheder landed hard shots, but any offense he had was answered by a stiff left jab from Nakamura that left Kheder’s face and nose bloody. Nakamura coasted to a solid, yet competitive nod from the judges.