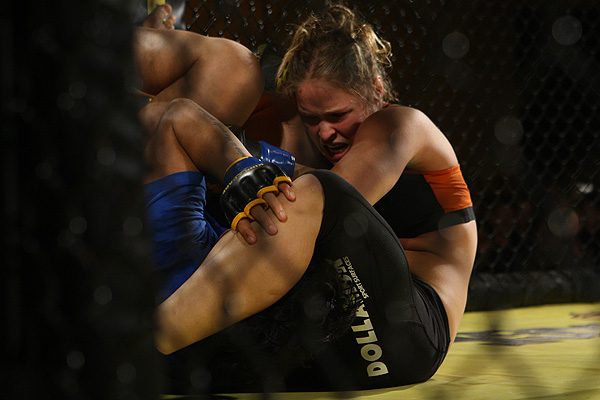 Five professional fights. Five first-round finishes. Five armbars. Those facts alone are enough for 93 percent of participants in Sherdog.com’s MMA Pick’Em fantasy game to put their faith in Ronda Rousey as she defends her Strikeforce women’s bantamweight title for the first time against Sarah Kaufman on Saturday at the Valley View Casino Center in San Diego.

Rousey has generated plenty of attention for her outspoken nature outside the cage, but it is her performance on fight night that really makes her stand out. The California native captured the 135-pound strap in March, submitting Miesha Tate with an armbar at 4:27 of the opening round. None of Rousey’s other four victims have managed to last more than 49 seconds against her.

Kaufman is a former bantamweight titlist who has tasted defeat only once under the Strikeforce banner -- a submission loss to Marloes Coenen in October 2010. In her most recent fight, the Zugec Ultimate Martial Arts representative earned a hard-fought majority decision over Alexis Davis at Strikeforce “Tate vs. Rousey.” Known for his polished standup, 10 of Kaufman’s 15 career victories have come by knockout or technical knockout.

The co-main event of Strikeforce “Rousey vs. Kaufman” pits former middleweight kingpin Ronaldo “Jacare” Souza against prospect Derek Brunson in a middleweight affair. The overwhelming majority of players (97 percent) have picked the Brazilian, who relinquished his belt to Luke Rockhold. He has fought once since, submitting Bristol Marunde with an arm-triangle choke in March.

Brunson suffered the first loss of his career to Kendall Grove at ShoFight 20, dropping a unanimous decision to the UFC veteran after taking the fight on just four days’ notice. Prior to that, the Jackson’s Mixed Martial Arts product had won three straight with Strikeforce, besting Jeremy Hamilton, Lumumba Sayers and Nate James in succession.

• A solid 70 percent of users like Tarec Saffiedine to defeat Roger Bowling in a welterweight showdown. Saffiedine has won two straight and five of six overall with the promotion. Perhaps best known for his trilogy with Bobby Voelker, Bowling has scored knockout victories over Jerron Peoples and Brandon Saling in his last two outings;

• Lumumba Sayers’ last two victories have come in a combined 2:02, and 70 percent of players like Sayers to keep his momentum going in middleweight clash against Anthony Smith. Smith, who owns 14 of his 16 career triumphs by knockout or submission, fell to Adlan Amagov in his last Strikeforce appearance;

• Former University of Tennessee linebacker Ovince St. Preux is favored by 94 percent of competitors in a light heavyweight clash with T.J. Cook. St. Preux saw a seven-fight winning streak come to an end against Gegard Mousasi in December, while Cook was submitted by Trevor Smith in November;