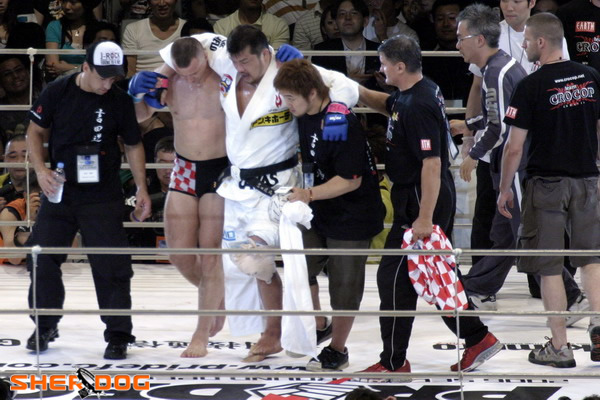 
Pride FC "Critical Countdown Absolute", which took place on July 1, 2006, featured the quarterfinals of Pride Fighting Championships’s 2006 open-weight grand prix. Despite the absence of heavyweight champion Fedor Emelianenko due to surgery on his chronically broken right hand, it was one of the stronger tournaments Pride ever put together. As was usually the case with Pride tournaments, the first round had served to weed out the curiosities, MMA dilettantes and the severely undersized—or oversized—and thus the eight men who met in Saitama Super Arena that night included some of the best fighters in the sport. For the record, the quarterfinals featured Antonio Rodrigo Nogueira, who advanced by defeating a still fairly green Fabricio Werdum; Josh Barnett, who made quick work of Mark Hunt on the ground; middleweight champ Wanderlei Silva, who replaced Emelianenko and soccer-kicked Kazuyuki Fujita half to death; and in the last quarterfinal of the evening, Mirko Filipovic and Hidehiko Yoshida.

“Cro Cop”-Yoshida was billed as a classic striker-versus-grappler matchup, but the truth was slightly more nuanced, as were the fighters. While Olympic gold medalist judoka Yoshida had always been a willing and competent striker, fearlessly going toe-to-toe with previous opponents like Silva, he was simply no match for the former K-1 star at the absolute height of his powers. Filipovic’s nearly impregnable takedown defense kept the fight standing—the one time the action hit the canvas, it was because he chose to follow his opponent there after a knockdown—and a steady diet of kicks to the outside of Yoshida’s leg quickly began to take their toll.

Once Yoshida began visibly limping, Filipovic tried a head kick and some punch combinations to finish the job, but in the end, the leg kicks were all it took. The final kick left Yoshida on the mat, grimacing in pain and unable to answer referee Yuji Shimada’s invitation to stand back up. The TKO win came at 7:38 of the first round, stamping the Croatian’s passport to Pride FC: Final Conflict Absolute, which would feature the semifinals and final in the same night and just happened to be scheduled for his 32nd birthday. It must have been some kind of sign.
« Previous This Day in MMA History: June 30 Next This Day in MMA History: July 2 »