One way to get James Toney to stop talking: cutting off the blood supply to his brain.

Randy Couture performed a textbook arm-triangle choke against the veteran boxer and 0-0 fighter Saturday, fulfilling the expectations (and wishes) of most in the audience. The wrestler dropped Toney’s chances from about five percent down to zero by performing a low single ankle pick takedown, eliminating any possibility Toney could counter with a short strike. On the mat, Couture drowned him. Aside from the night he debuted against two grunting pituitary cases in 1997, it was far and away the least dangerous fight of the 47-year-old’s 13-year career. (Considering Couture’s willingness to fight a killer in virtually every one of his 22 prior UFC bouts, the break was well-deserved.)

By the time the fight adds up pay-per-view households, DVD sales and Spike reruns, it will become the most-watched boxer vs. wrestler mixed-style match in history. (Ali/Inoki, whatever its audience numbered, is a nothing: The wrestler couldn’t wrestle.) While predictable, the bout and its result exemplified the cultural shift in how our culture defines tough in combat sports. The Boston crowd was chanting “UFC” like the promotion was the home team and Toney was wearing a Yankees jersey; in less than four minutes, the boxer was splayed out on the mat, emasculated.

While many can appreciate the technique of controlled violence, prizefighting has always been about finding out who the toughest guy in the room is. Boxing, while a beautiful art to watch at its highest level, can’t wave that flag any longer. We didn’t need Couture/Toney to tell us that, but it’s the most visible evidence yet that MMA might be supplanting it sooner than expected.

Next for Couture: Back to 205 and a flirtation with title contention. Bouts with Forrest Griffin or Rich Franklin would be more forgiving of his age than wading into Rashad Evans or Lyoto Machida territory.

Next for Toney: Cashing his paycheck, enjoying a break from his strict diet.

Next for Frankie Edgar: A rematch with Gray Maynard, who probably has Edgar’s number in the same way Edgar had B.J. Penn’s.

Next for Penn: Sulking; fights with Nate Diaz or a rematch with Takanori Gomi would let him play his game comfortably. 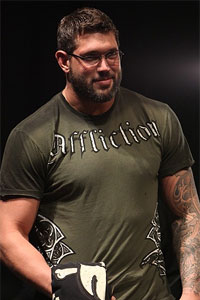 File Photo
Neil Melanson awarded Couture
a BJJ black belt at UFC 118.
The Subtle Joke Award: Randy Couture’s corner, for awarding him his black belt in jiu-jitsu after submitting James Toney, who only goes to the ground when he drops a sandwich.

The Money-Flusher Award: Nik Lentz, for his stifling wrestler’s performance against Andre Winner during Spike’s live prelim show. You can’t order a pay-per-view if you’re asleep.

The Shameless Hype Award: Dana White, for declaring Toney was in “great shape” during that same Spike special. Toney weighed 237 pounds, 20 more than he did for his last boxing match. Do you want to be an ultimate fighter? Move next to a Chinese buffet.

The Delayed-Reaction Award: B.J. Penn, for waiting until late in the fight to try and tackle Frankie Edgar -- this despite having at least 40 minutes of precedent to realize standing with him is a losing proposition.


Does boxing suffer along with James Toney?

Realistically, Toney represented only himself during Saturday’s losing effort against Randy Couture. But that isn’t going to stop audiences from offering their own conjecture about the applicability of boxing in the pursuit of being tough.

Toney didn’t help the case by repeatedly proclaiming himself the best and complaining that he was too durable to get any fights in boxing. If he’s to be believed, then a world-class puncher had no chance at all against a grappler nearly 50 years old. If Toney were controlled by Don King or other major boxing management, it’s doubtful he would’ve been allowed to participate. But he did, and his sport now has to deal with the videotape evidence that the best boxer can’t be considered the best fighter.

Can any boxer thrive in MMA?

Toney’s sluggish appearance may not have been convincing, but it’s not impossible for a striker to enter a mixed-style ring feeling formidable. Mirko "Cro Cop" Filipovic, a K-1-level kickboxer with no history of grappling, beat Japanese wrestler Kazuyuki Fujita by splitting his head open in Filipovic’s 2001 MMA debut; other strikers have learned enough to survive on the ground without getting twisted up. Most famously, Maurice Smith survived a beastly Mark Coleman in 1997 when most of the MMA media was busy composing his obituary.

Toney had it the worst, drawing the craftiest veteran in the sport on his first attempt. Styles make fights, and if the UFC was looking toward a Toney win, they’d have fed him a kickboxer of dubious takedown ability. It’s possible for Toney to win in this sport, but the matchmaker has to want it.

After eight years of the sport feeding his 155-pound ego, Penn has finally found his road block in Frankie Edgar, a high-volume headache too quick to hit and too talented to hold down. Penn had only sporadic success in 50 minutes of fighting: Unless Edgar drops the belt to Gray Maynard, the title now seems out of Penn’s reach.

The disappointment is obvious, but the question is whether Penn -- who once admitted he’d have retired if he had beaten Georges St. Pierre in their rematch -- will find renewed motivation or feel frozen at the idea he’s no longer the man to beat in the division.

Are wrestlers a boon or bust for MMA?

Of the current champions in five UFC weight divisions, three -- Frankie Edgar, Georges St. Pierre and Brock Lesnar -- are authorities on holding down opponents. At middleweight, Chael Sonnen came within inches of Anderson Silva’s title; Ben Askren and Joe Warren are running the table in Bellator; Gilbert Melendez controls opponents in Strikeforce. MMA was and remains a wrestler’s best chance at a second career.

At the highest levels, it can often be difficult to inflict damage on a squirming and evasive defending grappler, meaning that many of these bouts can turn into NCAA matches with about as much damage inflicted. Only Lesnar seems to be satisfying the audience’s desire for violence: The rest have to hope the crowd appreciates subtlety.

Creating excitement in these bouts would mean the controlling wrestler risks losing good position to look for more submissions or striking, a bitter prospect when winning means money and employment and dropping an exciting bout is still worse than winning a boring one. (The UFC, devoid of any ability to telegraph fights, tries to encourage recklessness by awarding finishing bonuses and off-radar locker room checks.) The fighters aren’t to blame: They’re operating under the rules. But in an era where control means titles, it might be beneficial to take another look at how much leeway the officials give grapplers content to deliver pestering strikes instead of finishing blows and fence-stacking instead of guard-passing.

Sports are entertainment. If they’re not entertaining, there’s a problem. If anything, Edgar and St. Pierre holding belts should be incentive enough to fold the WEC classes into the UFC and have a guaranteed fireworks display when it’s needed.


As many predicted, Nate Diaz and Marcus Davis had styles that clashed well enough for a $60,000 Fight of the Night bonus Saturday. The third-round guillotine was Davis’ first submission loss in the UFC…While James Toney proclaimed he was “no quitter” and “will be back” following the inevitable loss to Randy Couture, UFC President Dana White told media gathered after the event that his promotion was done with both Toney and the boxing crossovers. Toney essentially spoiled any public appetite for more, and it’s impossible to think a prime athlete like Manny Pacquiao would consent to a pay cut to get his arm snapped. Toney might get offers for the carnival circuit in Japan, but to his credit, he’s already dismissed any interest in that…White also said he’d have no problem selling the Frankie Edgar/Gray Maynard sequel for the title to the public. I’m not as convinced: Unlike other grapplers who take minimal chances, both men hardly ooze charisma…The post-fight conference was also notable for the announcement that an Asian Operations division would be opening shortly, with an eye on expanding the UFC brand in China. Grappling is not a foundation for many Chinese martial artists, and it could be years before we see a contender emerging from there. But the UFC under White has never been about short-term gain: They see the value in waiting for a payoff down the line.