Coming off a loss to Mike Swick in June, Marcus Davis will try to bounce back Saturday against Paul Kelly at UFC 89 in Birmingham, England. “The Irish Hand Grenade” shared some old boxing stories with Sherdog.com, as well as his thoughts on various topics from music to alcoholism to his meeting with Kelly.

Sherdog.com: Have you ever been rocked or knocked down during training or ever reconsidered fighting?

Sherdog.com: You spent a lot of time in boxing. What are some of those old-time memories?

Davis: One that just popped into my head: We were all in the gym one time, and there was this guy that was supposed to come in and spar with Dana Rosenblatt, who was an undefeated Jewish boxer at the time -- and there weren't a whole lot of Jewish boxers period, you know? So bringing this kid in, he was 5-0, and so they come walking in and he's got like this entourage and they’re screaming out, "Mikey D! 5-0 Mikey D!" All cheery as hell. The kid comes in and gets his stuff on. They start sparring. Dana hit him so hard with a body shot that the guy s--t himself.

There's just s--t pouring out of this guy's trunks. He ends up crawling out of the ring, and they rush him to the bathroom and he was so embarrassed, he didn't come back into the gym to get his stuff. He left right out of the side door, and they came in and gathered his stuff and they left. Never saw the kid again. I don't even know what ever happened with his career. I never followed him. I probably should have; it'd be funny to hear if he did any well at all.

You know, we had lots of different stories like that. A guy came in and was kicking a bag, and back then … you don't kick bags at a boxing school. My coach said, "Don't kick the bag!" The guy kind of looked at him -- he was a bodybuilder, the guy was all beefed up -- and he starts hitting the bag again, kicked it again and my trainer walked over to him and just smashed him right in the face. The guy actually broke down and started crying. Big muscle-bound guy broke down and started crying, looked at my coach and made an apology. We just have so many crazy stories about back then when I was boxing. It was just a different time. It was 15 years ago. You know the stories of scumbag promoters and stuff like that. There's good memories and bad memories.

Sherdog.com: What was the initial reaction from your boxing peers when you switched over to MMA?

Davis: They all thought I was insane. My coach at that time said I was going to be broke and penniless and I made the wrong decision. And now they call me the Nostradamus of MMA because I told them, "You know, this is where it's going to go. It's gonna be big. I'm telling you, it's gonna be big." 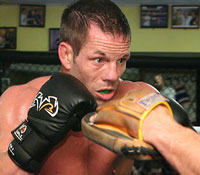 Dave Mandel/Sherdog.com
Davis' boxing peers thought he
was insane when he left the
sport for MMA.
Sherdog.com: What went through your mind the first time you were armbarred or choked out?

Davis: I was discouraged. I remembered the first time I ever grappled, I just got totally molested. It was like, I couldn't believe it was real because I saw the first UFC and I was like, "This is totally bulls--t." … I went into the Yellow Pages until I could find the name Gracie. I went and I got tooled. It was just crazy.

Davis: Not at all. The last one I saw was Ricky Hatton and Floyd Mayweather Jr. and Pavlik-Taylor [II].

Sherdog.com: A lot of MMA guys, there's two camps -- there's the really big fans and the guys that don't watch MMA at all. Where do you fall into the picture?

Davis: I'm a huge MMA fan, huge. I watch all the fights. I watch HDNet Fights. I watch EliteXC. I watch UFC stuff. I go online. I download fights. I go on the fight sites that you're not supposed to go on and stuff. I know them all. I go to all those places. I love MMA.

Sherdog.com: Out in Boston, you guys have a reputation for being ball breakers. Is that true even after a loss or is it very much a brotherhood?

Davis: No, we're pretty brutal. We make fun of each other as much as we can. It doesn't matter. If we show any type weakness whatsoever, you make a mistake, they beat you up. Jorge [Gurgel] right now is viciously, viciously verbally beating me because I wasn't able to parallel park very well in the city of Boston, and so he started calling me Paris Hilton. Every time he sees me he calls me Paris. That [came up] because I said in an interview on MMA Weekly radio, I referred to him as the Julio Iglesias of MMA. Everybody started calling him Julio Iglesias. So we're all always attacking.

Sherdog.com: In the rock community, you're either a Flogging Molly or Dropkick Murphys guy. Who do you prefer?

Davis: I love Dropkick Murphys. I like a lot of their stuff. I love "The Warrior’s Code" about Mickey Ward -- Mickey Ward used to be one of my sparring partners back in the day -- and "Barroom Hero" too.

Sherdog.com: Are you like Ricky Hatton and just get a belly from drinking Guinness when you're not training?

Davis: No, actually, I was a severe alcoholic when I was a boxer and when I first started MMA. I was drinking all the time. It'll be four years in January. I had to quit the booze. It made me a different person, so I don't drink.

Sherdog.com: No, that's a good thing. B.J. Penn said his game jumped to a different level when he stopped drinking.

Davis: It did with me too. When I first started in my MMA career, my first -- I don't know, probably four or five MMA fights that I had -- I was smashed out of my mind like the night before the weigh-ins. I always drank. It was just part of my lifestyle. Every time I had lunch, I had a beer. Every time I went out to eat, I had a beer. Whenever I wanted to go to bed, I couldn't fall asleep unless I had a six-pack. Every Friday, Saturday was spent just absolutely sloshed out of my mind.

Now I don't drink at all -- and it's not difficult for me at all. I've got good control over it; I'm never tempted. It's changed my life. I really think that chemically it's changed some things in my brain in the way I think and the choices that I make in life.