Many mixed martial artists train in 90- to 120-minute bursts. Such is not the case for Diaz and his older brother, Nick. By 9:30 p.m. on this night, they have already trained for an hour and a half. Diaz plays around on a heavy bag and waits, as Nick rolls with his grappling class. This will serve as Diaz’s next to last night of real training before he collides with Neer.

The gym’s warehouse-style setup allows for a full view of every corner. Displaced work wood and steel pipes further the industrialized feel. With the garage door raised to the ceiling, the humidity being produced by the fighters inside can be felt from the street lined with tightly packed cars outside the training center.

Diaz enters the ground level cage in the back of the gym. In the center of the cage, Cesar Gracie sits with two unfamiliar characters. The mat is blue, yellow and marked with wrestling boundaries. Diaz takes his instructor’s back for laughs.

However, the Stockton-native soon becomes embroiled in a real grappling war. Caio Terra, who won both gi and no-gi world championships at super featherweight this year, is one of the men in the cage and pressures Nate with his unparalleled jiu-jitsu. Gracie and the other man watch the brown belt hold his own.

Nick, taking a short break, holds the outside of the fence and relays instructions to his younger brother in a tone so low it could not have possibly reached Diaz’s ears. The fight goes back and forth, with Terra finding his stride in speed but struggling against Nate’s size and long limbs. In a scramble, Nate locks up a deep armbar, causing Terra to grimace as he defends. If not for his experience and rubbery arm that seemed to be missing a bone, he might have tapped.

Nate switches to a triangle. Gracie, dressed in his usual cargo shorts and sponsored T-shirt, calls “time” from his wrist watch.

Road to the UFC

This world-class training in middle-of-nowhere Stockton is what has crafted Nate Diaz (9-2) into one of the UFC’s hottest prospects at 155 pounds. Entering his appearance on “The Ultimate Fighter” reality series in 2007, he was already a hometown hero due largely to strong showings in the Strikeforce and World Extreme Cagefighting promotions. His family ties and his connection to Gracie added credibility to the MMA up-and-comer. Diaz’s early days were marked by patience. 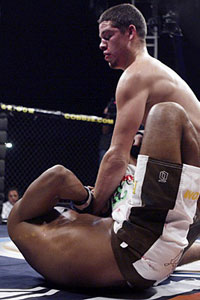 Jeff Sherwood/Sherdog.com
Early in his career, Diaz (top)
raised his stock with a hard-fought
loss to Hermes Franca.
“At the time, I would just go one step at a time,” he says.

An impressive battle with UFC veteran and then WEC lightweight champion Hermes Franca saw Diaz lose via second-round armbar. However, Franca’s stellar resume and the fact that Diaz troubled him in the first round empowered the young Californian and increased his stock prior to his appearance on “The Ultimate Fighter.”

With a brother who had already competed successfully in the UFC, it was a big jump for the younger Diaz -- a fighter marked more by shyness than swagger. Being that he started his career after “The Ultimate Fighter” boom, it only made sense for Diaz, who was largely unfamiliar with the barnyard shows and extensive tours in Japan teammates Jake Shields and Gilbert Melendez had experienced.

The loss to Franca forced Diaz to keep his mind in fights and analyze the mistakes that ended with his arm being locked up by the future UFC title challenger. He knew he had to try his best “not to f--k up and do something stupid, some stupid little thing like that, and train harder than everybody.”

With his MMA path paved in part by older brother Nick, Diaz was able to get through the reality show by following his gameplan and drawing upon his sibling’s considerable experience.

“I’m glad to be [Nick’s] brother, his teammate, training partner, and him being my coach and everything,” Diaz says. “Well, he’s a good guy to train with and look up to because he’s just the hardest worker. I don’t think you can find anyone that trains harder than Nick. I just try to follow footsteps, do everything he does, try to do it harder, which is pretty much damn near impossible. But I’m seeing whatever he does. I’m right there, and with training partners doing the same thing, coming up, you know?”