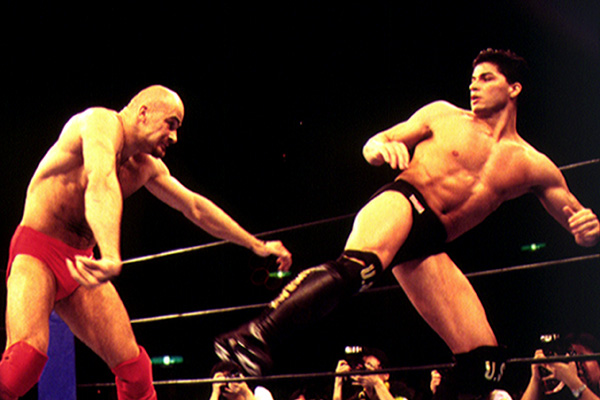 
It was all Steven Seagal’s fault. With a challenge in Black Belt magazine, circa 1992, the movie star had offered to take on anyone willing to fight him. It was exactly what Jason DeLucia was looking for, and the kid from Bellingham, Mass., did not hesitate.

“As a result of the challenge, it was answered in Black Belt by Bill Wallace and a few others,” DeLucia says. “He said anyone that wants to fight, come to my dojo and fight to the death, so I drove to [Los Angeles]. It took three and a half days with a friend of mine.

“I went to his dojo in West Hollywood. He wasn’t there, and his instructor wanted to answer the challenge for him,” he adds. “I said, ‘He put it in a magazine.’ I was just a kid and had no idea, so I just said I’m gonna come every day and night, and I sat, watched and waited for six or seven months.”

Running out of money and with the chance of the challenge materializing diminishing, DeLucia started to lose hope he would get his chance at stardom.

“I drove across country to do it, which was galling,” he says.

While on his vision quest to make Seagal fight him, he came across another fight offer from a gym located in nearby Torrance, run by the Gracies from Brazil.

“The offer was more on the books, very politely, in Black Belt,” he says. “I called up and talked to Rorion Gracie and he said, ‘Yes, we actually do this.’”

Known as “The Gracie Challenge,” the offer had long been a staple in Brazil’s martial arts circles, where the creators of Brazilian jiu-jitsu had been issuing it since the 1920s. In the wake of that long-standing challenge, the Gracies had achieved stardom in Brazil, defeating a long list of various martial representatives in such matches. And with the exception of judo legend Masahiko Kimura’s 1951 win over Helio Gracie, during which the much larger Kimura broke Gracie’s arm prior to the towel being thrown in, as Gracie would not tap, they always won. 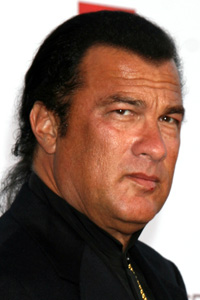 Nikki Nelson/WENN
Steven Seagal influenced DeLucia.
In the United States, however, the Gracies were unknown, so the challenge represented the kind of marketing designed to change that, unleashing what would become the “Gracies in Action” video tapes and, later, the Ultimate Fighting Championship.

DeLucia set a date with Rorian Gracie two weeks later to meet his brother, Royce Gracie, at the Torrance dojo and fight. The agreed-upon rules were no hair pulling and no eye gouging. Gracie won the battle handily, taking down DeLucia, trapping him in a topside triangle choke and striking him repeatedly prior to his verbal submission. It was a revelation for DeLucia, and he wanted to learn more.

“His right hand had duct tape around it. He punched me in the head and ripped the skin off my face. I just wanted a rematch,” he says said. “I knew if I got a rematch and changed strategy, I’d just need some time to prepare for it. I said, ‘I want to come back and do it again.’ [Rorion] said, ‘We’re doing this thing called the UFC.’ I’d only been out in L.A. for seven months and had already gone home. I had to think about, for about 30 seconds.”

Spawned on Nov, 12, 1993 in Denver, UFC 1 was the seminal event that would forever resonate in the minds of martial artists and combat sports enthusiasts. DeLucia, invited as an alternate, was on-hand hoping to get a chance to fight.

“We waited in the wings, and then they said, ‘You’re working tonight,’” says DeLucia, who submitted Trent Jenkins in his Octagon debut. “I hold the first rear-naked choke win in UFC history.”

Royce went on to win the eight-man tournament with three wins, including a submission of savate fighter Gerard Gordeau.

“It was pretty scary,” DeLucia says. “It was like ‘Enter the Dragon.’ Gerard Gordeau had done this kind of thing a billion times. His foot and hand were broken and about the size of a catcher’s mitt, and it was impressive knowing he was going to go out there and fight again.”

DeLucia was not slotted for the main card because he was not a champion and lacked a big name, but with a win under his belt, he was lined up nicely to compete in the UFC 2 tournament, also held in the Mile High City.

“In my first fight, I had a long fight with Scott Baker. I only got to Denver about three days before,” he says. “I was actually laying in a stretcher [afterward] trying to gasp.”

DeLucia had clearly evolved as a fighter, finishing Baker with strikes from a mounted triangle position, just as Royce had finished him at the challenge match in Torrance. His second bout with Gracie loomed.

“I wanted to surprise him at his own game, so I thought if I could put him down, I could take him out,” says DeLucia, who lost via armbar. “He was so much more ingrained in the ground game than I thought.”