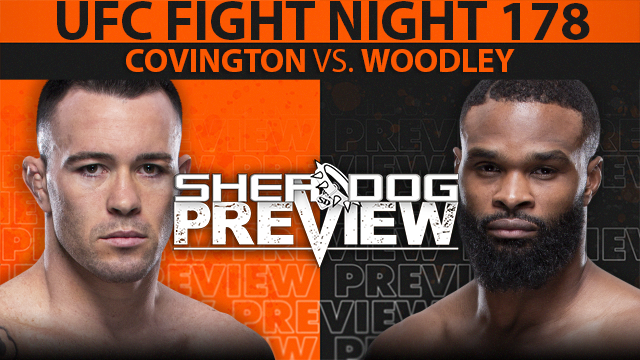 UFC Fight Night 178 on Saturday marks the Ultimate Fighting Championship’s last event in Las Vegas before it begins a month-long stint in the United Arab Emirates, and the promotional certainly put together a worthy farewell for its hometown. This is essentially a pay-per-view without a title fight on top, and in terms of depth, the main card may even top some of those offerings. The headliner is a long-overdue grudge match between Tyron Woodley and Colby Covington, and it is supplemented by a banger in the co-main event between Donald Cerrone and Niko Price. Add in top prospects like Khamzat Chimaev, Johnny Walker and Mackenzie Dern, plus the always-exciting Kevin Holland, and this one looks like a can’t-miss exercise.

Now to the preview for the UFC Fight Night “Covington vs. Woodley” main card:

This long-brewing grudge match had to happen at some point, but it does feel like it is occurring a year or two too late. That is particularly true on the Woodley side of the equation, as the former champion has seemed rudderless since losing his welterweight title to Kamaru Usman. It has been an odd career for Woodley, who certainly has an excellent resume but never quite had the right timing or promotional push to truly establish himself as a star or a well-regarded great. After coming over from Strikeforce, Woodley quickly had his momentum stalled by a loss to Jake Shields, and though he eventually rebounded with a breakout win over Carlos Condit, that came with a few issues of its own. For one, everyone loves Condit, so when “The Chosen” beat him via an injury stoppage—which also lessened the impact of the victory—fans were more than willing to use that as an excuse for why “The Natural Born Killer” lost, despite the reality that Woodley mostly handled the fight up to that point. Any momentum was quickly lost by another one-sided loss, this time to Rory MacDonald. Woodley did rebound with wins over Dong Hyun Kim and Kelvin Gastelum—the latter with its own asterisk, as it was a terrible fight against a drained Gastelum, who had been hospitalized during his weight cut—but it did not make for an overwhelming case when the Missouri native essentially declared himself top contender after a bout with Johny Hendricks was scrapped.

Somehow, Woodley’s holdout managed to work as the title picture eventually circled back to him, but he once again had the bad luck of trying to make his legend off of one of the most beloved fighters in the history of the sport: Robbie Lawler. After knocking out Lawler to become welterweight king, Woodley fought Stephen Thompson to a draw that was surprisingly fun thanks to a few big moments. It led to a 2017 campaign that essentially salted the earth for any hopes of Woodley becoming a fan favorite. Woodley’s rematch with Thompson was one of the most terribly disappointing fights in recent memory. Rather than learn from their successes in the first fight, each man just doubled down on preventing his opponent from exploiting any openings, leading to a staring match that saw Woodley essentially retain his belt by default. That led to a title defense against Demian Maia that was not much better. Woodley has always had an unusually conservative style during his UFC run. His cardio abandoned him in a Strikeforce title fight against Nate Marquardt, and Woodley’s eye has been on his gas tank ever since. As a result, he is notoriously always willing to back himself up against the cage, essentially daring his opponent to close the distance so Woodley can either blast him with an explosive knockout punch or control the fight with his wrestling. Against Maia, he chose neither. Woodley successfully defended all 21 of Maia’s takedowns but never looked to press the action further, doing the bare minimum needed to coast to a clear decision win. His 2018 title defense over Darren Till did at least show that Woodley could still blast an overmatched contender, but in retrospect, that may have been his last hurrah. Usman’s win over Woodley was shockingly dominant. The challenger basically had no respect for what Woodley had to offer in terms of power, and once Usman showed he was able to outwrestle the two-time NCAA All-American, the fight was essentially over. Heading into his against Gilbert Burns in May, there was hope that Woodley would look rejuvenated after a long layoff, and after all, Usman’s ability to nullify his wrestling did make the current champion a particularly tough matchup in retrospect. However, it was second verse same as the first. Burns got off to a hot start with his wrestling, and that seemingly broke Woodley immediately. It soon became clear that his only avenue for a win was via a huge knockout, and Woodley just looked too out of sorts to pull the trigger. Woodley’s style always walked a tightrope, but things have completely fallen off at this point and some serious answers need to be found, particularly since Covington represents another difficult stylistic opponent in the same vein.

Covington cruised along for a few years as a talented but unremarkable prospect. “Chaos” could reliably outwrestle whatever overmatched opponent was in front of him—save for a Warlley Alves guillotine— everyone would quickly forget and Covington would find himself without much traction. That went on for a few years until a breakout 2017 run. Covington started the year by winning what appears to be the retirement fight of Dong Hyun Kim, but it was his October encounter with Maia that saw things kick into high gear. For one, Covington proved he could actually be an exciting fighter. Faced with someone who could match his grappling skills, Covington suddenly showed off a fast-paced striking game that earned him an easy win. There was not much punching power or defense involved and the form was not the prettiest, but it was all enough to exhaust Maia and show that Covington had something else in his bag of tricks. However, what happened after the fight was the more notable event in terms of Covington’s career. The fight took place in Sao Paulo, Brazil, and Covington used his time on the mic to inform the Brazilian crowd that they were a bunch of “filthy animals.” In a post-Chael Sonnen and Conor McGregor world, this seemed fairly innocuous, but the Brazilian faithful pelted Covington with garbage as he was escorted to the back. That only emboldened Covington, who turned to a full embrace of the American right wing, which the UFC embraced in turn. After Covington used his pace and relentlessness to win an interim title against Rafael dos Anjos, the UFC immediately got in hype mode, even sending its new favorite son for a photo-op inside the Oval Office. Then a funny thing happened: Covington learned the lesson that many have before, that nobody comes ahead of the UFC machine. UFC 228 was coming up, and as the promotion was scrambling for a main event, the call was made for Woodley to defend his title against Covington. Only Covington, not expecting such a relatively quick turnaround, had some sinus surgery in the meantime, leaving him unable to fight on that date. Till got the shot instead, and the UFC seemingly held it against Covington that he was not on immediate call as the top contender, as he was eventually stripped of his interim belt and would not fight again for another year. The UFC was still content to push Covington come fight week, particularly the racial overtones heading into his title bout against Usman, but there was not nearly the constant promotional hum that existed just a year and a half prior. It has remained relatively quiet since Covington failed in his attempt at welterweight gold. Once again, Usman proved to be a nightmarish matchup for an opponent, winning a fast-paced boxing match forced a late stoppage. His career may not quite hang in the balance the way that it feels Woodley’s does, but Covington may need this win just as badly, lest he be taken less seriously.

There is not much to say here, as this appears to be a redux of Woodley’s last two bouts. Covington should get off to a fast start, and frankly, if Burns managed to have success with his wrestling, then so should “Chaos.” Honestly, that appears to be all it takes to send Woodley into a spiral of self-doubt, particularly since Covington has also proven to have 25 minutes worth of cardio. The only hope for Woodley? Some intangibles that do not appear on film. Maybe his disdain for his opponent is enough for the former champion to stay in an aggressive mindset and keep pulling the trigger on knockout attempts, even in a losing fight; or maybe Covington’s loss to Usman was the beginning of durability issues, without which his aggressive and defensively open style begins to fall apart. Based on the last few performances from both men, those are just hopes. The pick is Covington via clear decision.

Continue Reading » Cerrone vs. Price
« Previous The Big Picture: The Gray Area Between Cheating, Savvy Next By The Numbers: Colby Covington vs. Tyron Woodley »