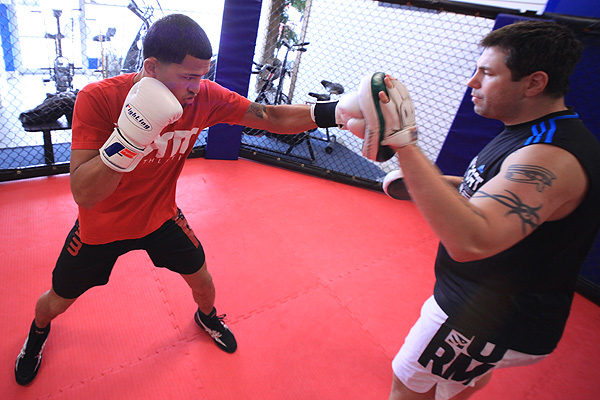 
He remembers his mother sitting on the sofa in an almost trance-like state, frigid and emotionless. The reflection of the TV screen fluttered off vacant eyes. His hair was still wet from showering after football practice, pads dangling in his hand as he came through the front door. Jeff “Duke” Roufus arrived home that afternoon like any other day, only it was not just any other day.

The request was simple enough, too. “Go check on the baby,” his mother said in a monotone voice from the living room. If only it was that easy. If only someone else had come home earlier that day. Roufus entered his sister’s bedroom, a carefree 15-year-old walking to a crib. What he was actually stepping towards was an unspeakable trauma that would forever change his life.

Such is the cold reality that slaps you across the face when you find your baby sister, Casey, lying on her stomach not breathing, her passing the result of Sudden Infant Death Syndrome. It was an event that permanently altered Duke, one of the world’s most decorated kickboxers and accomplished trainers.

It spurred a baseless, roving existence that overflowed with self-doubt. Much self-inquiry followed: “Why me? Why did I have to find her? Why was her life cut so short?” Rage and self-destructive behavior forced Duke to recoil and find himself. During his odyssey, he found his calling and happened upon a kindred spirit -- a fiery Latin teenager from Milwaukee’s south side who was boiling over with as much rage and resentment at the world as Duke once harbored.

Casey would be roughly the same age as Ultimate Fighting Championship lightweight titleholder Anthony Pettis today, if she had lived. Duke was never afforded the opportunity to be her big brother, but he was given the chance to be a second father to Pettis, whose own father was stabbed to death in a nightmarish home invasion in 2003.

Once Duke and his prized pupil found each other, they were able to salve their deep wounds. They started as two impossibly different men with a connection only they can fully fathom. Their unbreakable bond was forged through shared unthinkable hardships. Duke and Pettis understand loss; they understand pain; and they understand fear.

From the outside looking in, people might make the mistake of thinking Duke never feared anything. In fact, he once held a grave fear of infants, a wicked residue from the day he found Casey dead. From the outside looking in, Pettis might seem unafraid of any man. In fact, he once feared himself, when a raging, twisted beast stirred inside, left over from an internal battle he waged to seek revenge for an unsolved murder.

That commonality paired Duke, the rugged, old-school white guy and one of seven children, with Pettis, the tough, snarky Latino who was raised on the credo of the streets.

Duke pushes against an afternoon he would like to forget. Pettis embraces a night he will always remember. Together, they form a team that has plowed through virtually every obstacle it has faced. Theirs is a most unique relationship.

“
I’m a firm believer that
martial arts changes and
saves people’s lives. It saved
mine. I really do believe it
saved my life because I was
a kid out of control.

“I can’t explain what it is and why it is, but Duke knows what I’m thinking and what I feel; it is like he can step inside me,” Pettis said. “I know Duke’s coaching isn’t for everyone. I’ve seen so many guys come in and out of his gym. It’s why I say our connection is so special. Duke’s personality and passion is special. He has so much information in his head that it all spills out. I remember he was telling me things when I first started that I had doubts about; now I’m doing those things like they’re second nature to me. I don’t have to see him. I could feel Duke’s strong presence in my corner.”


Duke carried the burden of being the son of Patrick Roufus, who introduced him to tae kwon do, and the grandson of John Roufus, a balls-to-the-wall Purple Heart winner who survived the Battle of the Bulge. Duke was training at 4 and competing by the age of 6, like all of the other Roufus boys before him. He also happened to be the third-eldest of seven children. He was the third boy, with two older brothers and a couple of uncles who were close to the same age living a block away.

“So it was like having four older brothers,” the 43-year-old said with a hearty laugh. “Kids like me spend a whole life, it seems, getting beat up by older brothers. I could take a tongue lashing, and after a while, you get pounded so much that you go numb. It actually helped me fighting, because you get numb when you’re fighting. You don’t feel anything.”

Seven children or not, Pat Roufus was going to make sure his kids had whatever he was capable of giving them. They squeezed four in a room of their modest two-bedroom home. Pat worked tirelessly to get Duke into Milwaukee’s prestigious Marquette Prep, one of those secret handshake schools. He then worked tirelessly to keep him there. Duke had understandable trepidations. He walked to school while all his friends drove their own cars and wore the hand-me-downs that no longer fit his brothers. It had at one time all been peripheral nonsense to Duke. He had wrestling, football and tae kwon do -- a passion fostered by his father and his family. He had discipline and focus. That all changed the day he found Casey.

“My mother knew and was just sitting there in shock,” he said. “It crippled me in a lot of ways. It was a tough experience. I know things like that force you to become tougher, but I was a 15-year-old kid who just found his sister dead. It changes you. I was wrestling my sophomore year in high school; then I got booted off the team because I was zombie. I couldn’t concentrate. I couldn’t do anything. I was just there.”

Duke was an empty container, a kid about to spiral off course. He was quite literally a walking Code Red.

“There was a rage there. That rage that I had, I didn’t like it because I would turn red in real fights. I was forced there from an emotional hangover. My brothers used to push me there a lot,” he said. “Even after my sister passed away, my brothers would push me to the point where my father would have to pull me off of them. That’s how charged up I would get. I didn’t like that, but that’s the way I was. The rat will find his way out of the corner, and that’s what used to happen to me.

“I grew up in the 1980s,” Duke added. “I grew up hard, and unfortunately, I knew some kids that got caught up in the drug game. I did some stupid, stupid stuff and experimentation with things I shouldn’t have done. I remember one of my brothers said to me I was the kid that behaved like an only child. I was a nomadic child when I was younger.”

Redirection was a process that included a sojourn in Thailand to master muay Thai. The path also involved some pounding. Duke used to attend two different gyms where fighters lit him up routinely. He often went home with a quivering lower lip, though a little voice inside his head kept asking, “How bad do you want this?” He returned the next day and kept coming back for more.

However, it can all be traced his foundation -- taekwondo, which included working the corner for the legendary Rick “The Jet” Roufus, a six-time world champion kickboxer. Duke revered his older brother. Rick’s career took off after he stopped John Moncayo in the seventh round at Karatemania II in Atlanta on April 16, 1987. It was Rick’s first world title and served as the revelation a then 17-year-old Duke needed.

“I grew up at the fights. Chuck Norris is a family friend and a great guy, and I was around the fights my whole life,” said Duke, who made a guest appearance on the final episode of Norris’ popular “Walker, Texas Ranger” television show. “I’m a firm believer that martial arts changes and saves people’s lives. It saved mine. I really do believe it saved my life because I was a kid out of control. I’m blessed. I learned early to throw everything into MMA. It’s where I found direction again and learned to put things behind me.”

Finish Reading » “They never found the guy that killed my father. I could let that rage tear me apart. Not knowing who did it, I’m comfortable with it. I don’t want to put a face in front of it for all of this rage. The guy that killed my dad has no idea what he created.”