In Brazil, where an estimated 50 million people live in favelas, or slums, it’s common for a child to dream of changing his or her life through sports.

In years past, kids have aspired to follow in the footsteps of soccer idols like RomÃ¡rio and Ronaldo, both of whom were born in the Rio de Janeiro favelas. Nowadays, the popularity of mixed martial arts in Brazil and the growth of its international market have attracted more athletes from these poor communities who aim to become the next Wanderlei Silva, Antonio Rodrigo Nogueira or Anderson Silva.

Growing up in Vila Cruzeiro at the Complexo do AlemÃ£o, the most violent favela of Rio de Janeiro, Andre Santos never lost sight of his goal to become a champion. Violence, a lack of money and the tempting proposals of drug dealers constantly knocked on his door, and Chatuba had to fight hard to avoid the criminal element. Today, he’s considered one of the biggest revelations in Brazil’s 183-pound division.

“I was born and raised with many guys who went towards the wrong life, but I chose the path of being an athlete while they chose another way and I respect them,” says Chatuba, who began training in the style of Luta Livre, or “free fight,” thanks to a social project organized by Marcio Cromado Barbosa, founder of the RFT team. Chatuba was one of 120 local children who trained for free under Barbosa and one of his students.

Before accruing his impressive 13-1 record, Chatuba honed his craft at RFT’s headquarters in the distant Botafogo district.

“Many times, I had to cancel traveling to my training because of confrontations between the police and the criminals close to my house,” says Chatuba. “I felt like I was in a war zone. Young men who live here must have the will power to not succumb to drug dealers’ offers and follow the wrong path. I saw many friends who trained with me surrender. Today, many of them are dead or in jail.”

Chatuba’s idol is UFC middleweight champion Anderson Silva, a man the young fighter hopes to emulate by breaking into the competitive ranks in the U.S. or Japan.

“Anderson Silva had many difficulties, and today he can offer his family a better life by being a fighter,” says Chatuba. “My dream is to fight in the U.S. or Japan and earn money to live better.” 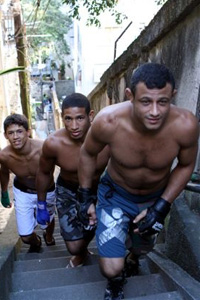 “I am Spider Man, you are Marlon and he is Hacran.”

In the slums located on the hillside of Santo Amaro, a district close to downtown Rio de Janeiro, children usually play by mixing the heroes of fiction with their real-life counterparts. That’s a fair comparison. After all, their heroes fight and defeat everyday villains, like hunger and violence.

To achieve his comic-book status among children in the community, Marlon Sandro had to break down many barriers. Raised without a father, Sandro tried soccer. However, at the age of 13, he found his true calling when his uncle brought him to Flamengo to train, and he knocked out a boy named “Capeta” on the field.

“Everybody was afraid of the guy,” recalls Sandro.

A life in fighting was still a few years away, though.

Working in a business office, the 17-year-old Sandro was introduced to Brazilian jiu-jitsu legend and Nova UniÃ£o team founder André Pederneiras through his friend, Hudson. Though Hudson put Sandro on the right track, he did not live to see his friend’s success. With the support of Pederneiras and fellow fighter Rafael Carino, Sandro persevered and, in addition to amassing his unblemished 14-0 record, he opened a place that has offered free lessons to the children in his community since 2003.

“I want to give them the opportunity that I have not had,” says Sandro, who supplements the rent by working as a lifeguard.

Sandro, who has enjoyed two recent wins in World Victory Road’s Sengoku featherweight tournament in Japan, notes that his program has prevented many children from turning to a life of drug dealing.

“It took many children away from crime life, but I lost a boy who I thought would be a phenom. The kid ended up being murdered,” says Sandro.

Sandro’s cousin, Hacran Dias, and Eduardo Dantas, called “the young devil” in the ring, are two of the undefeated fighter’s most promising students.