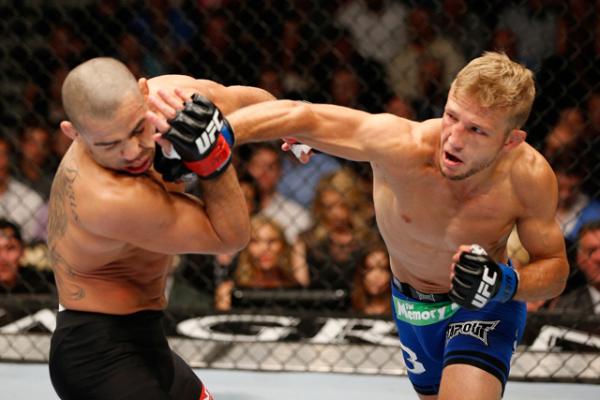 
When one thinks about what it takes to be a title contender, T.J. Dillashaw’s ascent to bantamweight champion becomes about as unlikely a story as can be found.

Consider the usual metrics to vie for the title. Ideally, it is a combination of fan-friendliness and spectacular meritocracy, where a fighter earns his hype and popularity through elite performances. There is an emphasis on the word performances, plural, meaning the challenger rides the momentum of a winning streak, hopefully with some top-shelf talent on the victim list. If not, at least she or he as many finishes as decision wins, something to sell to make casual fans believe in his or her legitimacy.

Absent a consensus of earning a crack at the title, history has shown that hype and popularity alone will suffice. Athletic competition is a business, and even if only half of that definition is fulfilled, it will work; fans still flocked to see Chael Sonnen get predictably decimated by Jon Jones.

Now consider where Dillashaw was leading up to Sherdog.com’s 2014 “Upset of the Year” at UFC 173 on May 24. Though he had a respectable 5-2 record in the Ultimate Fighting Championship, both of his ranked opponents had beaten him. As for his five wins: His opponents had a combined 11-15 record in the UFC, with all but one of them towing a sub-.500 record inside the promotion. Even if you concede Dillashaw probably deserved the nod over Raphael Assuncao at UFC Fight Night “Maia vs. Shields,” it was hardly a performance that had fans clamoring at the thought of him in a championship match. In short, he looked more like he was en route to becoming another “Ultimate Fighter” alum gatekeeper; and a decision win over a Mike Easton who was coming off of two straight losses was a far cry from a title eliminator.

In terms of popularity with fans, Dillashaw was recognizable as a finalist on “The Ultimate Fighter 14” but only as much as being knocked out convincingly on the biggest stage warrants. Stephan Bonnar was popular, too, but nobody thought he deserved to be a title contender. In the same way ancient warriors believed they absorbed the power of their enemies by beheading them, modern fight fans today can switch allegiances to the person who demolishes the fighter for whom they are rooting. At “The Ultimate Fighter 14” Finale, John Dodson’s thunderous knockout carried with it the transferred support of many former Dillashaw fans.

Barao, on the other hand, had not tasted defeat since his professional debut -- a streak that totaled 33 fights. While a record as gaudy as that will undoubtedly have some tomato cans on the list, his UFC wins included several big names in the division, including a rout of Dillashaw’s Team Alpha Male teammate Urijah Faber just one fight prior. To boot, Barao noticeably improved in each consecutive fight after he won the interim belt, finishing three opponents in a faster, more devastating way each time out. Dillashaw was a cog in the process of waiting for Dominick Cruz’s return, and the betting lines showed it: Barao was listed as high as a -1215 favorite, with an expected win probability of 92 percent.

Dillashaw’s biggest accomplishments in the UFC were coming in second on “The Ultimate Fighter” and losing a slightly controversial fight to a top-10 opponent. Barao’s biggest accomplishments were three title defenses and dominating Dillashaw’s most renowned stablemate twice. By any objective measure, Dillashaw literally had no business being in the cage with “The Baron.”

Yet it took Dillashaw a minute and a half to rebut all of those arguments, as an overhand right sent Barao crashing to the mat. Though the fight would last the better part of five rounds, the Californian had it won from that point on.

“The Baron” was painfully ineffective. Dillashaw continuously beat him to the punch, moving in and out of range seamlessly while tagging Barao with a diverse barrage of swift punches and kicks along the way. Barao was perpetually on his heels, finding himself bullied against the fence and eating heavy leather more than once. When the championship rounds arrived, viewers were equally surprised by both Dillashaw’s performance and the fact that Barao was still standing. Not to be denied, the soon-to-be champion topped off four landslide rounds with a career-defining highlight finish midway through the final frame, blitzing the Brazillian with a head kick-left hook combination that led to fight-ending follow-up punches. Dillashaw did not eke out or even grind out a victory; he utterly and comprehensively dominated a pound-for-pound great. The oddsmakers were right about how lopsided the fight would be; they just had the names wrong.

The newly christened champion went on to prepare for Barao’s immediate rematch in what was arguably the most anticipated fight in the young division’s history. Despite a near-flawless performance throughout the entirety of the fight, whispers of it being a fluke phenomenon gained traction. Dillashaw did not simply look perfect -- he looked too perfect, to the point it was doubted whether or not he could fight like that again. However, fate had other plans, and Barao failed to pass the weigh-ins, making Dillashaw’s first title defense against late replacement Joe Soto at UFC 177 on Aug. 30. Almost as an homage to his title-winning performance, Dillashaw ended the fight in an eerily identical flurry, finishing Soto with a head kick and punches halfway through the fifth round. Meanwhile, Barao got back on track with a solid-if-not-spectacular win against a tough Mitch Gagnon on Dec. 20, keeping his name in the mix as a relevant force in the bantamweight division.

Great narrative tides are moving in this rivalry, as serendipitous injuries to Cruz and Assuncao have paved the way for the rematch to finally happen in 2015. If it does, do not be surprised to see a similar betting line leading up to the fight, though it seems unlikely Las Vegas will make the same mistake twice.