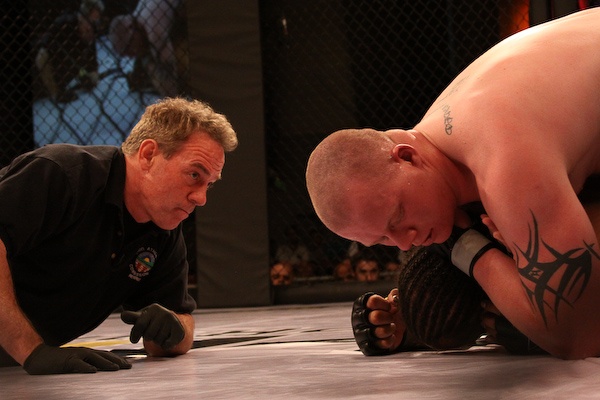 
There may not be a more thankless job in the world of mixed martial arts than that of a referee. Mistakes are rarely forgotten, especially when they are associated with stopping a fight too soon or too late. Referees often walk the tightest of tightropes, as the slightest lapse in judgment can carry serious consequences in a sport where Monday morning quarterbacking runs rampant among fans, media and even the fighters themselves.

The latest installment in the Sherdog Top 10 series shines the spotlight on the best referees in MMA.

Ohio-based Matheny might not be the most recognizable referee in the world, but he is clearly among the best. He’s pushing 60 and has been around MMA since the earliest days. Matheny has a reputation for being one of the fairest refs in the business. He has seen it all in his many years as a third man.

A few years ago, during a bout on the OFC 20 “March Massacre 2” card, Matheny watched as Joe Fisher was choked unconscious by a Caleb Frasher rear-naked choke in 36 seconds. Fisher collapsed to the canvas and Matheny stopped the fight, thinking it was business as usual. Before Matheny could assess the fallen fighter’s condition, Fisher’s mother had already scaled the cage and climbed into the realm of combat to rescue her son. Police had to escort her out of the cage, but everything wound up being fine in the end.

Matheny has refereed countless fights in Strikeforce, UFC, and everything else in between. He was praised for the way he officiated the first Ronda Rousey-Meisha Tate bout, and it’s rare to hear a fighter say a bad thing about the sixth-degree black belt in Japanese jiu jitsu.