The scene was unforgettable, if for no other reason than it was so implausible. But it was real, and as the newly crowned champion leaned over the ropes to give press row an earful, they could only sit there and take it, something they were woefully unaccustomed to.

“I am the greatest of all time!” shouted Cassius Clay-cum-Muhammad Ali.

A 7-1 underdog, the brash Clay had gone into his match with feared Sonny Liston seemingly whistling a tune of optimism while headed to the graveyard. Prefight performances suggested a high-priced slaughter of a clueless lamb -- albeit an excessively talkative one -- as the world awaited the comeuppance of a loudmouthed challenger who’d gravely overextended his hand.

That’s what Chael Sonnen brings with him into the Octagon in his challenge Saturday of middleweight champ Anderson Silva at UFC 117. If you think Sonnen has done too much talking leading into the fight, imagine if he actually turns the trick. Like Ali, it’ll probably be enough to transcend the realm of mere fight aficionados and capture the imagination of the larger sporting world. Also like the “Louisville Lip,” we’ll probably get a whole new level of Sonnen’s chatter and he’ll have earned the right to do so.

Silva, like Liston, has created an aura of invincibility. The Brazilian’s pinpoint striking and ice-cool demeanor have fueled the longest unbeaten streak in the UFC’s history. Now he’s approaching the dreaded “U” status -- unbeatable. 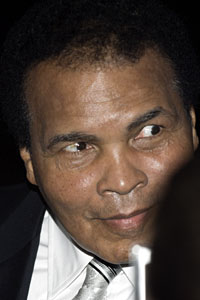 Scott Doctor/Splash News [Click to Enlarge]
Ali was no clueless lamb.
Like Liston, who wrecked the heavyweight division en route to hammering Floyd Patterson twice in one-round blowouts to take and make his sole title defense, Silva’s style is a grim riddle for any prospective challenger. His standup is far superior to anyone in the 185-pound division. His sole weakness -- wrestling -- is counterbalanced by an intuitive sense of jiu-jitsu, precision counters (check the switch he hit on Nate Marquardt or the side-control-to-guard he put on Dan Henderson) and a granite chin. There is no existing footage of Silva, a veteran of 30 fights, of being visibly hurt.

Yet like Liston, he can be solved, as any fighter can. It’ll just take a guy with the brain and balls to do it.

Sonnen has the skill set to beat Silva. Although the wrestler has proven susceptible to submissions, his UFC resume is impressive of late. His striking, functional at best, is used for the most part to set up his excellent takedowns and top control. In recent fights he also showed the kind of hard-nosed approach that dominated divisional stalwarts like Yushin Okami and Nate Marquardt.

Sonnen’s mouth has written a huge check, and Saturday night will see whether or not he’s got sufficient funds to cash it. Regardless, Sonnen’s trash talk leading into the fight has elevated an otherwise pedestrian defense into a largely marketable affair. It’s going to be a highly entertaining event precisely because Sonnen has positioned himself as the brash challenger, unfazed by the game’s most intimidating fighter.

Trash talk is an art form, one largely underappreciated for the sheer possibilities it offers. If Sonnen wins, his prefight verbosity will seem some sort of Mad Plan That Actually Worked, enhancing his stature to a degree we can only contemplate.

For all his greatness, Silva remains a somewhat impenetrable puzzle. He speaks limited English, which makes him fairly remote, and his greatness can only be conveyed to the eye of the casual fan through Bruce Lee-like highlights (witness his destruction of Forrest Griffin) and testimonials of those who can translate and speak for him. Sonnen, meanwhile, is a clean-cut Republican from Oregon who will never lack for a sound bite. Life is unfair, but then again, that’s life.

In the spirit of Sonnen vs. Silva, here’s a look at some of the best trash-talk buildups along with analysis of the ensuing fights and whether they lived up to the hype.