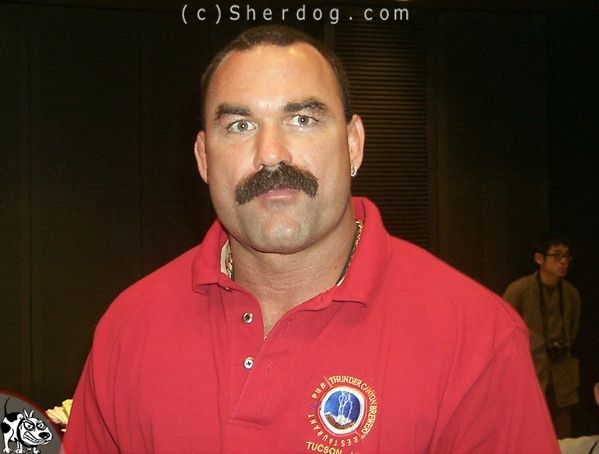 Don Frye is a one of MMA’s most beloved characters. | Photo: Sherdog.com


Mixed martial arts pioneers come from a rare lot. They are a special trailblazing breed that helped pave the way for today’s MMA stars. They are the reasons why contemporary MMA icons are not living the vagabond life out of suitcases, having to use any means of fighting, both real and fake, to make a buck.

Don Frye was one of them.

“The Predator” came up prior to the cage era when MMA was just crawling out of its infancy by mainstream standards and making its way to the larger masses. Guys like Frye, who embodies a larger-than-life cowboy persona with a matching booming husky voice, made it possible. If there is a real-life Yosemite Sam -- substituting the red whiskers for a bristling, black mustache -- it is Frye. Rawhide competitors like him had to endure balancing professions like pro wrestling in Asia with real fights everywhere else, including high school gyms with makeshift rings, and were reluctantly forced to accept peanuts for pay. Sometimes, they received nothing at all in return.

Frye has had so many fights and been so many different places around the world that his epic battles sometimes tend to meld together. However, there are indelible memories that stand out in Frye’s mind, like being idolized in Japan and having someone go as far as asking him for his signed underwear; or battling an eye-gouging Gilbert Yvel a few weeks after 9/11 in Osaka, Japan, or Cyril Abidi three months later in Saitama, Japan.

“I was big in Japan for a while there, and it’s a super polite society and here I come, a [expletive] redneck from the southwest that’s not used to polite society, except for my wife and my father,” Frye said. “Besides that, I was born in a barn. All of that concrete in Japan is a hell of a thing, you know, especially when you’re used to living around grass your whole life.

“I do have to say that the air conditioners in Japan aren’t worth a s---,” he added. “I remember one time, Brian Johnston, Brad Rheingans and I are pro wrestling in Japan, and we met on the elevator together and Brian is madder than hell: ‘When I get back to the USofA, I’m going to invest in some control temperatures that rise up and down and send them to Japan.’ All the air conditioners were set on low in Japan -- like a small breath.”

Frye’s first MMA experience in Japan was in November 1996 against Mark Hall. He angered some people by taking the fight since it was in such close proximity to the Ultimate Fighting Championship’s “Ultimate Ultimate” event in December of that year. Adding to the ire was the fact that Japanese promoters took the “Ultimate” name.

“I fought that [expletive] idiot Mark Hall for the second time after I beat him in July [in the UFC 10 tournament quarterfinals],” Frye said. “I took it easy on him the first time, and that came from, I thought, being overly impressed with myself. The guy was maybe 198 pounds and here he was fighting ‘the great Don Frye.’ Back in those days, everything was new -- promoters, everyone. You went along. They bring you over there to Japan, have you sign all of these shirts. They use those signatures to make money. They’re really smart. They did stuff I should have thought about doing.”

“We all had a great time on the trip, and the only thing I could remember bad about it was I banged up my hand, I think, on Hall’s hard head,” Frye said with a laugh. “It’s the first time I took Vicodin for the pain, and I was stoned out of my mind, man. Again, it was a different time and you did what you had to get by. I just remember the Japanese being great people, and I’ll always remember how they treated me.”

Oftentimes, they treated him better than he was treated in the United States. 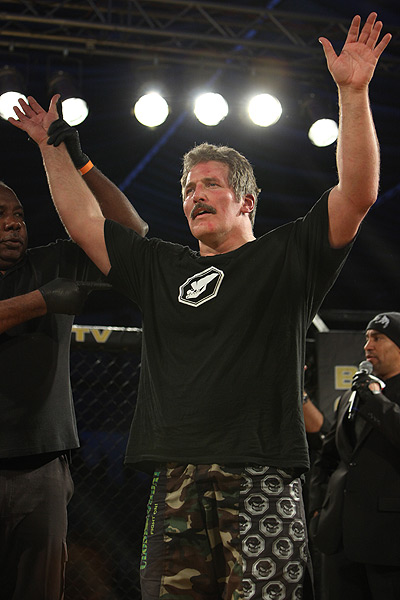 
Frye found MMA through Dan Severn, who used to coach Frye when he wrestled at Arizona State University. Severn hooked him up with a number of fights across the country. One was in Atlanta. It was supposed to a “black-tie affair,” with first-class treatment in a swanky, upscale hotel.

“Dan called me up and told me everything and how they were going to have this big cocktail party with caviar and champagne, and they’ll have the ring set up in the center and you’ll be the entertainment for the rich people,” Frye said. “So I get there. They pick me up in a limo and we’re on our way to the fight. The guy in the front seat turns and says, ‘Oh, by the way, we can’t pay you.’ I didn’t know what to think. Then I thought, ‘I came all of this way to fight, so I better fight someone.’”

Frye arrived at a warehouse. The glitz wore off fast. Frye was greeted by tiny dressing rooms that were sectioned off by blue, plastic tarps hanging from strings. Frye watched as two fat guys went at it for more than an hour.

“I’m like, ‘Holy balls!’ And the guy they wanted me to fight was a former navy seal,” Frye said. “He was only like a buck 85 or so. He comes up to me and says, ‘Hey man, we’re not getting paid of this.’ So he was like, ‘I won’t punch you, if you don’t punch me.’ That sounded fair to me, partner. I submitted him in a keylock; but it told me something, too. I didn’t think about it too much until later -- the guy who is willing to fight for nothing is someone who loves to fight.

“There are so many guys who get into this for the money and not the love of fighting,” he added. “I don’t think those guys last very long. I think it’s why I did last as long as I did, because there was always a passion to fight. That, to me, is a real fighter.”

Soon after the experience in Atlanta, Frye was engaged in another fight-for-free engagement in Michigan involving two-out-of-three falls. Frye, of course, won.

“I pinned the guy twice, and Ken Shamrock was there; there were a couple of big names there and they would fly me to these different places, paying for my expenses but not paying us at all,” Frye said. “When you plan on doing something, by how I was raised, you do it, whether you’re paid or not.”


Frye remembers another fight in clear detail. It happened during a horrendous, volatile time in the world and in American history -- two weeks after 9/11.

He received a call to fight for Pride Fighting Championships in Japan. During this same time, Johnston suffered a stroke in August 2001, and Frye was asked to finish Johnston’s pro wrestling tour. A lot of fighters have a difficult time acclimating to the time-zone changes. Frye is one of them. He always tried to make it a habit of arriving five to seven days prior to a fight. He had already pulled his groin muscle training.