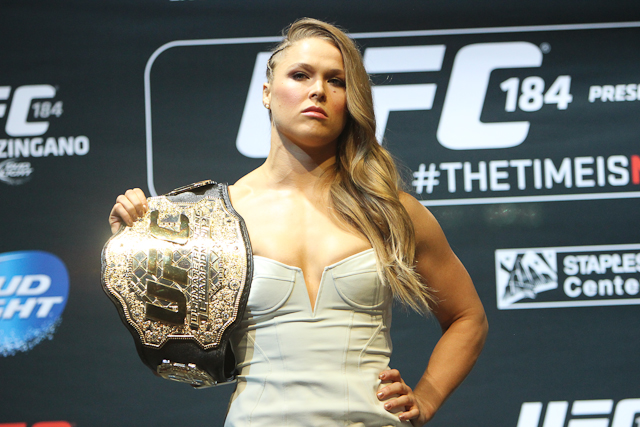 There's lots of talk star power in MMA; Ronda Rousey might have more than anybody. | Dave Mandel/Sherdog.com

MMA discussion in the first two months of 2015 was almost entirely predicated on the myriad drug test failures of high-profile MMA fighters. In the wake of UFC 184 and Bellator MMA's announcement of Kevin “Kimbo Slice” Ferguson-Ken Shamrock, the conversation has quickly shifted to one about “star power” and “crossover appeal.” Ronda Rousey's record-setting 14-second demolition of Cat Zingano is expected to surpass pre-fight PPV buyrate expectation, while the UFC's top competitor has re-energized a bout from seven years ago, featuring two of the sport's most recognizable faces, for better or for worse.

Between Rousey, Shamrock, Kimbo and beyond, readers are filled with questions. How big of a star is Rousey really and more importantly, when is she going to fight “Cyborg”? Will Shamrock even get licensed to fight Kimbo and if he does, how embarrassing will it be? What's the deal with former UFC heavyweight champion Brock Lesnar lately and what does it mean for WrestleMania?

Most importantly, when is Jose Canseco coming back?


Ronda Rousey is, without question, the best female fighter ever. With the positive estimates for UFC 184's buyrate, it seems like she's also one of the biggest stars the sport has ever seen. I'm curious if you think her success is sustainable. Will people keep buying her pay-per-views if they know it's going to be a Mike Tyson-type blowout and last not just less than a round, but maybe just a few seconds? Does her growing star power help or hurt the chances of her fighting Cristiane “Cyborg” Justino? -- Greg from Florida

Jordan Breen, administrative editor: First thing is first: I have no beef with your assertion on Rousey's greatness. She's not only the most accomplished woman ever in the sport, absolutely decimating a historically strong division in unprecedented fashion and humiliating all of her peers in record-setting fashion. She's a phenom. Onto the next.

Regarding the UFC 184 buyrate estimates, we still need to wait and subsequently take the number with a grain of salt. All indicators are that it will surpass the 300-350,000 estimates that people put on it pre-fight, and that number, regardless of it whether it is 400 or 500,000 buys, is a huge boon for Rousey and the UFC. As you correctly point out, sustainability is the real question. It was an amusing part of the post-fight, viral path of Rousey-Zingano, seeing major celebrities passing along the entire Rousey fight to their fans and followers via Instagram and other social media platforms. We invoke the Mike Tyson comparison whenever a dominaint champion blows their opposition out of the water in record time, but when Tyson rose to prominence in the late 80's, there was no Twitter, Instagram, Vine and the like. It's entirely possible that the appetite for a fight product so succinct has changed, and that folks are content to catch the finish at their convenience, in the palm of their hand.

Even if that is the case, I don't think there will be some massive dropoff in interest for Rousey fights. Her championship defenses against Contender X will still probably draw in the 300-350,000 range at least; there is an expected floor for a legitimate UFC pay-per-view, and it's higher for a bona fide star like Rousey. More crucially, she is able to galvanize channels and realms of public interest that other athletes do not. After all, she was doing interviews with Oprah before she even fought MMA.

The question is whether or not an average Rousey fight can exceed those expectations and capture hearts and minds at a greater level. Even if Rousey can draw 350,000 buys every time out, can fights against women like Jessica Eye ever drum extra interest? If no sudden, thrilling challengers come along, her dominance will serve to reinforce her ceiling as a pay-per-view draw.

That is, of course, unless they can nail down a fight with Justino. It seems that the Brazilian is never going to be able to weigh in at a healthy, fit 135 pounds to fight for Rousey's bantamweight title, especially with her social media post this past week that shows her standing on a scale, purportedly weighing 175 pounds. It will likely require Rousey to fight at a 140-pound catchweight, or move all the way up to 145 pounds.

At present, there is no real reason for Rousey to push for the “Cyborg” fight, other than bragging rights. If allowed to simmer while Rousey knocks off a few more challengers, it could legitimately morph into a PPV that does 700,000 or more buys. Even without an introductory fight in the Octagon, it's isn't exactly hard to tell or sell the story of Justino being the real, honest-to-goodness threat to Rousey. It will come down to whether or not the UFC can offer Rousey a deal that compensates her for the risk in giving up weight to Cyborg. If 18 months from now, we're completely bereft of challengers for the “Rowdy” one, that might not seem so far-fetched.

Sometimes we have to wait for what we want in the fight game; it took us seven years to actualize Chuck Liddell-Wanderlei Silva. It might take a while, maybe two or three more Rousey defenses. You know, a whole 80, 90 seconds of combat.